"Demons run when a good man goes to war." 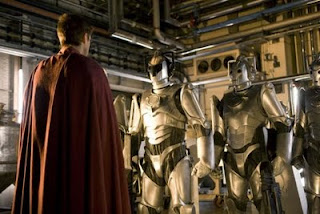 One of the criticisms that I have often read of Doctor Who since Steven Moffat took over as showrunner is that the series seems to have moved away from straightforward storytelling towards more oblique narratives. Rather than have every episode by relatively self-contained, apart from the obligatory continuity from episode to episode, the show now hints at future events, leaving pieces of the puzzle for people to pick up and fit together themselves at the expense of the individual episodes. It's a criticism that I think is perfectly valid, and it certainly seems to fit the current series, which has leaned very heavily on cryptic clues and insinuation wherever its arc is concerned. I, for one, found "The Impossible Astronaut"/"Day of the Moon" two-parter a little hard to digest when I first watched it, and felt that it was more concerned with addressing the Silence arc from last series and setting up the current arc than telling a wholly satisfying story. It was still a lot of fun, but I didn't quite know what it was about.

However, "A Good Man Goes To War," which acts as both the mid-series finale and the first-half of a two-parter that will resolve when the show returns in the Autumn, justifies this model for the show by showing how well those disparate strands can be brought together. It seems clear that Steven Moffat knows where his story is going and that he wants the show under his reign to function more or less as a grand narrative consisting of smaller stories. Whether or not the way that The Doctor brought together figures from previous episodes to help him rescue Amy and Rory's baby, Melody, was part of a grand vision or just a case of him trying to give the impression of a grand vision is up for debate (I could have done without the suped-up WWII planes, personally) but I got the sense that Moffat is trying to do with Doctor Who what Joss Whedon has always done on his shows; create a consistent world in which characters can flit in and out without it feeling unnatural.

Anyway, that's enough theory, what about the episode itself? I thought it was pretty great, both as an individual episode and as a piece of the larger puzzle. On the individual front, it was a swift, pacey story that hit the groun running with a quite, quite frankly, fucking badass sequence in which Rory, bedecked in centurion armour once again, stared down a group of Cybermen (serving as a plot device, rather than antagonists, which was nice considering how over-used they have been), asked them where his wife was, then relayed a 'message' to them from The Doctor. And by message, I of course mean that more or less their entire fleet exploded. There are some episodes of Doctor Who that have me hooked from the get-go, and some that have to work at it. This was definitely the former.

From there, The Doctor and Rory assembled their super team which included a Sontaran, a lesbian Silurian and her human partner (which made for a "I'm surprised they snuck that on at tea time" sight gag about her lizard tongue), the blue, fat and old information and artifact trader Dorium (who I was sad to see killed off, because I like the idea of a character existing in that universe who can play off multiple sides to his own advantage, rather than the more stark archetypes that the series falls back on) and even the pirates from "Curse of the Black Spot". River Song (Alex Kingston) says that she can't help, though, because she knows that the Battle of Demon's Run will be the moment when The Doctor rises higher than before, only to fall, and it is also the moment when he discovers who she is. (More on that in a moment.)

So, The Doctor and his gang take over the Demon's Run space station, send all the troops and their Headless Monk (or Ring Wraith) allies packing, and everything seems to be going just smoothly, with Amy and her baby rescued and reunited with Rory. And only half an hour of the episode has passed. To paraphrase Homer Simpson, things wrapped up earlier than usual.

Obviously, the story didn't end there. It was all a trap set up by the Eye-Patch Lady (Frances Barber) who, it is revealed in a video-conference with The Doctor, plans to use Melody Pond, who may or may not be part Time Lord because she was conceived in the TARDIS, I guess, as a weapon against The Doctor, who she and her Clerics (previously seen guarding River Song in the "The Time of Angels"/"Flesh and Stone" two-parter; this continuity stuff is intense!) view as something akin to a demon. In a switcheroo that I did not see coming, the Melody that Amy was holding was actually made of The Flesh, and Eye-Patch Lady chose the most harrowing moment to make it pop into a pool of goo, which I found pretty distressing, I must admit. Once her plan has gone into effect, she signs off by saying that Melody will end their war with The Doctor, to which The Doctor replies, "What war?"

Again, that's a bit of that obliqueness creeping in, since it merely hints at a wider conflict that we are only vaguely aware of because, heck, even The Doctor doesn't know about it. However, I think we can let it slide because, as we discovered at the end, River Song is the grown up version of Melody Song. She is Amy and Rory's daughter, all grown-up!

I totally called it! Obviously, it's easy for me to say that now that the cat is out of the bag, or the baby is out of the womb, but once the existence of a baby was revealed last week, I started trying to figure out just what the significance of it might be. It seemed that, with all the wibbly-wobbly, timey-wimey stuff that goes on in the show anyway, any baby must exist to grow into someone, and River seemed to the most likely candidate. Again, this suggests that Moffat's vision for the show is somewhat bigger than it might first appear, and that he's got plans for River and her various stages of life and her adventures with The Doctor stretching some ways down the road. (Or even, assuming that she is part Time Lord, her regenerations? When The Doctor was talking to the dying female soldier who met him when she was a girl, I half expected her to regenerate and turn into the River that we now know.)

The episode ends in a place of uncertainty, with The Doctor scattering the surviving members of his gang so that he can head out on his own to save Melody (or, if the title of the next episode is to be believed, to kill Hitler!), simultaneously chastened by his failure and River's speech about what a monster he must be turning into if he can terrify a whole army with just the mention of his name, yet emboldened by the knowledge that he must save Melody because she grows up to be Ms. Song. The next half of the series has a lot of questions to answer, and I can't wait to see what Moffat and his team have to offer.

Speculation: So, assuming that River is part Time Lord, does this mean that she was the young girl we saw regenerating at the start of the series? Obviously, she was, or a version of her was, the little girl in the astronaut suit from the first two episodes, but is she the same girl who died and was reborn in some America alley? I think she was, but I'm not willing to second-guess Steven Moffat on this one.

If she is a Time Lord, could that provide the show with an internally consistent Get Out Of Jail Free card for the moment when The Doctor has used up all of his regenerations? It would save them having to come up with some deus ex machine for why he can keep going. (Though the very notion of regeneration was, itself, something that was made up on the fly to allow the show to keep going with different actors, but it's so ingrained now that they'd have to address it eventually.)

So, the title of the next episode, "Let's Kill Hitler", was a nice, funny WTF moment at the end of a rollercoaster episode, but could it really be that literal? A friend of mine suggested that it could be more figurative, and that what the title actually refers to is the idea of trying to alter a timeline that is meant to be irrevocably fixed by, for example, killing Hitler before he came to power, or saving The Doctor from dying. Alternatively, it could mean that the next episode will be Doctor Who's take on Inglourious Basterds. Here's hoping for Matt Smith versus Christoph Waltz!

Right, that's the last of these recaps until the show returns in August/September/whenever. See you then!
By Edwin Davies
Labels: Doctor Who, film review, television
Newer Post Older Post Home