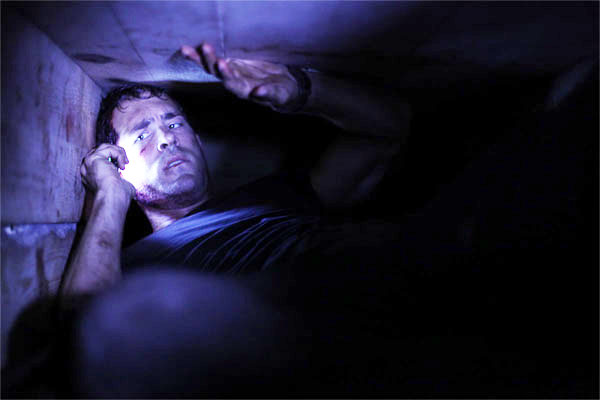 Alfred Hitchcock always relished the challenge posed by making a film where the situation and location restricted the movement of the camera. He most famously explored this in Lifeboat (1944) in which almost the entire film takes place in one boat, as well as Rope (1948) and Rear Window (1954) in which both stories unfold in one apartment, even if in the case of latter film the action takes place outside of the apartment and is observed from that one location. I'm not saying that Rodrigo Cortes' Buried is in the same league as those previously mentioned, but I couldn't help but imagine that Hitchcock would have gotten a kick out of seeing how Cortes tackled the challenge of making a film that not only takes place in a single location, but one that features one actor on-screen for its entire duration and never leaves the confines of the coffin within which that actor is interred.

Paul Conroy (Ryan Reynolds) is a truck driver who moves supplies in Iraq. After his convoy is attacked and he is knocked unconscious, he awakens to find that he has been put in a coffin, buried underground, left with a lighter, a mobile phone and a pencil. As his kidnappers slowly reveal the lengths that he will have to go to in order to escape, Paul has to figure out a way to let the outside world know where he is before he runs out of air, or before the earth itself suffocates him.

At a very early age I developed a fear of being buried alive after hearing a local legend about a man in our village collapsing in the street, being incorrectly diagnosed as dead, then buried in the local ceremony. According to the story, the mistake was only discovered when a man taking an evening walk heard the sound of his fingers clawing at the lid of his coffin, by which point it was too late. Whether or not this story is true - apparently there were records of it in the local paper but I never saw them - is irrelevant. What mattered was that I could all too easily imagine what it would be like to wake up to find myself staring at a piece of wood inches from my face, slowly realising that I had been falsely or malicious interred in the ground with no way out.

Buried is such an effective film because it plays on this fear, which I assume is fairly common, and depicts the practicalities of being stuck in a coffin in the most bleak and claustrophobic way imaginable. Apart from one or two flourishes in which Cortes allows the camera to drift up, making the coffin seem like it is twenty feet long in order to heighten Paul's sense of isolation, the film sticks rigidly to the established geometry of the coffin, allowing the restrictions of the space to generate tension as even the smallest action - such as Paul trying to turn his body around in order to get a bag containing a torch - becomes a Herculean task when he has so little room to manoeuvre.

Ryan Reynolds gives one of his best performances as Paul, not merely because of the gruelling physicality required of the role, but also in his ability to keep ratcheting up Paul's sense of frustration and the ever shifting balance between hope and desperation inside him. Though Reynolds is the only onscreen presence in the film, he spends much of it talking on the film to U.S. officials, representatives of the company he works for and his friends and family, and with each conversation he becomes increasingly more aware of just how hopeless his situation is. There are points in the film in which the crushing inevitability of his situation overwhelm Paul, and it is in these moments that Reynolds is at his most compelling as terror and blind faith battle for supremacy as he tries to work up enough courage to keep trying to save himself.

Buried is a film that will not work for everyone. There are elements of the plot which are difficult to believe - not least of all the idea that he would have enough air to survive the couple of hours that the film takes place over - and the film starts at a point of screeching terror that is relentless, and could become numbing over 97 minutes. However, if you are attuned to its skillful manipulation of basic, primal fears and the thrilling audacity with which Cortes works around his central conceit, then Buried will be a unique and enthralling experience.