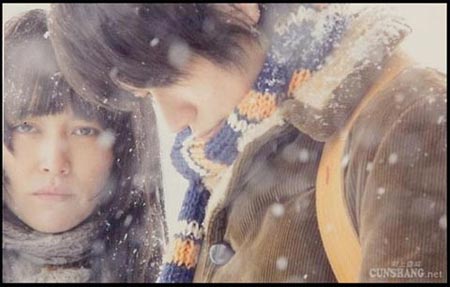 Of the works of Japanese author Haruki Murakami, his 1987 novel Norwegian Wood is the most obvious choice for a cinematic adaptation. Partly based on Murakami's time as a student, it follows Watanabe (Kenichi Matsuyama), a young Literature student whose best friend Kizuki commits suicide. The trauma of this event leads Watanabe to fall in love with Kizuki's emotionally fragile girlfriend Naoko (Rinko Kikuchi) at around the same time as he develops feelings for a fellow student named Midora (Kizo Mizuhara) and has to decide what he wants from these two women.

It's a straightforward narrative free of the postmodern techniques and playful surrealism that characterise most of Murakami's work - the novel does not take place in dreams, there are no talking animals or 100 page sequences of the protagonist being stuck at the bottom of a well - which, along with its period setting (it is set in 1967-8) and relatable romantic elements, make it easily his most accessible work.

Unfortunately, the novel is a very introspective work, a Proustian stream of consciousness in which Watanabe recounts the events of his youth and the political and personal mood of the time. Without resorting to constant use of voiceover to illuminate just what Watanabe is feeling at a given moment - or having Matsuyama constantly announce what the character is feeling - it is hard for the film to give much meaning to scenes that are pivotal in the book. Norwegian Wood struggles, and at least it struggles valiantly, with the same obstacle that has prevented anyone from ever turning The Catcher In The Rye into a film; without that unique voice to carry the story along, you are left with a series of seemingly minor events, interspersed with scenes of a protagonist moodily staring at things.

However, the film should be commended for resisting the easy device of narration (there is some early on in the film but it is used less frequently as the film progresses) and trying instead to tell its story through the performances, visuals and music, all of which are exemplary. As Watanabe, Kenichi Matsuyama is an engaging presence who is occasionally too passive - women fall in love with him and events seem to happen to him, rather than because of anything he actually does - because of the aforementioned problem of trying to take a novel that is very internal and trying to tell the same story externally. Kikuchi and Mizuhara are both great as well, managing to create real, complicated characters from a script which, by its very nature, sidelines them to focus on the impact they have on Watanabe. The film has a somewhat bleak view of human relationships whch it expresses largely through the broken, pained expression on Kikuchi's face, particularly during the intense, awkward and uncomfortable sex scenes that litter the film, and it's her work that lingers most.

The film is also beautifully photographed. Director Anh Hung Tran brings a real lush richness that is haunting, giving an unexpected power to shots of empty landscapes, especially when combined with Jonny Greenwood's score, which is by turns gently melancholic and oppressively foreboding. Tran's palette is quite muted, giving the film a sombreness to match its languid pacing, but there is a heartbreaking beauty to his style that is responsible for most of the film's most moving moments.

I'm not sure how much people who haven't read the book will get out of Norwegian Wood since, for fear of sounding reductive, it is a film in which very little happens at a very slow pace. Most of the story takes place in the silences between the characters, and a lot of what I liked about the performances was that the actors managed to convey what I knew they were feeling because I had read the novel. In trying to stick so close to the source material, it winds up failing to put across what made that material so special. However, there are a lot of individual elements to it which are very striking, and when these elements cohere successfully they create moments of sublime beauty. It's just a shame that those moments are all too rare.