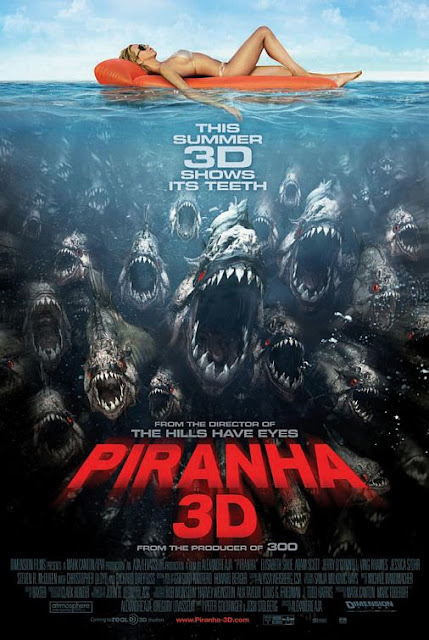 Lest you have any preconceptions otherwise, let me say upfront that Piranha is trash. But at least it's honest trash. It's wanton, lusty and barefaced sleaze that trumpets its trashiness with a shameless abandon that I found endearing. From its very first scene, in which an elderly fisherman is gruesomely ripped to shreds by the piranhas after an earthquake unleashes them, the film sets out to be nothing more or less than an exercise in silly exploitation.

Not content to display a giddy fascination with ridiculously gory violence and death, it also spends a good deal of its time ogling the young, often unclothed bodies of the Spring Break revellers as well as Derrick Jones' (O'Connell) coterie of barely and rarely clothed "actresses", which includes British glamour model Kelly Brook, whose role in the film seems to have been increased so as to take advantage of her ample chest. The film spends so much time leering over their naked flesh that it almost verges on satirical, as if it is mocking the carnal urges of its audience by exposing them to excessive amounts of gratuitous, pointless nudity. It's an idea that is backed up by its depiction of the Spring Break crowd as vacuous, selfish and empty-headed morons straight out of Jersey Shore. Piranha treads a very fine line by both glorifying the bodies yet making us despise the minds inside them, making the moment when the piranhas descend upon the beach in a flurry of teeth and severed tits viscerally satisfying.

The effects in the film are, frankly, ridiculous. Director Alexandre Aja (High Tension, The Hills Have Eyes remake) and his team display a perversely childlike glee in trying to think of ever more darkly funny ways to dispatch the airheaded fleshbags that populate the film. Alongside the frequent scenes in which limbs, eyes and, in one truly eye-popping moment, a penis are rent and torn by gnashing jaws, they also find time for moments such as one in which a young woman is improbably chopped in half by a flailing rope and for a whole host of people to be chopped up by the rotor blade of a boat driven by a particular dickish young man. There is not one hint of subtly to the film, and the violence is so over the top that whilst it is never actually scary, it's also never boring.

It also helps that Aja has assembled a game cast of actors who bring just the right sense of self-awareness to their performances to let us in on the joke. Chief amongst these is Jerry O'Connell, who revels in the opportunity to play the ultimate sleazeball, a pornographer that bears some resemblance to Girls Gone Wild founder Joe Francis who is pure id. O'Connell's is a joyfully awful person who you know has to come to a terrible end, and, as with its many other deaths, Piranha does not disappoint on that front. Elisabeth Shue, Ving Rhames and Christopher Lloyd in "playing Doc Brown up to 11" mode are also a lot of fun, but it's O'Connell who is the most enjoyable.

It's not great art and it won't leave you feeling nourished or fulfilled, but if you're looking for mindless thrills and a gleefully sleazy experience there can be few more fun than Piranha.