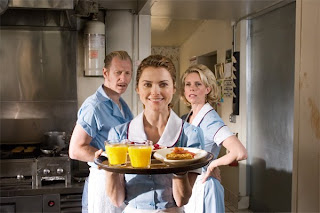 It's a great credit to the warmth, energy and love of life that radiates throughout Waitress, the final film made by writer-director-actress Adrienne Shelley before her murder in 2006, that I didn't find myself thinking about her tragic death all the way through (though one line said in relation to her character, Dawn, did strike me as very sad in retrospect). Keri Russell is radiant as Jenna, a waitress trying to escape her boorish husband (Jeremy Sisto), first by entering a pie-baking contest, which is permanently derailed when she discovers that she is pregnant, then through her relationship with her doctor (Nathan Fillion). At the same time, she talks to her friends at work - played by Cheryl Hines and Shelley - about their various relationships and problems and they all try to muddle through as best they can.

There were times when it threatened to become an Indie-by-numbers quirk fest, most of which revolved around the repeated motif of Jenna baking pies to reflect her mood at the time. She imagines creating new recipes for pies with names like I Don't Want Earl's Baby Pie and Fallin' In Love Chocolate Mousse Pie which are then depicted in sped-up dream sequences. It's a funny little conceit which starts out quaint, then a bit grating, then sweet again as the film goes on. But Shelley always snaps the film back by focusing on the small town desperation that Jenna is trying to escape through those flights of fancy. It's almost as if she has the film on a very short leash, and every so often she'll let it wander to add flavour to the story, but she forcefully jerks it back when the quirks and embellishments threaten to derail the story.

It also helped that Keri Russell is a terrific actress who can play Jenna as both the hopeful optimist who thinks that salvation is just a couple of dollars away, and as the steely-eyed depressive who views her unborn child as an albatross around her neck. We firmly believe that she both sees the contest as her one help, yet also that she is well aware that her baby could keep her tied to her awful husband for all of her life if she can't get out now. Played by a lesser actress, the two sides of her character could have felt jarringly incongruous, but she shows us that they come from the same place - the desire to be free.

She's ably supported by a strong cast, with Nathan Fillion being particularly charming and endearingly clumsy as the doctor who is so smitten with Jenna that he becomes awkward and gawky around her. Fillion also makes this self-consciousness feel right for his character, something which could have felt really false considering how good looking Fillion is. It reminded me of the story of how Robert Redford lost the lead in The Graduate to Dustin Hoffman because Mike Nichols asked Redford if he had ever struck out with a girl and he replied that he didn't understand what he meant. Fillion embodies both an easy charm that comes with being naturally handsome and an almost adolescent awkwardness when faced with a woman he has a crush on. He's no Robert Redford, and for once that's a good thing.

One of the stranger pieces of casting in the film is sitcom legend Andy Griffith as a grouchy patron of the shop that Jenna works in. At times the film seems to be mocking the sort of humble small town values that he spend much of his career quietly celebrating, and I wondered why he would want to appear in a film like that. Then I realised that whilst the tone of the film is perhaps a little patronising in that respect, it is at heart about the way in which we save ourselves through our friendships, and that is very much in keeping with the tone of Griffith's work. He also probably really relished the chance to be a real (fake) bastard for once.

Really funny, moving and real, even in its moments of fairytale realisation (such as the classical music and rapidly spinning camera that are employed whenever Russell and Fillion kiss). It's not a perfect film, but it's indicative of a strong, distinct voice that was beginning to flourish, and was silenced too soon.
By Edwin Davies
Labels: film review
Newer Post Older Post Home