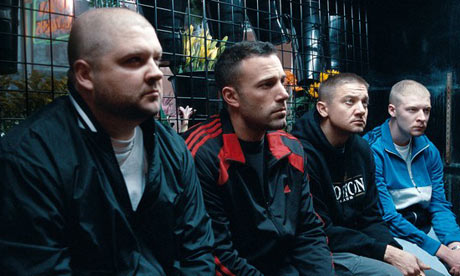 Doug MacRay (Ben Affleck) is part of a crew of bank robbers who operate out of the Charlestown area of Boston, a section of the city which, according to the (possibly bullshit) text that opens the film, produces more bank robbers than any other place in the world. During the course of their latest job, his impulsive and borderline sociopathic friend James (Jeremy Renner) takes the bank manager (Rebecca Hall) hostage. After letting her go, James has second thoughts, and wonders if she might have seen something and if they will have to kill her to tie off all the loose ends. Doug doesn't want anyone to get hurt, so he befriends her in order to find out what she knows, but quickly finds himself falling for her. Meanwhile, an cartoon pilot FBI agent (Jon Hamm) investigates the robbery and tries to find out who was responsible.
Largely due to its origins as a fairly average Chuck Hogan crime novel named Prince of Thieves, there is little in The Town that anyone who has seen any number of crime films - or anyone who has just seen Heat - won't have seen before. Cliches abound. Doug is the sort of noble criminal who, despite being involved in crimes which have violence implicit to them, never wants anyone to get hurt and has a nobility to him that just does not exist. James is the sort of psycho that no criminal with even an ounce of self-presevation in their bodies would ever work with, let alone keep working with, because he is obviously going to screw everything up. (Joe Pesci in Goodfellas and Casino and Michael Madsen in Reservoir Dogs are the epitome of this trope.) The one woman that Doug loves is the one woman who can never know the truth about who he is and what he does, so he spends much of the film lying and hiding her from his friends, though you know that she will find out eventually.

However, it distinguishes itself with a stellar cast, which also features Pete Postlethwaite, Chris Cooper and Titus Welliver in supporting roles, all of whom add levels of grace, dignity and class to their often threadbare characters, and an offbeat sense of humour that you generally don't find in fairly conventional crrime films. Affleck, who also directed and co-wrote the film, is a charming and engaging lead who has an immense chemistry with Hall that adds substance to a relationship that could easily have felt like nothing more than a plot device with lesser actors or director involved.

Equal to, if not greater than, Affleck's chemistry with Hall is Affleck's chemistry with Renner. The hurdle that almost all heist films face is the contradiction that exists between the narrative need for a sociopath to create tension within the crew and eventually derail the whole operation, and the fact that if the robbers are as professional as the film claims they wouldn't work with him. The Town gives due time to developing the lifelong friendship between Doug and James that keeps them working together, even though Doug understands all too well that James is going off the rails and is going to land them all in jail or in a morgue. The two actors give the friendship a sense of history through both big and small gestures, be they the way they greet each other, or the way that James, when asked by Doug if he could help him "hurt somebody," asks no questions besides, "Whose car are we taking?" Renner brings a boiling intensity to James that makes him a really magnetic presence, whether he's shooting up a cop car or shooting the shit with this friends, and makes him more interesting than the stock character that he is.

There's no single sequence in the film as indelible as the barroom confrontation in Affleck's first feature, Gone Baby Gone, though a chase scene through the back streets of Boston is pretty wonderful, but as a whole it's a much stronger film, one that is tense, sleek and charming. Or at least in so much as a film that has someone get their head bashed in with a rifle in the opening five minutes can be charming.
By Edwin Davies
Labels: 2010, Ben Affleck, film, film review
Newer Post Older Post Home