House of the Devil 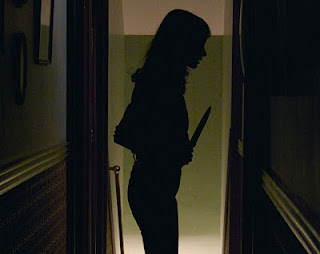 In this delightfully fun and creepy homage to horror films of the 70s and 80s, Sam, a college sophomore (Jocelin Donahue) in need of money to pay rent on her new apartment, agrees to take a job babysitting from a mysterious man (Tom Noonan). Upon arriving at the house, she discovers that she won't be babysitting a child, she'll be babysitting Noonan's mother whilst Noonan and his wife (Mary Woronov) are out observing the eclipse that is happening that night. Despite her reservations and the fact that she is clearly entering into a situation which you would only find in a horror film, she takes the job. Bad move.

Ti West, director and screenwriter of The House of The Devil, has clearly watched a lot of horror films since he gets the look and feel down just right. The period trappings are all quite nicely observed, but the techniques he uses - specifically slow zooms and a distant, voyeuristic camera style - are perfect. The music by Jeff Grace is also pretty evocative of a certain kind of old horror film, reliant as it is on simple, creepy motifs that build as the film progresses.

It also helps that Noonan is effortlessly weird and creepy-looking (no offense to the man, who I think is a really great presence in everything he's in, but he is an odd looking fella), and even the scene in which he offers Sam the job, a scene that requires him to just be friendly, is really uneasy and strange thanks to Noonan's soft voice and gangly frame. He makes Sam, and us, feel off-kilter before anything remotely strange has happened. This at least partially contributes to the actual explanation of what is going on - which is pulpy and sensationalist as only the best cheesy horrors can be - ends up being a bit disappointing when compared to the build-up, but still a lot of fun to see unfold.

It would all just be an academic exercise if the film only borrowed the mannerisms of the films it aspires to, but it also borrows their menace. It's a very slowly paced film - there's one big jolt in the first half an hour, then not much really happens until the final twenty minutes - but West uses the time between those two events to build a creeping uneasiness that will be familiar to everyone who has ever had to spent the night in a strange house. Every sound is amplified, every room holds hidden horrors, and every minor incident is earth-shattering.

Credit for this should be divided equally between West, who sustains this sense of dread right up until the film turns into a blood and viscera flecked nightmare, and Donahue, who is completely convincing as a woman terrified for reasons she can't quite put her finger on but who is trying to stay calm and rationalise it all away. I was pleasantly surprised by how well the switch between the two different kinds of film worked, but that may be just because the film does little to hide what it is actually about (the clue is in the name) so a sudden switch wouldn't be as jarring as, say, a T-Rex showing up halfway through.

It's not a modern day classic or anything, but it's a fun, creepy film that I really enjoyed.

It also features one of the most disgustingly gooey headshots I've ever seen in a film. Which is nice if that's what you're in to.
By Edwin Davies
Labels: film review
Newer Post Older Post Home