Ed: I've been compiling my Top 10 list of the year and I stumbled across a bunch of reviews that I had written elsewhere but never posted here. In the interests of completeness (and a desire to reach that magic 100 posts mark for a second year running) I'm going to be posting the reviews here over the next couple of days.


When they said it was a "lakeside property" this was not what I had in mind. 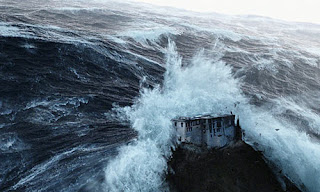 So, the sun is creating neutrinos which are causing the Earth to boil (or something) and hunky scientist Chiwetel Ejiofor tells Secretary of State Oliver Platt that pretty soon the Earth's crust is going to start melting and they should probably, I dunno, do something about that shit. He tells President Danny Glover, and they begin to prepare for the end of the world. Meanwhile, writer/forgetful dad John Cusack stumbles upon the conspiracy to save the best and brightest, and tries to get his family onto the giant arcs that have secretly been built in the Himalayas.

I'm all for spectacle, and I quite like some of Roland Emmerich's films - Independence Day was on the other day and I found myself getting drawn into it as I have the dozens of times I've seen it before - but this is just fucking terrible. The central concept is just incredibly dull, as far as a disaster movie goes, because there's no tension about when a disaster is going to strike; you know that it's only a matter of minutes before the Earth is going to fall away behind John Cusack and his boring broken family, and the film never takes the time to let the characters, or us, breathe. It's all crescendo and no diminuendo. Without that breathing space, it's hard to develop the characters and give us a reason to care about them not being crushed by aircraft carriers or splattered on the side of Mount Everest.

It's also very fucking long. I know that films in general have gotten longer in recent years, but there is no good reason to make a silly disaster movie that is two and a half hours long. What's worse is that you can tell where the bloat could have been cut. Give Chiwetel Ejiofor's dad one scene instead of three; ten minutes cut from the running time. Get rid of those Tibetan monks who are only there to be cryptic then die; five minutes cut. Have the family make ONE daring escape in a plane whilst a city crumbles around them, rather than two; twenty minutes gone.

I will say that it delivers on the spectacle. Over the years Roland Emmerich has become very good at destroying the world, and he has a rare ability amongst modern action movie directors to actually make it clear what is happening. He knows how to create space and can stage the action within that space in a way which is coherent and exciting, but he uses the same tricks far too often to keep the film remotely interesting past the first hour. Then you get into the last hour and a half, when the film turns into Titanic, and I just stopped caring.

Probably what's most galling about it is that it has nothing, I mean NOTHING, to do with the Mayan calendar whatsoever. It's a generic disaster movie that happens to take place in 2012, and it's clear that they only set it in that year to jump on the Mayan bandwagon and stand a better chance of earning a profit (which, cynical as it is, worked gangbusters).

To quote my friend Michaela, it is a film which "gets stupider by the second" and "is complete fucking wank, isn't it?" Yes, yes it is.
By Edwin Davies
Labels: film review
Newer Post Older Post Home