Why revealing the truth about I'm Still Here is a huge mistake, and why I'll still see it anyway 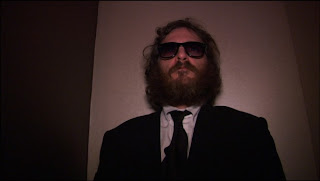 I've been...'excited' isn't exactly the right word, but I've certainly been enthusiastically intrigued by I'm Still Here, the Casey Affleck-directed film about his brother-in-law, the actor Joaquin Phoenix, which opened in select theatres last week. Specifically, the film is about his lost year, in which he gave up acting in order to pursue a rap career and pursued a path of self-annihilation and he did a boatload of drugs, and generally appeared to all the world as if he was having a massive breakdown.

Except, of course, he wasn't, since Casey Affleck has now confirmed that the whole thing was a set-up, and that Phoenix's disastrous appearance on the David Letterman show, as well as all the other crazy shit that he did - including having someone defecate on his chest on camera - was staged.

When I first heard about Affleck's announcement, I was disappointed. Not because I thought that it was real, far from it. I know that a lot of intelligent critics - including the estimable Roger Ebert - bought into the film, and I can understand why they would want to read the film as an actual documentary, but as far as I was concerned you'd have to be Helen Keller not to see that it was all a big hoax. Almost as soon as word got out that Phoenix was embarking on a rap career, I thought that it sounded so outlandish it couldn't be taken at face value, and every subsequent development just confirmed this in my mind; the announcement of Affleck's involvement, reports of Phoenix's outlandish behaviour, leaked tracks from Phoenix's proposed debut album, they all struck me as false.

I was disappointed that I had been unable to see the film before the announcement was made, since I now didn't have the chance to make up my own mind about whether it was a hoax or not, but I was more disappointed that the announcement came at all. For me, the chief reason to see the film would be to be part of the conversation about whether or not the film was real. From my own perspective, as sure as I was that the film was a fake, I could never be entirely certain because, hey, it's Hollywood, and I'm sure that stranger things happen there everyday than anything that Phoenix and Affleck could conjure up.

The best point of comparison would be how reactions to the film Exit Through The Gift Shop quickly became about whether it was a film about a real man or just an elaborate joke on Banksy's part. The film was hugely entertaining as a constantly shifting story, but the elusive nature of its truth raised a lot of interesting questions, many of which I'm still thinking about six months after I saw it. I'm Still Here developed a similar mystery around its truthfulness, and Affleck's announcement has destroyed the ambiguity that was the film's biggest selling point.

But despite this sudden, if not surprising, revelation, I'm still very interested in seeing the film, even if, since it's not showing anywhere near me, that might take a while.

Why am I still intent on seeking out this film now that the mystique has evaporated?

It's true that Casey Affleck's exposure of the film as a fraud fundamentally changes the nature of the film, transforming it in an instant from a puzzling curiosity to an escapade more in keeping with the work of Sacha Baron Cohen than Errol Morris, but that doesn't destroy the fact that it documents an Andy Kaufman-esque ruse carried out - admittedly unsuccessfully - on a massive scale. (Though Kaufman would have had the integrity not to admit that it was a ruse, the principle remains the same.)

Though the events in the film may be staged and controlled, that doesn't mean that they didn't happen; a two-time Academy Award nominated actor, rightly acclaimed as one of the most promising actors of his generation, really did take a year out of his life, in the process causing possibly irreparable damage to his reputation and career, all for a joke. That fascinates me. It suggests a level of commitment to a character and a conceit that transcends the boundaries of mockumentary to become a piece of performance art, in which Joaquin Phoenix, actor, spends an entire year of his life playing the character of Joaquin Phoenix, burnt out celebrity pursuing a quixotic dream of becoming a rapper. Let's see Daniel Day-Lewis top that for method acting. It turns his 'meltdown' into a bold experiment in acting.

There's also an argument to be made that Phoenix, in engaging in an act of fiction, could offer us a view of something truthful. Perhaps he really was fed up with his career as an actor and the insane, vacuous world of parties, paparazzi and press junkets that it entailed, and he thought that the only way to really break out from it would be to stage a farce on a massive scale. Or maybe, to paraphrase Morrissey, he started a joke that he couldn't finish, and now he's not to sure.