You finished reading that book, man? It's real trippy. 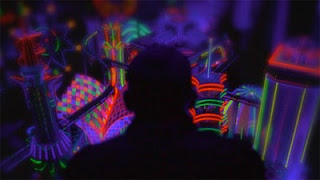 The films of French director Gaspar Noé inhabit a land that exists between the arthouse and the grindhouse, and are often as provactively sleazy as they are sleazily provocative. His frequently violent subject matter, combined with a combative style that almost dares you to like his films and a positively pornographic sensibility regarding the use of explicit, often unsimulated sex has given him a reputation as the arch-delinquent of world cinema that sometimes obscures the emotional resonance that his best work - such as Irreversible, which contains both a scene of gutwrenching brutality in its first five minutes and a scene of heartbreaking tenderness in its last - has.

His latest film, Enter The Void, finds Noé at both his most unapologetically sleazy - there are long sequences in the film set in a strip club which consist solely of half-naked women writhing around for no discernible reason other than to be titillation - and his most ambitious. Using the same disorientating, constantly swooping camera style that famously caused many people to leave the Cannes screening of Irreversible because they became nauseous from the constant movement - he puts us in the mind of Oscar (Nathaniel Brown), a small-time drug dealer living in Tokyo. Early on in the film, Oscar is shot and killed in a drug bust gone awry, and the rest of the film follows his consciousness as it follows his sister Linda (Paz de la Huerta) and best friend Alex (Cyril Roy) as they come to terms with Oscar's death, as well as showing us the traumas and mistakes that led Oscar to die curled up around a toilet bowl in a dank club with bullet hole through his chest. The film takes us through the last thoughts of a dying mind, asking us to consider just what, if anything, a life is worth, particularly one as incidental as Oscar's.

The plot of Enter The Void is unremarkable, to say the least, and the performers don't really do much to enliven it. Watching Oscar and Victor walk around Tokyo talking is, at times, pretty painful. Brown and Roy are both non-actors that Noé found for the film, and central paradox of casting non-actors is that the director wants them to seem natural, yet by putting them in front of camera they instantly feel uncomfortable and act unnatural. Brown and Roy get better as the film goes along, but there are times when their performances feel very clunky.

This is most notable during the scenes in which the two discuss The Tibetan Book of the Dead, which Oscar is reading at the start of the film and which provides the structure for the film's depiction of the afterlife. This would be fine, except Noé has the actors go into excruciating detail about just how that particular vision of the afterlife works, and then shows them discussing it again when Oscar dies and relives the same conversation as a disembodied spirit. It's admirable of Noé to want to establish for the audience just how his film will work since many people watching the film (including myself) probably won't be all that familiar with the particulars of the Tibetan Book of the Dead, but he uses all the subtlety of a sledgehammer to do so.

There are exceptions to the rule, though. As Oscar travels back in time and revisits memories from his childhood, we get to see the tragic death of his parents, and the way in which this formed a bond between him and Linda that he seems intent to honour even in death. The scenes between the young Oscar and Linda are filled with an intimacy and raw emotion that is absent from the rest of the film. The little girl playing young Linda is so good she even adds to depth to de la Huerta's performance, making you wonder if her glassy stare and stilted delivery are because she's a terrible actress, or because they represent the defenses that Linda has created to protect herself from the world.

So, the plot is pretty thin and the performances aren't great, so why should you see this film? Because Noé uses this slim story to explore a visual style of storytelling that pushes the very boundaries of what cinema can accomplish. In that respect, it's the psychedelica freakout version of Avatar (it could also lose a good 45 minutes, also like Avatar). For the duration of the film, you really feel as if you are inside Oscar's head and that you are travelling with him on this impossible journey to the next life. It's the closest anyone has come to creating that door that allowed John Cusack to spend fifteen minutes in John Malkovich's head.

Noé's use of sound, his ever moving, disorientating camerawork and expressive use of colour is really breathtaking, and perfectly captures Oscar's sense of detachment and deterioration as he hurtles towards the next stage of existence. His camera glides seamlessly through rooms, walls, cityscapes and people, showing us the past, present and future of Oscar and everyone he knows as they stumble through the Tokyo night, which Noé shoots like a neon-saturated nightmare that only grows more oppressive and intense as the film progresses.

For all its flaws, Enter The Void is a true work of art. The film makes several references to 2001: A Space Odyssey - which Noé frequently cites as the film that made him want to become a film-maker - and Noé is clearly trying to achieve using modern technology what Stanley Kubrick did in 1968. He wants to create an experience that is beyond anything that has been achieved before and, for all my misgivings, he does; Gaspar Noé has created a film that is a truly sensory experience, rather than a narrative one, and that pushes the medium to its limits. It's ridiculous and serious, it's exciting and boring, it's disgusting and beautiful. It's a real trip.
By Edwin Davies
Labels: film review
Newer Post Older Post Home