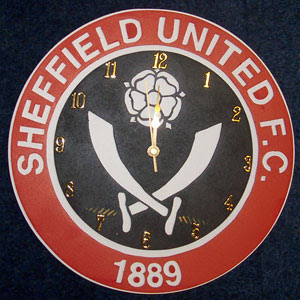 I hope you're sitting down, because what I am about to tell you is so shocking that it could very well knock you flat on your arse if you're standing up when you read it. I am not a football fan. I don't even care for it in films - I haven't even got the state-mandated copies of Escape To Victory and the first two films in the Goal! trilogy (I hear that the third film really betrays the complex characters and world of its predecessors) that every red-blooded British male is meant to have to prove their value to society. I watch it on television occasionally, and there are times such as the World Cup when I approach being interested in it, but for the most part football is not something I concern myself with.

As such, I very rarely go to watch football matches live. In fact, the last time I went to a league match was in 1999, when I went to see Aston Villa play Leicester. I think. I can't be entirely certain because, even then, I didn't really care that much about the game and the teams, but I very clearly remember the feeling I had being in a stadium surrounded by thousands of people who were all there for largely the same purpose. I've since combined that love of communal experiences with my love of music, transferring any interest I might have had in football into a desire to go to as many gigs and music festivals as I can, and haven't been to watch a match since (though, during my time as a professional games tester, I played plenty of matches during our breaks as a means of offsetting the prodigious weight gain that playing computer games and eating junk food for twelve and a half hours a day entails) but my memory of that game remains very strong.

So when my friend Michaela offered me a free ticket to see Sheffield United play Scunthorpe, I jumped at the chance. I'd be a fool to pass up the chance to watch two middle-profile teams play a game with little to nothing riding on it, and in which I had no stock or even passing interest. It'd been such a long time since I last went to a match, what would it be like to watch another?

Well, from the off, it became apparent that I had no fucking clue how a football match at even a moderately large stadium like Bramall Lane works. After going through the turnstile, I got lost walking through the embarrassingly simple stairwells and had to ask four different stewards for directions before I found my stand. It was a good job that the stadium was only two-thirds full; it's unimaginable how much difficulty I would have had finding my actually seat, instead of being able to just grab the nearest available space.

Later, I became genuinely scared when an announcer declared that all police and stewards should move to "Phase 5." What did it mean? Was Phase 5 the lowest warning level, the highest level, or some intermediary? How high did the scale go? Did it mean that someone had phoned in a bomb threat, or that someone had lost a contact lens and the police and stewards had to walk really carefully to avoid stepping on it? Within minutes a second announcement declared that everything was back to normal, but with no clear sense of what, if anything, had happened, I felt disorientated and bewildered.

As if to illustrate my disorientation, I didn't realise the game had started until it had been going for a full three minutes. For some reason I got it into my head that the teams were involved in some sort of pre-game kickabout. I'd like to think that this was due to the lacklustre efforts of the players, which in turn lead me to think that the game hadn't really started, but I think it's more likely that years of watching football solely on television has conditioned me to expect a certain degree of ceremony to announce the start of a match. Whether it's the grandeur of the national anthem being sung by the players, or just commentators saying that the match has begun, I felt like something had to happen to mark the point at which the game started.

To make matters worse, actually sitting in the stands made me feel very self-conscious and nervous. Whenever a cheer went up, I felt so conflicted; should I cheer as well, or keep quiet? What was that cheer for? Was it an appreciative cheer, or an example of en masse sarcasm that anyone who had even a cursory understanding of football etiquette would recognise instantly? Rather than risk embarrassment - or a punch in the face - I sat on my hands and tried to give off an appearance of non-partisan, almost zen-like concentration. I didn't have time for such trivialities as clapping, cheering or signs of enthusiasm; I was into the game.

In the 33rd minute, Scunthorpe scored a goal. (Their first of four.) This was important for two reasons. One: as someone who lives in Sheffield, I felt I had to at least notionally support United, so Scunthorpe being in the lead was, in theory, a bad thing. Two: Scunthorpe scoring meant that I finally knew which team was which.

It was at this point that I felt a sudden pang of guilt; here I was, someone with absolutely no vested interest in either team, taking up a seat that could have been occupied by a genuine Sheffield United fan. (In fact, Michaela informed me that our friend Martin, who supports United, would have taken the ticket if I hadn't put my name down first. Considering United's woeful performance, I think he's probably glad he didn't in the end.) This guilt was short lived, though, and it died as soon as I looked around and saw that, in order for me to be taking a seat from a genuine fan, about five thousand other genuine fans would have had to show up to fill the ever so conspicuous empty seats scattered throughout the stadium.

I keenly felt the influence of only watching televised matches for so long when I found myself completely unable to figure out what was going on on the pitch. Not in the sense that I didn't understand the rules - I know a lot about football for someone who knows nothing about football - but because I was initially unable to focus my attention on the game itself. I realised that watching a match live - truly live - is a much more active experience than watching it at home, where directors, editors and commentators shape the footage of the players into something that appears to be much more dynamic and compelling through their use of close-ups, replays and analysis. As a viewer at home, it requires very little effort to keep up with what is happening because you're being guided through the action. At a match, there is no safety net of ready made interpretation to keep you informed, you have to actually pay attention.

On the one hand, this made the game go by faster than many of the ones I've watched on television because I had to work so hard to keep up. On the other, without the sense of intimacy and immediacy that television can bring to the experience, not to mention that I didn't know who any of the players were and had no firm grasp of the stakes of the game, I found watching the match really unengaging; it was like watching someone else play Pro Evo, but outside and in the cold.

Apart from the match itself, which was pretty terrible for all concerned - United played abysmally, and reached their nadir when the goalkeeper left the goal to run halfway up the pitch, only for a Scunthorpe player to get hold of the ball and kick it into an embarrassingly easy open goal - the atmosphere was surprisingly muted. One of my fellow patrons enlivened things by bellowing about how United would have won if they had bought more players, which in turn led another fan to more reasonably bellow that the club had no money to buy players, but apart from that everyone just seemed resigned to United's drubbing. Even the players seemed to meekly accept their fate, collectively deciding that if they were going to get fucked they might as well get fucked hard.

After the match ended with Sheffield United losing 4-0, the fans filed desultorily out of the stadium, too downbeat to pick a fight. I even considered shouting "Come on you Leeds!" to see if the mere invocation of the city's historic enemy would start a ruckus, but then I realised that I didn't care about the Leeds-Sheffield rivalry, and I certainly didn't care enough about it to end up in A & E or a cell. Though as we walked past a television screen, Michaela told me that Leeds, who had also been playing that night, had lost 5-2 to Barnsley, so maybe if the news had spread quickly enough a cry of "Come on you Leeds!" could have been just the sarcastic put-down to raise the moribund spirits of the United crowd. Sadly, my chance to be a folk hero immortalised in the songs and hearts of the people of Sheffield (at least the half that supports Sheffield United and not Sheffield Wednesday) had passed.

As we walked away from Bramall Lane, I half-jokingly said to Michaela that since that was the first match I'd attended in eleven years, it'd be at least another eleven before I went to another. She chided me for not appreciating the communal experience of actually being there and being so close to the players.

Personally, I found "being there" to be much more distancing than watching them on television at home or in a pub with friends. I think I've been conditioned - through my consumption of television coverage of football as well as all the other recorded media I devour on a near-daily basis - to respond more viscerally to the manipulated images on television than the unfiltered ones I witnessed with my own eyes. It's not that I didn't find the experience interesting or engaging - though I would have found it moreso if the match had actually been fun to watch - just that I have become accustomed to the artificiality of the game, a fractured vision in which the action can be viewed from any angle and can give a clarity of vision that I'd need a jetpac to approximate in real life. Watching from the stands is fine, but when television offers you the chance to be on the pitch, even if it's just an illusion, well that's much more interesting to me.
By Edwin Davies
Newer Post Older Post Home