An exercise in easy nostalgia and tough lessons. 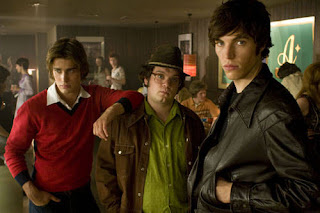 Few writers can lay claim to as meteoric a rise and as seismic an impact as Ricky Gervais and Stephen Merchant, who over the last decade have built a comedy empire for themselves based around their two critically adored television shows, (I, for one, would argue that The Office is probably the most influential sitcom of the last ten years) podcasts, (their XFM shows were amongst the first globally successful podcasts), and their prolific work as actors outside of the Gervais/Merchant umbrella.

Their ubiquity means that Cemetery Junction, their first feature film as writer-directors, comes with a lot of expectations. This is a shame, since anyone going in expecting a gutbusting comedy full of the exquisitely awkward comedy that Gervais and Merchant are renowned for will come away disappointed. Not because it's unfunny - there are plenty of big laughs - but because Cemetery Junction isn't a comedy, and is easily their most accessible and conservative work to date.

Set in 1973, the film centres around three young men living in the Cemetery Junction area of Reading in Berkshire. Freddie (Christian Cooke) is the son of a factory worker (Gervais) who wants to escape his working class background and has got a job as a life insurance salesman working for the overly-serious Mr. Kendrick (Ralph Fiennes), whose daughter (Felicity Jones) Freddie falls in love with, but who is engaged to a rival salesman (Matthew Goode). Bruce (Tom Hughes) works in the factory with Freddie's dad, and despite constantly claiming that he's going to leave and start a new life somewhere else, he seems content to stay, get drunk, get into fights and get put into the town gaol for his trouble. Completing the trio is Snork (Jack Doolan), who doesn't have the same way with women that Freddie and Bruce do, and doesn't know how to stop saying stupid things.

Despite being made in 2010 and set in 1973, Cemetery Junction has its roots firmly in the 50s and 60s, and hearkens back to the Angry Young Man movement that produced classic films like Billy Liar and Saturday Night, Sunday Morning, both are clear influences on the character of Bruce, as indeed is James Dean in Rebel Without A Cause, which is acknowledged both implicitly (he wears Dean's iconic outfit of a red jacket, white t-shirt and jeans at one point) and explicitly (one character refers to him as James Dean).

It's much more overtly dramatic than anything Gervais and Merchant have attempted before, and beneath the quips and banter is the same sense of bittersweet disappointment that makes the films it is indebted to so vital (the spectre of Billy Liar looms large over Cemetery Junction's third act) as well as the best of Gervais and Merchant's own work. The film moves with the relentless energy of a glam rock track, but there's a poignant sadness running through it that is best exemplified by the character of Mrs. Kendrick (played with a broken, beaten melancholy by Emily Watson) who spends much of the film being dominated by her husband and, in a crucial moment, laments that she could have lived such a different, happier life if she hadn't settled for what was easy. I don't think that Gervais and Merchant handle the purely dramatic side of the film as well as they do the comedic - like Gervais' hero Woody Allen, their best work integrates the two, rather than separating them - but I felt for these characters more than I expected to, and I was really rooting for them to escape their everyday drudgery.

In making the move from television to film, Gervais and Merchant don't push themselves visually, instead relying on an unobtrusive and benignly pretty style that is functional but little else. But a willingness to get out of the way of the story shouldn't be mistaken for a lack of imagination; when you've got a cast this good and a script this sharp, unnecessary flair can be distracting. Gervais and Merchant's debut won't have the same impact as their other work has, but it's a well-made, well-meaning film that aims to do nothing more than entertain and maybe move you. To expect it to do any more is to expect it to be a different film.
By Edwin Davies
Labels: film review
Newer Post Older Post Home