Humanity and horror amongst the snowy Ozarks 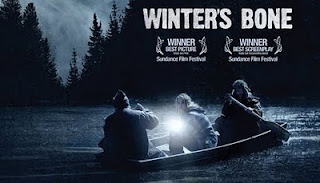 Whilst watching Winter's Bone, Debra Gronik's blistering adaptation of the novel by Daniel Woodrell, I kept comparing it to David Lynch's Blue Velvet. Not because they are similar in style or tone - there couldn't be a greater difference between the digital, handheld realism of Winter's Bone and Lynch's Hitchcockian composition - but because both films display an intuitive understanding of how their respective communities work, and the ways in which cruelty and kindness, beauty and brutality, co-exist and can sometimes be embodied in the same person.

Both films are also, to an extent, about the way in which a young innocent is changed and brutalised by their descent into an underworld that they don't understand. Ree Dolly (Jennifer Lawrence) is less jejune than Jeffrey Beaumont, though, as we discover very early on. At just 17, Ree is already responsible for the well-being of her family, who live in a rickety cabin in a remote part of the Ozark mountains of Missouri. Her father is a crystal meth cook who spends much of his time in prison, her mother is sick, and Ree's younger sister and brother are too young to care for themselves. With no money, they rely largely on the kindness of their neighbours to get by, even having to give up their horse because they can't afford to feed her.

If Ree's existence wasn't hardscrabble enough, the story really starts to turn the screws when she learns that her father has gone missing after putting the family house up as part of his bail bond. If he doesn't make his court date, the house will be repossessed and Ree and her family will be kicked out. Since the police don't have any leads, and don't seem to care that much either way, Ree starts asking questions of the reprobates and drug dealers that comprise her extended family, hoping that they will know where her father has gone. But her family don't like talking because talking only creates witnesses, and witnesses can easily disappear under the Ozark snow.

I've already mentioned that part of Ree's journey through the film is the way in which she is brutalised by what she encounters in her hunt for her father, but there isn't actually that much on-screen violence for her to be brutalised by. Early on, her uncle Teardrop (played with a wiry, disturbed energy by the incomparable John Hawkes) tries to dissuade Ree from investigating further by grabbing her by the neck and wrenching her head back, and there are sporadic outbursts of violence here and there, but for the most part it is the threat of violence that gives the film a palpable, inescapable sense of dread, and makes the eventual outbursts all the more devastating.

One of the most striking achievements of the film is the way in which it captures the essence of this mountain community. We know long before we are actually told that these people are not the sort to let someone go around asking questions, even if that person is their own kin. It's very much in keeping with the harsh world that Gronik and her co-screenwriter Anne Rosselini create that they would care more about keeping their secrets than preventing one of their own from being put out into the streets.

Gronik gives every one of Ree's encounters with her family members a nervous, disquieting energy that makes violence and death seem inevitable and imminent. That many of these moments don't result in violence doesn't diminish the fear, though, but defer it to the next confrontation, when the screws will get even tighter and possibility of violence will seem even more inevitable; one scene, involving Teardrop, a shady local sheriff (Garret Dillahunt) and some (metaphorically and literally) loaded guns is the most harrowing and intense scene I've seen since Anton Chigurh asked a shopkeeper to call it.

It's the emotional violence that lingers longer than any of the physical, and a large part of that can be attributed to Jennifer Lawrence's central performance as Ree. She manages a mixture of vulnerability and steel-eyed conviction that makes us fear for her safety even as we know that she is the only one who has the courage to do what needs to be done. From the first second to the last we believe that she will do anything, no matter how horrific, to protect her family.

Lawrence gives us a glimpse into Ree's relationship with her father without telling us too much. She does not love the man for leaving his family behind to starve, but she also shows a curious pride when she refuses to believe Teardrop's story that he died in a meth lab explosion; her daddy was too good a cook to die so carelessly. There's a complexity to Ree that a lesser performance could have lost. I don't know if Lawrence's performance is flashy enough to get an Oscar nomination come January, but her name needs to be in the conversation because she takes what is already a taut, tight and terrifying thriller and elevates it to something great.
By Edwin Davies
Labels: film review
Newer Post Older Post Home