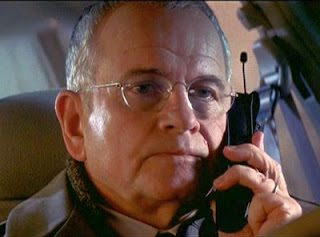 The Sweet Hereafter is a film which revolves around a fatal bus crash. It does so from both a storytelling perspective, since it is about how a town reacts the ensuing tragedy, and from a narrative perspective, since writer-director Atom Egoyan uses a nonlinear structure to tell the story. Chronologically, the film starts after the bus crash, but jumps around in time so that the crash happens at almost exactly the halfway point of the film and acts as the axis upon which the entire film spins.

By the time that we actually see the crash, we're already well aware of what happened thanks to the efforts of Mitchell Stevens (Ian Holm) a lawyer who comes to the town in British Columbia hoping to convince the parents of the children who were injured or killed in the crash to file a lawsuit against the company who made the bus, in the hope that it will give them some peace of mind, as well as some recompense.

So, already we have two timelines; one detailing Stevens' visits to the parents, the other consisting of flashbacks detailing what happening on the morning of the crash. Egoyan resists the urge to make the flashbacks seem overly portentous, with the one exception of a mentally handicapped boy being afraid to get on the bus, instead allowing them to play out like a normal, average day. He understands that these things come out of the blue, and to overload them with foreshadowing would be to lessen the impact of the actual crash, and because the structure of the film means that we are well aware of what is going to happen; the kids on the bus are happy and unaware, we're waiting for the other shoe to drop.

Egoyan milks the dramatic irony of this for all it's worth, and even makes the actual crash, when it happens, a shocking bolt from the blue. He shoots it with a eerie, detached eye that suggests that even the camera has been traumatised by what it has seen. One second it's on the road, the next it isn't, and we watch from a distance as the tragedy we knew was coming happens and we can do nothing to stop it.

There's a third timeline in play, too. Throughout the film, we see Stevens' on a flight to Los Angeles to meet his daughter, Zoe (Caerthan Banks), a drug addict who always asks him for money and who he can never refuse because, no matter what she does to hurt him, he's her father. By coincidence, he winds up sitting next to one of his daughter's childhood friends (Stephanie Morgenstern) and the two share an intimate conversation about Stevens' relationship to Zoe.

It's during one of these scenes that Ian Holm delivers one of the best performances I've ever seen him give. He recounts a story of how Zoe nearly died as a child from a spider bite, and that her throat might close up as a result. If that happened, he would have to perform an emergency tracheotomy on his infant daughter: he would have to cut open his own daughter's throat in order to save her life. It's a stunning, understated performance that says everything about the all-consuming love of a father for his daughter.

The Sweet Hereafter is, at its core, a film about grief, but not a pretty, cathartic grief. The kind of grief that can wound and scar, the kind that can change a community from a place where nothing much happens to a place where Something Happened, the kind that can't be resolved in 112 minutes. One parent (Bruce Greenwood) spends most of his time being drunk, angry and having an affair with one of the other parents. The parents of the only surviving child (Sarah Polley) clearly have no idea how to deal with the fact that their daughter is in a wheelchair and will never walk again. The bus driver, (Gabrielle Rose) who always thought of the kids on the bus as "her" kids and has pictures of every child on the bus on her wall, is wracked with guilt, even though the crash probably wasn't her fault.

The way in which the film displays this kind of widespread, inarticulate grief and rage within a community hit a nerve with me because I grew up in a small town, and we had our own 'bus crash'. When I was 13, a car containing four young men from my village crashed on the road coming into town, killing all four instantly. In a village of just over a thousand people, the effect of this was both instant and staggering. Memorials were held, plaques were put up, trees were planted, and everyone wondered just how something like that could have happen in a place like this.

The Sweet Hereafter captures that same sense of a community being completed floored by a small, sudden tragedy, the sense that something terrible has happened and that, for some people, things will never get better. It's a courageous stance to deny people the easy catharsis most films traffic in, though not really the most hopeful. Then again, you're probably looking in the wrong place if you expect hope from a film about children dying in a bus crash.
By Edwin Davies
Labels: film review
Newer Post Older Post Home