The Dixie Chicks: Shut Up & Sing

You have the right to express yourself, just not in public 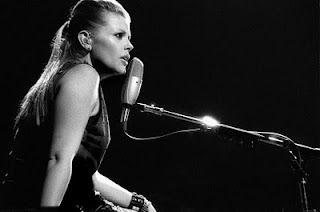 "Just so you know, we're on the good side with y'all. We do not want this war, this violence, and we're ashamed that the President of the United States is from Texas."

Those three sentences, spoken by Dixie Chicks vocalist Natalie Maines on stage in London on the eve of the 2003 invasion of Iraq, suddenly thrust the band - who were at the time one of, if not the, biggest acts in country - into a political maelstrom that saw them denounced as unpatriotic, vilified in the press, and even sent hate mail and death threats.

In the interest of full disclosure, I'll say now that I have no strong feelings one way or the other about the music of The Dixie Chicks. It's not that I don't like them, it's that prior to watching this film, I'd never listened to them.

"Shut Up and Sing", which begins as the band set out on their fateful 2003 Top of the World Tour, chronicles the backlash within the country community that Maines statement had , as well the toll that being pariahs had upon the band members themselves. Following them over three years, it gives the audience an unwavering insight into the lives of three women trapped in a whirlwind, but who eventually weather the storm together.

Given that she was the one who make "the comment", film devotes a lot of time to Natalie Maines, who became the focal point for much of the bile and hate aimed at the group. We even get to see, in one horrible moment, her reaction to receiving a death threat (one of many, no doubt). Over the course of the film, I fell a little bit in love with Maines, not because she's attractive (although she is) but because she is a strong, independent woman who spoke her mind and then refused to bow down when everyone told her to shut the hell up. Maines bears the slings and arrows of her detractors with bottomless grace, poise and a righteous anger that is best exemplified by her calling George Bush a "Dumb fuck" on camera.

More importantly, though, the film shows us how The Dixies Chicks is a much a family as it is a band. The film jumps between 2003 and 2005/6, during the recording of their multi-Grammy winning album, Taking The Long Way, showing us that whilst they can put some distance between themselves and the comment, they are inextricably linked to it and are now different people for having gone through that together. As we see Emily Robison give birth to twins, whilst her bandmates sit with her in the delivery room, we get a real sense of the love they feel for each other. Elsewhere, we see the Chicks hanging out together backstage, joking around and being ordinary people caught in an extraordinary situation. It's impossible not to feel for them as they try to figure out how to navigate the treacherous waters they have stumbled into.

Of course, we don't need proof that they love each other; the fact that the band stayed together is proof enough. Even though it was Maines that made the comment, Emily Robison and Martie Maguire never abandon her to take the blame all by herself. They stand by her through it all, and in an incredibly moving interview towards the end of the film, Robison cries as she says that she would happily quit if it meant that Maines wouldn't feel guilty anymore about putting her friends through that. It's a beautiful moment that encapsulates all the warmth and love these women have for each other, a love that allowed them to overcome an event that could have destroyed them. As much as it's an anthropological document about a very specific point in America's recent history, it's a film about friendship and the ties that bind us all together, and that help us get through life.