You've gone all Charlie Chaplin again. Silent, I mean, not schmaltzy and unfunny. 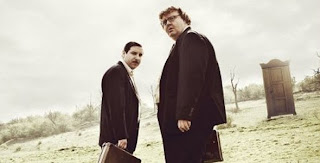 It's a great shame that Skeletons has become one of the most discussed British films of the year because of its lack of distribution, rather than because it's a strange, interesting and delightful film made with real care and love. Of course, most people won't know that, because they won't get the chance to see it until it crawls onto DVD at some indeterminate time in the future.

Bennett (Andrew Buckley) and Davis (Ed Gaughan) are a pair of exorcists who are hired by people to uncover the secrets that they otherwise hide from the world. The skeletons in their closets. At the start of the film we see both how and why they do this job. A couple who have decided to get married want to know everything about each other so that they can enter their new life completely free of baggage. They fill in a long, complex form, then like Ghostbusters, Bennett and David take readings, don special goggles, and use a cupboard as a gateway into the most intimate memories of their clients. Afterwards, they reveal their findings and leave the house so that the couple can come to terms with all that they have learned about each other.

The first twenty minutes of Skeletons feel like a lost long Pete and Dud sketch as Bennett and Davis spend their time in between jobs just talking to each other about whatever comes into their minds. Of particular interest to Davis is the moral superiority of Rasputin to someone like Gandhi. Not because Rasputin was a good man, but because he was transparent in his corruption, whereas good men like Gandhi, Martin Luther King Jr. and Abraham Lincoln presented public faces which might not have matched their private lives.

Buckley and Gaughan are an established comedy duo, and the idle warmth of their back-and-forth banter does a lot to establish that these men have been friends for a long time and are completely at ease with each other. It makes their conversations funnier, but also makes the drama that creeps into the fantastical story all the more believable.

Bennett and David do a few of these jobs in a row before taking a week off. Bennett is worried about Davis, who doesn't seem to have any friends and spends all his down time alone in a shack near a power station. He's right to be worried, because Davis has taken to "glow chasing", a practice in which someone enters their own memories in search of something that they have lost. Davis continually revisits a memory in which he, as a child, sits on a sofa with his parents and his father tells him a bedtime story. When Bennett finds out, he's horrified; this has happened to other operatives and they've been driven mad by the build-up of psychic detritus that results.

Despite his concerns, Bennett doesn't inform their boss The Colonel (Jason Isaacs) because he's got a big job for them that could see them promoted from handling domestic secrets to the big stuff. Politicians, celebrities, bankers. As The Colonel says: "Imagine the filth".

The job; go to a house in the country and find out what happened to the father of a young family who disappeared eight years ago. Things quickly become complicated, as these things are, by both Davis' own personal problems and the general weirdness of the house and the family, particularly the silent daughter, Rebecca (Tuppence Middleton) who doesn't want anyone prying.

Writer-director Nick Whitfield wrote Skeletons in the wake of his father's death, and whilst the film is not overtly about death, it is about accepting that things change and that the only thing the living can do is learn to move on. As such, there's a rich vein of melancholia running through the film that anchors the fanciful premise and makes the relationship between Bennett and Davis seem real. It's quite a personal film that a lot of care and love has gone into crafting. The rules of the exorcisms are nicely worked out, though Whitfield occasionally just has the characters say a bunch of stuff that doesn't make sense to keep things moving along (I have no idea what a Corpse Road is, or why it would prevent them from carrying out their work) but the charm of the cast carry the film through its narrative hiccoughs.

It's not a perfect film, largely because the real world sections that make up the majority of the film occasionally drag and fail to engage in the way that those set in memories do, but its attempt to meld Charlie Kaufman metaphorical oddness to Pete and Dud mundanity is fascinating and engaging enough to carry it along. If you can find it, you must absolutely check it out.
By Edwin Davies
Labels: film review
Newer Post Older Post Home