You Should Be Watching: Justified

When I started "You Should Be Watching", I intended for it to be a fortnightly feature, but I ran into a little trouble with the second show I wanted to write about which has led to a bit of delay. Since this feature is meant to be an outlet of pretty much pure positivity, to counter the negativity that tends to proliferate the Internet in general, I want to do justice to the shows that I write about, and I found myself really struggling to sum up what was so great about the show I wanted to talk about. (I'll stop pussy-footing about: it's Friday Night Lights, which everyone should be watching.)

I've reached a breakthrough with it, but since I want to watch a few more episodes of Season 4 before I write about it, I felt that I should turn my attention to another terrific show that I could more readily summarise, primarily because it only just finished its first season a few months ago, and so there is less plot to condense. With that, let's put on our white hats and talk about Justified. 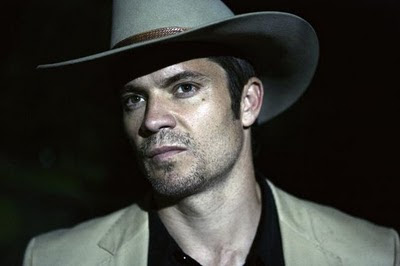 Elmore Leonard is an author whose work is often adapted for the big screen, yet who has found little purchase in the realm of television, even though his brand of clever action mixed with equally clever dialogue seems tailor made for the medium. Apart from an aborted attempt to turn his novel Out of Sight into a T.V. show named Karen Sisco, the man who has spent six decades writing some of the most entertaining genre fiction ever has seen his work confined solely to the cinema, despite the fact that his laconic dialogue, finely drawn characters and action-packed plots are perfectly suited to the weekly format of a television show.

With Justified, executive producer Graham Yost (most famous for being the credited screenwriter on Speed) took a character featured in several novels and a fairly obscure short story by Leonard ("Fire in the Hole", which was the basis for the pilot) and spun it off into a delightfully entertaining series that mixes all the elements that make Leonard's novels and short stories so unique and fun with the serialised storytelling of television.

The show begins in Miami. Marshal Raylan Givens walks through a high end, open air club and sits down opposite a local lowlife. After a bit of verbal sparring, we learn that Raylan gave the guy 24 hours to get out of town, and that time is almost up. A few unbearably tense minutes pass, and at the last moment the lowlife goes for his gun. He's too slow, though, and Raylan shoots him stone dead. The shooting gets a lot of press attention, and Raylan's bosses decide that he's too much trouble to have around, so they pack him off to Harlan County, Kentucky, Raylan's home turf and a place which he has spent his whole life trying to escape.

As Raylan finds himself stuck somewhere he thought he'd never see again, he starts to reconnect with those parts of his past he had tried to forget; his ex-wife, his criminal friends, and his messed up family. As the first season progressed, he found his personal life gradually bleeding into his professional life as he found himself coming up against the Crowder family, a clan of crooks with ties to his father. In between, he has to solve a variety of crimes in his own inimitable style, which involves a lot of fistfights and shooting. (Seriously, if you're under investigation for a possibly unjustified shooting, wouldn't shooting a bunch of other people get you into a lot more trouble?)

All of that intrigue and plot would be for nought if the show didn't have a strong actor as Raylan at its heart, someone who could both convey his suppressed rage and complicated relationships whilst also delivering the dry wit that characterises Leonard's best work. Fortunately, the show had Timothy Olyphant, who has never been more perfectly suited to a role in his life. 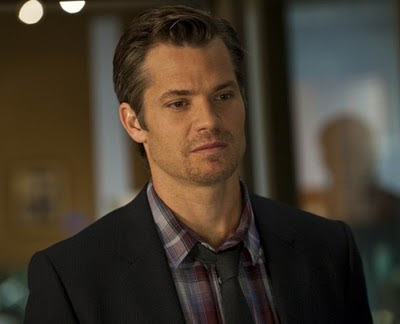 I've been a fan of Timothy Olyphant for a few years now, ever since I saw him as Sheriff Seth Bullock in HBO's Deadwood (one of my all time favourite television shows) but even in that I felt he wasn't quite fulfilling his true potential. As a lawman who finds himself squaring off against much more flamboyant antagonists like Ian McShane's Al Swearengen, he was always the most earnest and straight-laced character, and he rarely got the chance to be anything else.

In Justified, though, Olyphant gets the chance to loosen up and not just be intense, but cool. He perfectly suits the laconic tone of the show without even undercutting the tension or the complexity of Raylan's life and work. He's as fun and compelling talking to a suspect outside their house as he is dealing with a hostage situation or engaging in a firefight. It's a really entertaining performance that is as pure a distillation of Elmore Leonard's particular style as any adaptation has ever managed.

Though Olyphant is the undoubted star of the show, the supporting cast are pretty sharp too. Unlike Dexter, which is probably the show that Justified most closely resembles, it doesn't take the lives of its supporting cast too seriously, and is content to let them act as flavour to the main action. (Not to insult Dexter, which is a show I enjoy, but it always falls short of greatness for me because of how dull the supporting cast are; they are dead weight around Michael C. Hall's neck.) We don't need to know much about the homelife of his boss or the attorney hired to investigate him, we can just enjoy them shooting the shit and shooting at shit. 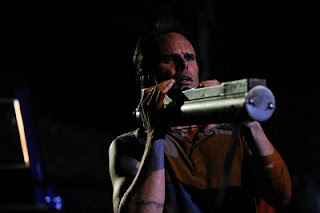 I love Walton Goggins. He's easily one of my top five actors currently working and there are precious few actors who could rival the work he did over seven series of The Shield, in which he got to play Shane Vandrell, one of the most complicated bastards in television history. A man who was pathetic and funny and evil and loving all at the same time, a man who loved his family but could murder one of his best friends in cold blood. The finale of The Shield, "Family Meeting", wouldn't have the same emotional impact without him, and as soon as I found out he would be a regular on Justified I began salivating at the possibilities.

Even more than Timothy Olyphant, Walton Goggins uses the show as an opportunity to take a step back from the heavier work that he is more famous for in order to relax and have a bit of a laugh. He's a deadly serious character who, in the pilot, blows up a church and murders his accomplice, but Goggins gives the role an energy that is intoxicating. After Boyd survives being shot by Raylan at the end of the pilot, he undergoes a (possibly fake) religious conversion in prison, and Goggins plays his change with a wink in his eye, suggesting that he might be doing it all to mess with Raylan, but also with a sincerity that is hard to doubt. It's a delicate balancing act that makes for some of the series' best moments. In fact, any of the scenes between Olyphant and Goggins are winners, as the actors convey an unspoken and treacherous history that never quite overcomes the sense of warmth and familiarity they have with each other.

I've spent a lot of time talking about the characters, rather than the plot of the show, but that merely reflects the priorities of the showrunners. It's the television equivalent of what Quentin Tarantino calls "hangout movies"; films which are low on plot but high on character interaction and playful fun. The individual episodes often revolve around a crime of the week, be it murder, parole dodging or assault, with some longer plot arcs occurring in the background such as Raylan's family history and his father's shady dealings. The plots vary in quality, with some being inventive and others being functional, but Olyphant and the rest of the cast, as well as the sparkling dialogue, keep things interesting even when the plots themselves are lacklustre. And when the plots are great? Then you hit a sweet plot of near-perfect entertainment.

If you only watch one episode...

It's perhaps a little too neat to say "The Pilot" (also known as "Fire In The Hole"), especially since there are plenty of really good episodes after it, but it so beautifully boils down everything good about the show down into one sixty-minute stretch that I couldn't really say anything else. Taking us from Miami to Harlan County in the first ten minutes, the economical storytelling that gives Justified the muscular power to match its biting wit is on full display, and it just ramps up from there as Raylan is reintroduced (and we are introduced) to all the people he tried to leave behind forever. It also introduces Boyd who, as I've already aid, is second only to Raylan as the best character in the show (although Boyd's dad Bo, played by M.C. Gainey, comes pretty close). It also serves as a calling card for the show's mix of crime of the week and longer arcs; Raylan catches Boyd for blowing up a church, but he's still stuck with no clear idea of how he's going to get home. You can watch the episode as a standalone detective story and it works fine, but so much is set in motion that you'd be hard pressed not to want to see what else the show has to offer.
By Edwin Davies
Newer Post Older Post Home