Doctor Who - Flesh and Stone 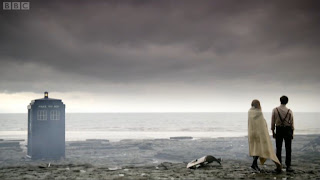 I keep expecting this series of Doctor Who to slip up and, whilst I thought that this week's episode was pretty weak, overall I'd say that so far it hasn't set a foot wrong, and even the weakest episode of this year's run is better than some of the terrible, terrible episodes that the series has produced.

So, last week we left The Doctor, Amy, River Song and the remaining clerics surrounded by the Weeping Angels, who were all advancing towards them amidst flickering lights. The Doctor grabs a pistol, fires it at the light orb that the group brought with them, and tells everyone to jump. For some reason that is a little too hastily explained, this allows them to manipulate the artificial gravity of the Byzantium, the crashed spaceship that brought The Doctor there in the first place, and they are able to get inside just before the Angels do. What then follows is an episode-long game of cat and mouse in which The Doctor and co. have to run through the ship, and then through its artificial forest, with the Angels in hot pursuit.

I said last week that I thought that the triumph of The Time of Angels was that it brought the Weeping Angels back without diminishing their essential power to terrify. Well, this week they lost an awful lot of their mystique and menace. Having them kill people, rather than misplace them in time, turned them from the mysterious and infinitely creepy villains of "Blink" into stock baddies. Worst of all was the moment when Amy, who can't open her eyes for reasons I'll go into later, walks through a bunch of fleeing Angels who stop still because, in their fear, their instincts have kicked in and they only think that she is looking at them. I'm sorry, that just doesn't really work in terms of the established rules of the Angels, even the ones that were in use just one episode before. Admittedly, the moment when they realised that Amy wasn't looking at them and that they could move was eerie, but not so eerie that it warranted sacrificing the elemental power of one of the recent series' best creations.

Aside from that fairly major gripe, there was a lot to like in this episode. Matt Smith was great, and really seems to be having a lot of fun playing up the impish professor aspect of The Doctor's persona ("This is bad. This is extremely, very not good.") and he had some real chemistry with the rest of the cast this week. This was the first episode since "The Eleventh Hour" in which he's spent large amounts of time with characters who aren't Amy, and it was great seeing him interact with them. I particularly like the scene in which Bishop Octavian (Iain Glen) was held by the throat by an Angel, forcing The Doctor into a Catch-22 situation; Octavian could only escape if The Doctor looked away, allowing The Angel to move, but if the Angel moved the first thing it would do would be to snap Octavian's neck. Smith and Glen really captured the poignancy of the scene, as The Doctor was forced to admit that he couldn't save Octavian, lamenting that he wished he knew Octavian better, to which Octavian replied, "You knew me at my best." It was a quiet moment amidst the bombast that I found quite affecting.

I also liked the Eleventh Doctor's relationship with River Song (Alex Kingston), who is a character I find quite interesting. On an episode by episode basis, it's good to see someone show up who knows more than The Doctor does about his own life since it throws the usual dynamic of the show off-balance ever so slightly. The Doctor still ultimately saves the day, but those moments of insecurity and confusion do a lot to shake things up and prevent him becoming an infallible Christ-figure. From a broader perspective, her presence in the show is intriguing, since it suggests a much greater plan in which we may get an understanding of The Doctor's past/future ("I look forward to it."/"I remember it well."), especially since this episode heavily implied that River will, at some point, kill The Doctor. It also helps that Kingston and Smith have a great deal of fun with the characters, and really throw themselves into the suggestive dialogue, and exchanges like this:

Karen Gillan did some of her best work of the series so far in this episode, as she was required to do much more than just be feisty; she had to be vulnerable. As the result of staring into the eyes of an Angel in the previous episode, it was revealed that Amy had an Angel in her her, and that it would slowly kill her. The Doctor, figuring that the Angel feeds on images, told Amy to close her eyes, forcing Gillan to play most of the episode with her eyes closed. Even before she closed her eyes, Gillan beautifully played the scene in which she was close to death thanks to the Angel, but after she closed her eyes, she really delivered. Her sense of fear and frustration as she was forced to stay behind was palpable, and her brief conversation with The Doctor before he left was loaded with hidden meaning and longing, especially the exchange,"You don't always tell me the truth"/"If I always told you the truth, I wouldn't need you to trust me", which perfectly summed up her relationship with The Doctor. As for the scene at the end of the episode in which she tries to seduce The Doctor? It was very silly, but quite funny, so I'll leave it at that.

(Incidentally, I've written this review a few days late for a number of reasons, but one of the benefits of that has been that I've managed to read some of the discussion and theories about the episode that I usually avoid so as not to colour my own opinions. The most fascinating one I've read is one about the scene mentioned above in which The Doctor briefly returns to talk to Amy after leaving. If you watch the episode back, The Doctor is wearing the jacket that he lost, and which the show took great pains to point out that he lost, earlier in the episode. This has many people suggesting that this Doctor is a Doctor from a future episode who has traveled back to try to get Amy to remember something important. It could just be a continuity error, but the abruptness of his return and departure, coupled with the fact that the conversation has nothing to do with the episode as a whole, suggests that it could be a clue to later events.)

This episode also offered up a lot of information about the "cracks" that have been appearing throughout this series. We already knew that they represent a point at which two events in space-time have met which shouldn't have, but now we know that they are inextricably link to a specific date (26th June, 2010) which is when time will "run out", whatever that means, and that they appear to be following Amy around. It's also heavily suggested that the cracks, which eat up space and time, causing people and places to cease to exist, are responsible for Amy not remembering who the Daleks are, or why no one remembers a giant Cyberman rampaging through Elizabethan London. Could this all be an elaborate way for Steven Moffat to retcon the RTD years and start afresh?