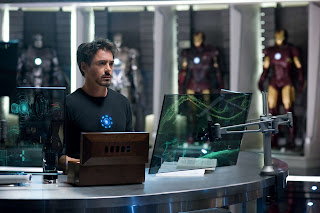 When last we saw billionaire industrialist, playboy and part-time superhero Tony Stark (Robert Downey, Jr.), he had just revealed to a packed press conference that he was Iron Man, who he had previously pretended was his bodyguard. Fast-forward several months, and the fall-out from that announcement has been mixed. Stark can claim to have "privatised world peace", and become a one-man nuclear deterrent thanks to his suit, and is enjoying the adulation that comes with that. However, a U.S. Senator (Garry Shandling) wants him to turn over the Iron Man suit to the military, Justin Hammer (Sam Motherfucking Rockwell) wants to build his own version of the suit, and, to top it all off, Stark's increased usage of the suit, and the Palladium core that keeps him alive, is slowly starting to poison him.

But that's not all that's going on. Ivan Vanko (Mickey Rourke), a Russian physicist whose father worked with Stark's father but who was deported years before, sees an opportunity to wreak revenge on the family that has wronged him, and sets about using Stark's technology against him. Then there's some stuff with Scarlett Johansson and Samuel L. Jackson, but they're not really that important.

That incredibly busy plot description (and that's only the first 20 or 30 minutes of the film) may recall the spectre of Spider-Man 3, a film which tried to juggle too many characters and plots and wound up falling flat on its bloated face. However, Iron Man 2 manages to avoid this pitfall by making sure that the threads don't stretch too far, and remain close to the central ball of yarn (I think there's something in the Geneva convention about torturing metaphors this much). After Vanko attacks Stark in Monaco, whilst the whole world watches, he is arrested and secreted away to work with Justin Hammer, so the film very quickly gets the two villains working together, even if they may not necessarily be working towards the same ends: Hammer just wants to copy Stark's suit, Vanko want blood.

It's worth pointing out at this point how good Sam Rockwell is as Justin Hammer. I love Sam Rockwell in general, I think he's a terrific actor who's great in everything, but here he really brings life to a character that could have been very boring. Rockwell plays Hammer as a man with the world's biggest inferiority complex; In the early scenes of the film, in which he is trying to upstage Stark at a Senate hearing and points out that he is being profiled by the same journalist who profiled Stark in the first film, we get a sense that he is trying to outdo Stark in any arena. He's a very nervous guy who never really seems in control. Even when he's talking to Vanko, who is supposedly working for him, he is completely unable to impose himself.

Mickey Rourke's also great, and between him and Rockwell you have much more dynamic antagonists than Jeff Bridges in the first film. This cuts to the heart of what I liked about the film; director Jon Favreau and writer Justin Theroux don't seem intent on making a bigger, louder version of the first film, but a film that has everything good from the first film and none of the bad. We get the effortless charm of Robert Downey, Jr., who nails Stark's mixture of bravado and angst like no one else, fun dialogue between him and the rest of the cast (such as a returning Gwyneth Paltrow, and Don Cheadle who replaces Terrence Howard as Iron Man's friend James "Rhodey" Rhodes, who gets to suit up this time around) and plenty of little winks and nods to the comic-book crowd that don't distract from the action. (Well, except maybe for the post-credits tease.)

The villains are more compelling, driven as they are by a thirst for revenge and greed, the action is swifter and more dynamic (just compare the fight between Obadiah Stane and Stark that ends the first film with the battle between Stark, Rhodes and 30 drones in the sequel; they both last about the same time, but one is clunky, plodding and clumsy, the other is swift, sprightly and punchy), and the overall package is a shinier, sexier version of the original. It's not a new model, just a suped up version of the old one, but it's still a great ride.
By Edwin Davies
Labels: film review
Newer Post Older Post Home