Doctor Who - The Vampires of Venice 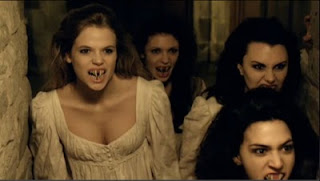 Try as I might, I can't seem to get away from the idea that every new episode of Doctor Who is somehow a 'test' for the new creative team under Steven Moffat's leadership. The first episode was a test of Matt Smith as a new Doctor and of Moffat's ability to establish the new look and feel of the series. The second was a test of how well Moffat could expand on the character of Amy. The third episode was a test of how the show would square its new direction with its old enemies and mythology. The fourth and fifth were a test of Moffat's ability to bring back in his own creations and really bring the serialisation to the fore with his explanation of the "cracks" in time and space.

This way of thinking, whilst intellectually satisfying since it allows me to read perhaps a little too much into my favourite silly sci-fi show, also gets in the way, since I end up putting too much importance on what individual episodes mean for the series, rather than just surrendering to the fun of the plot and enjoying the characters with the sort of abandon that I would if Moffat's tenure as head writer was in its third season, rather than its inaugural.

With that in mind, I found myself thinking of The Vampires of Venice as a test of how the show would work with episodes that Moffat hasn't written the scripts for himself, but which he had only overseen as executive producer. Yes, Victory of the Daleks was written by Mark Gatiss, but that episode was devoted more to re-establishing the Daleks than telling its own self-contained story. This week's episode, written by Toby Whithouse, was all story, with a teeny bit of mythology thrown in to the mix, and I couldn't help but feel that it was the weakest of the run so far.

But before I get into what I didn't like about the episode, let's say what it was about. Following on from last week, which ended with Amy throwing herself at The Doctor and The Doctor not being receptive (partly because he's an alien, but mainly, in my view, because he's crazy - as any man must be - to turn down Karen Gillan), the episode started with The Doctor jumping out of a cake at Amy's fiance Rory's stag do and, after a bit of funny pitter-patter in which he reveals that he kissed Amy ("You're a lucky man, she's a great kisser. [Oh-so-Awkward pause]Funny how you can say something in your head and it sounds fine.") he whisks both Amy and Rory away to 16th-century Venice so that they can have a nice romantic break to try and reconcile with each other.

But the best laid plans of mice and Time Lords gang aft agley, and The Doctor, Amy and Rory soon find themselves trying to uncover the secrets of shadowy school full of pale, creepy girls who don't like sunlight and can't be seen in mirrors.

So, they're fighting vampires, right? No, and that was where my problems with the episode started. For the first half of the episode, I was completely on board. Whithouse's script was full of funny little character moments that made good use of the strained relationship between Doctor, companion and boyfriend (specifically, the scene in which the debated whether it was more believable that Rory should say that he is Amy's brother, rather than her fiance, in order to infiltrate school) , and all the actors threw themselves into a light, throwaway story about vampires.

Once it became apparent that they weren't vampires, but where in fact giant fish creatures wearing cloaking devices and were exploiting the vampire mythos, the episode lost me. Admittedly, the show did try to shrug off its shift to the ridiculous by acknowledging it (The Doctor, to Rory, explaining what the creatures are: "As I said, they're not vampires. Fish from space") but its clumsy attempts to explain why sunlight hurt them (is there some biological law that says that fish don't like sunlight that I'm not aware of?) just hurt the episode. It was a bit too much of a cop out for me, though that may be because I've always been a bit of a vampire nut and so was hoping for a twist on the mythos, rather than just a co-opting of it.

I think the main problem may stem from Toby Whithouse's writing. Now, I love Toby Whithouse's series Being Human, which I think is one of the best British fantasy series of the last few years, but that is a show that is built on character interaction and moments of normality against the backdrops of evil plans. That works well when you can spend episode after episode exploring the characters and either moving the plot along by increments or ignoring it entirely, but Doctor Who is much pacier and that approach just can't keep an episode running.

By no means a terrible episode, but the weakest of the current run.

Note: I'm going to be in Florida for two weeks, so I won't be writing up the next two episodes after they air. I will, however, catch up with them on iPlayer, so the write-ups will happen, just not immediately.