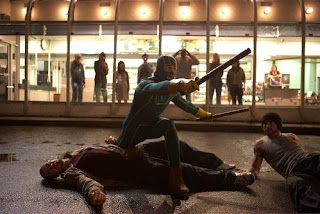 When I was originally planning this review (Because, all appearances to the contrary, I do put at least some thought into these.) I intended to break from the usual structure and use it as a riposte to Chris Tookey's review in the Daily Mail which, with its alarmist tone ("Verdict: Evil") and overwrought prose ("Do we really want to live, for instance, in a culture when the torture and killing of a James Bulger or Damilola Taylor is re-enacted by child actors for laughs?") seems more like a parody of a reactionary Daily Mail review than an actual analysis of the film.

I had intended to write this review that way, but then Roger Ebert wrote a similarly damning, though far less shrill, review, and I had to abandon it. How could I snarkily dismiss the opinion of a critic I don't respect without dismissing the opinion of one of the greatest practitioners of the craft that I amateurishly practice? That's like The Black Eyed Peas releasing a single called "Fuck you, Mozart".

So, before I actually tackle the film, let's talk about the element that both Tookey and Ebert have taken issue with. Yes, in the film Hit Girl, an 11-year girl (played with fiery wit and energy by Chloe Moretz), commits shocking acts of violence multiple times and, towards the end of the film, is herself the victim of similar violence when she is beaten to a pulp by Mark Strong, playing the film's gangster villain. And, yes, violence involving children is reprehensible. There's no denying that.

However, what is needed when watching the film is a healthy dose of perspective. The violence in the film is depicted in a way which does not linger on the acts themselves, and they take place within a silly, comic-book context, as indeed does Hit Girl's use of profanity. If, within that context, you still find it distasteful, then this film really is not for you.

Now, on to the film itself.

I had very high hopes for Kick-Ass. I haven't read the graphic novel (and I have no intention to since I think Mark Millar is a hack whose writing is juvenile and pretentious) but I greatly enjoyed Stardust, the film on which director Matthew Vaughn and co-writer Jane Goldman previously collaborated, and I thought that if they brought the same light sensibility to this dark and satiric take on superheroes, then it could make for a fun ride.

Which made the actual experience of watching the film hugely disappointing, since I found the first two-thirds only fitfully entertaining, and I felt terribly unengaged. I appreciated its deep knowledge of comic-book archetypes (the young hero, the violent vigilante with a tragic past, the gangster as villain, corrupt cops etc.). the way it was able to nod subtly at iconic superhero movies such as Superman (the film opens with the camera flying through clouds in a clear nod to the opening of Superman: The Movie) and Spider-Man 2 (the scene in which Peter Parker leaps between two buildings is recreated) without them distracting from the story, and I thought that the way it used the superhero genre to comment on modern concerns like social networking and instantaneous celebrity was pretty savvy. But that was as far as I was able to go. I appreciated it, but I didn't enjoy it.

This is largely because the film adopts an ironic, detached tone that allows it to mock its characters without showing any empathy towards them. Mark Millar said that one of the key factors in his decision to write the comic of Kick-Ass was that he wondered why no one had ever tried to create a modern day equivalent to Spider-Man. But unlike Peter Parker, whose young everyman character was what always drew me to Spider-Man over other superheroes, I just didn't care about Dave Lizewski/Kick-Ass. He's meant to be charmingly strange and awkward (Like the intended audience, perhaps.) but he just comes off as a delusional fantasist who takes it a step too far. Admittedly, he's funny, but when he gets stabbed by a thug and run over by a car - damaging his nerve endings and, in the process, giving him the ability to ignore pain that is his only superpower - I didn't care. And his attempts to become a superhero in a (relatively) realistic world was funny, but I never felt like the film was doing anything beyond following the pattern of a dozen movies, without making any serious comment on the tropes that it was satirising.

The same could not be said about Big Daddy (Nic Cage), who I cared a great deal for, and whose role in the film ultimately redeemed it. Maybe it's because his pursuit of violent vigilantism comes from a place of genuine pain and anger (His prior relationship with Mark Strong's character lead to the death of his wife.) and his relationship with his daughter Hit Girl, who he trained from a very young age to be a foul-mouthed killing machine, had a genuine poignancy to it. He's clearly a deeply damaged person whose desire for vengeance has spanned generations of his family. His arc in the film is the only one that the film doesn't view behind a veil of irony, but embraces, and Cage plays him just right. When he's Big Daddy, he speaks with a stilted timbre that is clearly modelled on Adam West, but as Damon MacCready he is a doting and affectionate father. Even if he is quizzing his daughter on knives and guns, he talks in the light, comforting tones of a father telling his daughter a story.

But, and it is a very big but, the film redeemed itself in its final third by dropping that ironic distance. Hit Girl stops being just a cold, calculating killer and gets to play an angry, scared little girl, and the film is suddenly imbued with an emotional core that it lacked until that point. Much like Dave Lizewski stops pretending to be a superhero and actually becomes one, Kick-Ass stops pretending and gets on with the business of being an actual superhero movie. What follows is a deliriously violent, operatic and melodramatic finale full of blood, death and inventively choreographed action sequences that fully realise the edgy, exciting manifesto of the film.

It's not the second coming that some people say it is, and the first two-thirds feel terribly by rote, with the scenes only following each other because they are supposed to, but once that final half an hour kicks in, it's pretty special.
By Edwin Davies
Labels: film review
Newer Post Older Post Home