Doctor Who - Victory of the Daleks 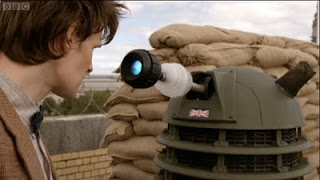 Going into this week's episode, I had high hopes. The opening two episodes set a very high standard for the rest of the series to follow, the World War II setting promised lots of old-school Doctor and companion in an historical time period fun, and it promised a confrontation between The Doctor and the Daleks, his most iconic and - given that they have become extinct on at least three separate occasions since the show returned - most resilient foes. Throw in that it's written by Mark Gatiss, who had written two very good episodes during the RTD era ("The Unquiet Dead" and "The Idiot's Lantern") and is generally one of my favourite television writers, and it would be safe to say that my expectations were rather high.

It's not surprising, then, that the episode didn't match them. Not that it's a bad episode by any means - if it had been written under the old regime I probably would have been ecstatic about it - just that the pieces of the puzzle got me so excited that I expected it to do too much.

But let's focus on what the episode did do, rather than what I hoped it would.

Although I do have a great deal of love for the show, I've always found the episodes of Doctor Who that feature real figures from history to be amongst the weakest. (With the notable exception of "The Unquiet Dead", which made good use of its Victorian setting and use of Charles Dickens as an historical companion.) They always seem to rely too heavily on culture-clash comedy, rather than the dramatic possibilities of aliens with advanced technology existing in a time when people would be ill-equipped to help them.

"Victory of the Daleks" bucked this trend decisively by making that notion of alien technology in a simpler age central to its story. After receiving a phone call from Winston Churchill (Ian McNeice) at the end of the last episode, The Doctor and Amy land in London during the Blitz (A month after Churchill called them. The Doctor arriving at the wrong time seems to be a recurring idea in the show this series.) just in time for them to witness a display of the latest weapon in the war effort: Bracewell's Ironsides, which suspiciously resemble Daleks because they quite clearly are.

But The Doctor has to convince everyone that the Daleks are, in fact, the evil killing machines that he (and we) know them to be. Which proves difficult since they seem so damnably nice. At one point one of them even asks if The Doctor would like some tea. And they look pretty natty in their Home Guard colour scheme. It also doesn't help that their namesake, Dr. Edwin (woo, my name on national television!) Bracewell (Bill Paterson) claims to have invented them. It's not surprising that The Doctor becomes frustrated as he tries to uncover what exactly their plan is.

As it turns out, The Doctor's frustration is central to the Daleks' plan. Because these Daleks are mutants created from human genetic material in previous series, they are considered "unclean" by their own technology and can't use the Progenitor, a device that will allow them to recreate the Dalek race. Once The Doctor screams "I am The Doctor, you are the Daleks", they have the proof that they are Daleks and can start the machine to create a new race (in a new range of fetching colours to match your every mood) which promptly kill their resurrectionists for being unclean. It was a nice touch having the Daleks talk about being the "Master Race" and committing what amounts to an act of ethnic cleansing against the backdrop of the fight against Fascism.

There were some great moments tonight between The Doctor and the Daleks, ones that once again confirmed (to me, at least) that Matt Smith was the right man for the job. Being able to have conversations with objects as unemotional and static as Daleks, and to make those scenes exciting, dramatic and full of conflict, requires real skill. As soon as Smith left the TARDIS holding a Jammy Dodger (he was promised tea, after all), claiming it to be the TARDIS's self-destruct mechanism, he created a believable and compelling energy between himself and the Daleks that added real weight to the possibility that they might destroy the Earth he didn't stop them. Or, more accurately, that they would destroy the Earth if he did stop them.

This week presented The Doctor with a difficult choice, one which would have a bad outcome either way, the only difference being how bad. On the one hand, he disrupted the shields of the Daleks ship, giving a suped-up Spitfire the chance to blow up their ship, and destroy the Daleks once and for all. Unfortunately, inside the chest of Dr. Bracewell - who is a robot invented by the Daleks, rather than the other way around - is a bomb which would destroy the Earth if detonated. (Incidentally, that battle with the Spitfires in space was awesome. The effects weren't exactly Battlestar Galactica good, but they were a great improvement on some of the series' early dabblings with CGI, and the dogfights were really tense and exciting.)

Therefore, The Doctor had to choose between destroying the Daleks, and in doing so letting the Earth be destroyed, or letting his greatest enemies escape his grasp to wreak havoc on the universe once more. Choice seems to an underlying theme this series, as does the fallibility of The Doctor, and this crucial moment combined those two ideas beautifully. That The Doctor decides to let the Daleks escape, showing his vulnerability, underlines his compassionate side whilst also drawing a line between the Moffat era and the RTD era: before, the Daleks might have been destroyed at the last moment, only to be brought back to life at a later date. Now, they are out in the universe again, a continued threat for The Doctor to worry about.

Amy also got some good moments this week, particularly since it was her realisation that Bracewell could reconfigure the Dalek technology to be used against them, and it felt like she and The Doctor were working as a team, even though they were on separate heavenly bodies at the time. Furthermore, it was Amy who seized upon the idea of getting Bracewell to talk about his (Dalek invented) sweetheart from his (Dalek invented) youth in order to deactivate the ticking bomb in his chest. It was an idea which, if scrutinised too much, doesn't make all that much sense, but Gillan, Smith and Paterson brought a poignancy to the scene that made it feel right in the moment, which is where this show thrives.

As for the mysterious "cracks" in time and space, this week they seemed to be connected to Amy's complete lack of knowledge of the Daleks, despite their very public attacksz on the Earth in previous series, and might have played a part in allowing the Daleks to escape in the first place. Interesting.