I think I'm confused but I'm not sure. 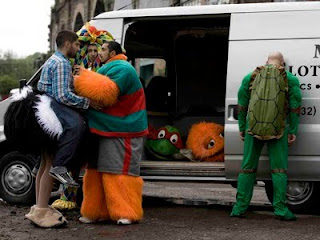 Omar (Riz Ahmed) is the leader of cell of Jihadists that includes the fervent (and white) convert Barry (Nigel Lindsay), the hopelessly naive Fessal (Adeel Akhtar) and the childish, easily led Waj (Kayvan Novak). The group are struggling to find a worthy target in order to achieve martyrdom. Barry thinks they should blow up a Mosque to "radicalise the moderates", which Omar compares to punching yourself in the face in order to win a fight, whilst Fessal thinks the way forward is to train crows to "fly into them buildings full of Jews and slags." Omar and Waj take a trip to a training camp in Pakistan, but even that doesn't help them. Eventually they settle on blowing themselves up during a marathon, but will they be able to get there without getting caught?

Four Lions, the debut feature from Britain's premier comedy provacateur Chris Morris, is one of the boldest, edgiest and most fearless films ever produced by a British film-maker. It's also not particularly funny. That's not to say that I didn't laugh whilst watching it - every few minutes I found myself chuckling at a silly line or piece of slapstick - or that the film is bad, but each of those laughs was strangled as soon as it left my body. As soon as one of the would-be suicide bombers did something funny, my initial reaction would be followed by a disquieting realisation ; the men I am laughing at want to blow themselves up and kill people.

It's an uncomfortable balance the film assiduously maintains, and which is best illustrated by the scenes in which Omar is shown at home with his wife and young son. In the characters' actions and tone they represent moments of cozy domesticity, but they only ever talk about martyrdom and Omar's plan to blow himself up, which the wife and son are completely aware of and support. The contrast between the image of a loving supportive family and talk of death made me deeply uneasy, and whilst I found a lot of stuff in those scenes funny, I couldn't really bring myself to laugh at them because there was a deep sense of tragedy to them. I wonder if Dr. Strangelove had a similar effect when it came out. Because Four Lions, being a film which tackles a scary subject in a way which is funny but doesn't avoid the reason why it is scary in the first place, reminds me a lot of Kubrick's masterpiece.

The film finds Morris at both his most extreme and his most accessible. The plot and subject matter are obviously provocative and controversial, even by Morris' standards, but the actual humour is very broad. There is little of the surreal wordplay that characterises most of Morris television work (though some of the lines spoken in Urdu are reminiscent of Nathan Barley) and, premise aside, the actual content of the film is not as bizarre or disturbing as anyone familiar with Morris might expect. The central characters are simply drawn and are portrayed as bumbling idiots who have no real comprehension of what they are doing, and there is a heavy reliance of slapstick throughout, particularly where bomb-making material is concerned. Much of the film consists of the characters bicker over minutiae which, coupled with the loose shooting style and seemingly improvised performances, makes the group seem like a Jihadi Spinal Tap.

This rather broad style masks the underlying satirical intent of the film, which is to skewer extremism. The film uses the stupidity of its characters to make points about the way in which extremists wilfully misinterpret dogma to justify their actions, as evidenced by Barry who, when trying to convince a young Muslim (Arsher Ali) to join them and justify his plan of blowing up a Mosque, cites "women talking back" to men and "people playing stringed instruments" as examples of how mainstream Islam has failed and a clear sign that the end times are nigh. The overt silliness of the exchange allows the point to be made without feeling like a patronising sermon.

The same is true of the film's treatment of Waj, who initially doesn't have anything to do other than say stupid things, serves as an example of how young, confused Muslims can be tricked and deceived into doing things that they don't understand for reasons that they can't explain. Throughout the film, Waj is told by Omar that they are doing the right thing using an analogy about how life is the queue for Alton Towers, whilst Alton Towers - complete with "Proper Dinghy Rapids" - is the Paradise that they will go to once they have become martyrs. It's a simply, childlike metaphor that charms Waj even though he doesn't think that what they are doing is right. It's this sense of confusion and fear in Waj that gives the final act of the film a heartbreaking sadness and poignancy.

As I said at the start, Four Lions isn't really a funny film, but it would be a far lesser film if it was. The courage of Morris, his co-writers (Sam Bain and Jesse Armstrong, who also co-wrote In The Loop, to which Four Lions bears more than a passing resemblance) and his cast in tackling such a risky subject, and in pursuing it to its tragic and logical conclusion, makes it a much more powerful and damning film than if they had gone for a lighter touch. It's a silly film with a serious point, and it's brilliant.
By Edwin Davies
Labels: film review
Newer Post Older Post Home