Doctor Who - The Time of Angels

*As is only befitting of an episode featuring River Song, this review contains Spoilers* 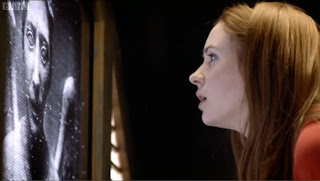 After a brief dalliance in World War II last week, this week finds The Doctor and Amy in a museum looking at ancient artifacts. Well, Amy wonders what they're doing there, The Doctor looks at the artifacts and points out how the curators are "wrong". They reach a display case with a cube inside, a cube that acts as the black box of a ship that crashed 12,000 years earlier. Written on it is a message, a message written in the language of the Time Lords, a message that could only be for The Doctor, a message which says simply, "Hello, Sweetie." The Doctor and Amy travel through time to discover who sent it, and arrive just in time for a woman in an elegant evening dress and impractical heels to fly out of an airlock and into the TARDIS.

With that, we are reintroduced to Professor (well, Doctor, since she won't become a Professor for a little while) River Song, who was introduced to The Doctor in Steven Moffat's great two-parter "Silence in the Library/Forest of the Dead" and is once again played with a great deal of enthusiasm by Alex Kingston. Again, we don't really know who she is, other than that she has a prior relationship with The Doctor (though it's only prior for her, The Doctor has only met her twice at this point. Sweet Christ, time travel is confusing) and that she always seems to show up in bad situations. This time around, she's part of a unit of soldiers/clerics who are after a spaceship - the same spaceship that the cube came from - and its cargo, a statue that is terrifyingly familiar to The Doctor: A Weeping Angel.

My main concern when I heard that the Weeping Angels would be returning as villains on the show was that they might lose the impact of their first appearance. As I've said elsewhere, I think that "Blink", the Moffat-penned Tennant episode that introduced them to the series (as well as Lovely, Lovely Carrey Mulligan) is my favourite ever episode of the show and one of the best pieces of science-fiction television I've ever seen. I was worried that bringing them back after such a memorable and genuinely terrifying debut would lessen their power. Would they still be scary the second time around?

Yep. They are still absolutely fucking terrifying. In fact, Moffat and director Adam Smith managed to eke out new and horrible ways of freaking out the audience without deviating too much from the rules established in "Blink" (namely: they can only move when they aren't being looked at, and if they touch you you'll be dislodged in time, which is as good as being dead).

When we first see the Weeping Angel that River Song and her cadre of soldiers are looking for, it is via a recording of the statue. It's a looped four-second recording that shows the Angel with its back to the camera and its hands over its face. Before we even see its face, the mere presence of the Angel is creepy and unnerving. There's a sense of anticipation to it (or "Patience", as The Doctor puts it) and we're just waiting for it to move.

Once Amy is left alone with the recording, with no Doctor or River nearby to help, it does precisely that. It turns out that any image of the Angels becomes an Angel itself, and the looped recording manifests itself as a holographic Angel that starts to advance on Amy as she frantically tries to get out of a locked room. She eventually figures out how to turn the recording off and briefly vanquish the Angel, again proving herself to be a resourceful and spirited companion, but not without consequences; she starts to rub her eyes and, in a moment that I found unusually disturbing, grey dust pours out of the socket and between her fingers. The whole sequence played like a cross between the last five-minutes of The Blair Witch Project and Ringu and it was as tense, creepy and inventive as just about anything the show has ever done. And it only got creepier from there, as The Doctor and co. had to travel into a deep and dark "Maze of the Dead" full of statues, the perfect place for the Angel to hide.

As an aside, I liked how Karen Gillan winked during her face-off with the Angel, in what is no doubt a subtle acknowledgement of some of the questions raised by their first appearance; if you wink, rather than blink, will the Angels remain in place? Similarly, the episode dealt with River Song's role in the show by having Amy ask both her and The Doctor if she is, or will in the future be, The Doctor's Wife, as evidenced by her knowledge of the TARDIS and referring to The Doctor as "Sweetie". The show managed to be both evasive and declarative on the point (The Doctor said "Yes", but then implied that he was responding to another question; River dodged the question by asking if Amy really thought it was as simple as all that) but that idea of acknowledging the fans without playing to the crowd was just one of the many things I liked about this episode.

I also felt that Matt Smith was terrific in this episode. Admittedly, I think he's been great in every episode so far, but this was the first time that he got to be The Doctor without having to prove that he was The Doctor. We got plenty of physical movement - at one point mid-speech he grabs hold of a piece of cloth hanging from the ceiling which then breaks off - suggesting that he's just got too much energy and too many ideas to stay still. We also found out that he is a fan of simple anagrams ("Sacred Bob? More like Scared Bob now, eh?") and a real sense of the enjoyment that his Doctor has from traveling; he complains when River Song activates the stabilisers during the TARDIS's flight, making it "boring", and is noticeably put out by the lack of TARDIS landing noise when River activates the brakes. Even when he realised that the group had been led into a trap, and that all the statues around them were in fact Weeping Angels, he still found time to be upbeat and bouncy. To top it all off, we entered the cliffhanger at the end of the episode on a typically angry bit of "dick-waving", as my co-blogger Neil puts it, in which The Doctor talks about how great he is and what a mistake the Angels have made.

It's impossible to put a definitive judgement on this episode yet since it's only the first of two parts, and the modern incarnation of the show - outside of Moffat's prior efforts - has a notorious habit of delivering great first halves and disappointing second halves, but for the moment I'll give it a grade based on all the set up and, depending on how "Flesh and Stone" turns out next week, I'll award it a second grade to indicate how the two-parter works as a whole.