A storm rages without, and within. 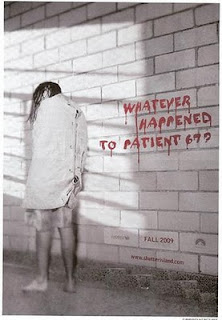 When the novel Shutter Island was released in 2003, it was the follow-up to Dennis Lehane's bestselling and acclaimed novel, Mystic River. Considering the dark and disturbing content of his previous work (sexual abuse, child murder, and the burden of survivor guilt), it's easy to see Shutter Island as a palette cleanser for Lehane, who was able to indulge his love of Gothic fiction, pulp and 50's B-movies in his story of two Federal Marshals sent to uncover the mystery behind the disappearance of a patient from a mental institute on a remote island. As far as tonal shifts go, it's pretty marked.

In that respect, the film version attains an intertextual symbiosis with its source material through its director, Martin Scorsese. As in the case of Lehane, Shutter Island appears after a period in Scorsese's career in which he has been dealing mainly in "serious" things. The past decade has seen him tackle the violent birth of America (Gangs of New York), the history and madness of Hollywood (The Aviator) and the lives and art of giants of popular culture (No Direction Home and Shine A Light). Having finally won a long-delayed and much deserved Oscar for The Departed, Scorsese seems to have reached a point where he is yearning for a chance to let his considerable talents loose on something that is more pulp than prestige. What results is a film that is by turns creepy and creaky, disturbing and silly, and consummately entertaining.

Leonardo DiCaprio and Mark Ruffalo are the marshals dispatched to Ashecliffe Asylum on Shutter Island to investigate the disappearance of Emily Mortimer, who vanished from her cell as if, in the words of avuncular doctor Ben Kingsley, she "evaporated through the walls." (Or did she?)Things are not what they seem, however. No one on the island seems that concerned about Mortimer's disappearance, and the doctors and guards seem intent on stonewalling DiCaprio and Ruffalo's attempts to find her. (Or are they?) Even DiCaprio isn't everything he appears to be; he's been investigating the hospital for years, and has become convinced that the patients are being used as guinea pigs in a series of experiments run by former Nazi Max von Sydow. (Or are they?)

Scorsese and his cast take the ripe premise and run full pelt with it. Nothing is too big or too bold. We get flashbacks of DiCaprio helping to liberate Dachau, dream sequences in which his dead wife gives him clues that could solve the mystery and warnings that he may be in danger, and harrowing scenes in which DiCaprio walks through a darkened ward after a power cut, lighting match after match as maniacs cackle and scream in the darkness. Scorsese creates an atmosphere of dread and confusion that is beautifully sustained throughout. Every twist and turn in the plot only raises more questions, until we and DiCaprio are trapped in a web of lies, half-truths and delusions, waiting for the film to tell us what is going on. And when it does, Scorsese delivers up a scene of quiet intensity in which three people talking holds more tension and dread than any of the cheaper shocks that he employs elsewhere.

As Teddy Daniels, the tragic and obsessed marshal on a mission, Leonardo DiCaprio gives one of the best performances of his career. From the very first scene, in which we see him emptying his stomach on the ferry to Shutter Island, he radiates a jittery energy that only grows more and more intense as the story gets stranger. By the end, I was wondering if he would reach a pitch of nervous vibration so high that he'd just fly off the island. He's perfect as a man seeking a truth that he fervently believes in, regardless of whether or not it actually exists. He is ably supported by Ruffalo, whose affability barely masks an awkwardness that verges on the suspicious, Ben Kingsley, who delights in his chance to deliver daft dialogue, and Max von Sydow, who is effortlessly intimidating as the possible-Nazi head of the institution.

It may not be one of Scorsese's significant works, but as far as B-movie pastiches go, it's a hell of a ride. By combining the muscular directing of his best work with the paranoiac atmosphere of Invasion of the Bodysnatchers, he offers up a film that is just fun to experience. Even if you figure out the secret early on, which it's entirely possible to do, it's such a joy to watch a master of his craft having so much fun.
By Edwin Davies
Labels: film review
Newer Post Older Post Home