Narcissism triumphs when good men do nothing. 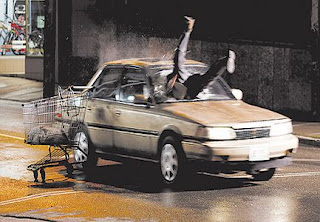 Stuart Gordon (director of Re-Animator, a film of which I am a big fan) brings us this harrowing tale "inspired by true events" in which a newly homeless man (Stephen Rea) is run over by a nursing home worker (Mena Suvari) and becomes lodged in her windscreen. Drunk and bewildered, Suvari drives home with Rea dangling out of the front of her car, only to discover that he is still alive. Afraid that running over someone whilst drunk and high could cost her a promotion, Suvari leaves Rea stuck in windscreen whilst she tries to think of a solution to her problem.

Stuck is part thriller, part social commentary, and it does both very well. The scenes of Rea trying to extricate himself from the car, pulling bits of glass and metal from his body, are - quite literally - visceral, delivered in a straightforward, uncomfortably realistic fashion that had me squirming in my seat very often. It helps that the film goes to great lengths to establish that Rea's character is a good guy down on his luck, and because he is so sympathetic, his situation becomes all the more horrific. Suvari is also very convincing as a woman who, in her stress- and drug-addled state, comes to believe that it is all somehow Rea's fault, that it is he who is ruining her life, and makes her decision to not help Rea, and to eventually harm him, very plausible. She is clearly the villain of the film, but she manages to avoid being a complete demon until 20 minutes from the end.

At its heart, the film is about the way in which society, both on a large and small scale, fails those who slip through the cracks. Before Rea and Suvari's worlds collide, we are shown Rea being kicked out of his apartment because, after being laid off, he can no longer pay his rent. After a confrontation with his landlord in which he only just manages to get away with his clothes and nothing else, he goes to an employment agency for a job interview. However, because a clerical error prevents the interviewer from finding Rea in the system, he sends him away to fill out a form he has already filled, to get the interview that he has already been given. Finally, whilst sleeping on a bench, a policeman tells him to leave, essentially sending him to get run over.

In each of these situations, Rea is told that he has a choice, but it's clear that he has no choice at all. Move out, or I'll call the police. It's your choice. Follow the procedures, and we'll work with you, or don't. It's your choice. You can go to the mission, or I can arrest you. It's your choice. Rea has been forsaken by those who control his life, from the company that laid him off to the authority figures who refuse to help him, and it's these forces that bring him to that fateful street.

On a smaller scale, people repeatedly fail Rea by refusing to help him because they are too obsessed with their own problems. Suvari, obviously, won't help him because she blames him for potentially ruining her career, but relatively nice characters, such as an Hispanic family who find Rea, but decide not to help for fear that the police would ask too many questions, also fail him because they don't think it's any of their concern. Nowhere is this idea more clearly demonstrated than a scene in which Suvari discovers that her drug dealer boyfriend (Russell Hashidy) has been cheating on her. Suvari becomes so angry that she completely forgets that there is a man in her garage slowly bleeding to death. It's callous to an insane degree, but it's only the most extreme example of an attitude that the film considers endemic.

The satirical aspects of the film are incredibly heavy-handed at times, and can overshadow the genuine drama of Rea trying to escape. Just after the accident happens, we see Suvari drive her car right past a group of policemen who fail to see her because they are dealing with a bum, and refuse to listen to him when he tells them to look around. The scene ends with the bum saying, "You didn't even look." Later, Hashidy and Suvari are about to have sex, and to allay Suvari's fears about her accident, Hashidy says that no one will care if she killed a bum, that anyone could get away with anything, "just look at who's in the White House." It's a throwaway line in a silly sex scene in an exploitative movie, but that very same context renders lines like that all the more clunky, especially since the film manages such a good blend of suspense and commentary elsewhere.

The film is at its best when it is focusing on Rea trying desperately to effect his escape - whether by lifting his shattered body off a windshield wiper that has pieced his side in order to reach a mobile phone, or banging his hand against the horn of the car - so the moments when it becomes more action-orientated shatter the veneer of plausibility that the film hides behind the rest of the time, but the contrivances further the intellectual thrust of the film without completely destroying the suspense and the drama.
By Edwin Davies
Labels: film review
Newer Post Older Post Home