There were two problems. One of them was Kinski. 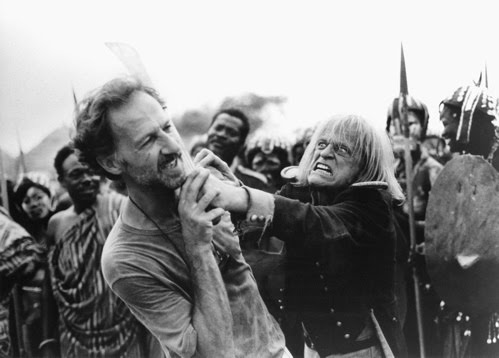 Between 1972 and 1987, German director Werner Herzog made five films with Klaus Kinski, an actor whose incendiary, wide-eyed on-screen performances were matched only by the violence of his off-screen tirades. The two men produced some of the most striking and indelible images in the history of cinema, yet they were often (quite literally) at each others' throats, and their collaborations were fraught with tension.


Kinski died in 1991, just four years after the two made their final film together, Cobra Verde. The documentary film My Best Fiend is Herzog's attempt to explain his complicated relationship with Kinski and figure out just what is was that drew them together, even though they always seemed as intent on killing each other as they were on making films.

It's important to note that this is not a documentary about Klaus Kinski or Werner Herzog: It's a personal exploration of the passion that drove them. It does not attempt to explain who they were before they started working together on Aguirre, the Wrath of God, what they did on their own, or what they did after their collaboration ended with Cobra Verde. In short, anyone looking for a primer on the work of either man will be disappointed.

Herzog, who narrates, doesn't explain the plots, or even give away too much detail about the productions of their five films. Instead, he lets the footage of Kinski's unhinged performances and back-stage 'raves' show us what it was like to work with him. By giving us an inkling of what Kinski was like, but without burdening us with technical details, Herzog creates a sense of what the atmosphere was like on his films, the tension between Kinski and pretty much everyone else, and the sense of awe he inspired in those who witnessed this tornado of a man.

The behind-the-scenes footage of Kinski and Herzog working together is almost indistinguishable from the clips from the films themselves. This is partly because all the footage was shot on film, and because both sets of footage share the same loose, organic feel of most of Herzog's work, but it's also because of Kinski, his madness and his magnetism. In real-life, Kinski had the same animalistic energy that his best performances thrived on, but completely without restraint. We are given access to Kinski's rants at Herzog and other members of the crew; exquisite, explosive screaming fits that would go on for hours at a time, leaving Kinski exhausted and everyone around him terrified. (Herzog exploited these rages repeatedly, letting Kinski tire himself out so that his performances would be quieter than he wanted them to be.) He embodies many of the characters that Herzog had him play; an obsessive striving for something profound at the expense of all else.

The central question anyone watching the film will ask themselves is, "If they hated each other so much, why did they keep working together?" The answer is in the title. Yes, at times they hated each other to the point of violence and murder. Famously, Herzog threatened to shoot Kinski if he left Aguirre before shooting finished, and (somewhat less famously) Herzog tried to firebomb Kinski's house - he was prevented from doing so only by Kinski's Alsatian. Yet there was also a deal of affection between the two men. When Herzog talks about Kinski, whether on his own or interviewing others, his voice is filled with respect for his erstwhile muse. There are scenes of the two men at a film festival, joking around and hugging, that indicate a friendship that was deeper than their creative squabbles. Though they were nemeses, they were creatively simpatico in ways that defy explanation.

Like many of Herzog's best films, My Best Fiend touches upon something profound in a way which is almost guileless. Herzog freely admits that his affection for Kinski comes as much from watching footage of them having fun together as from his actual memories, and that the positive memories take the greater precedence in his mind. Even if the stories of threats, intimidation and screaming are the most striking, the one that matters is of Kinski with a butterfly on his face, delighting in the sheer joy of being alive. We all want to remember the best parts of people, even the ones we contemplate killing. Much like Kinski, it's an idea that is thoroughly insane and hauntingly beautiful.
By Edwin Davies
Labels: film review
Newer Post Older Post Home