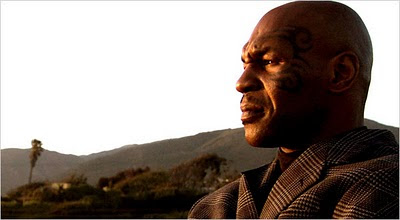 James Toback's documentary about Mike Tyson is two-parts revealing insight and brutal honesty to one-part fevered revisionism. By stringing together hours of interviews with Tyson - in a style reminiscent of Errol Morris' exemplary The Fog of War - to create one, almost unbroken monologue Toback creates the image of a tragic figure undone by his own hubris and the complete lack of scruples of those around him.

In Toback's version of him, Tyson was serendipitously plucked out of a Brooklyn ghetto following an arrest which put him in touch with some boxing trainers, and who was then thrust onto the world stage at a young age. Then once his mentor Cus d'Amato died, leaving him with no guiding hand or moral centre, he began to spin wildly put of control, allowing himself to be manipulated by managers and promoters who took his money and didn't care when he got out of control.

The impression the film gives of Mike Tyson, and the impression he gives of himself, is that of a sentient bulldog. The sort of dog who is abused by its owners until it breaks its leash and mauls someone with no comprehension of its own actions. It's not hard to see why he has fascinated people for the better part of three decades since he's a pile of contradictions; He's a pugilist with a strange lyricism to his speech, a man who could probably kill you with a single punch but whose voice is comically high-pitched and childish, a man who believes himself to be completely moral who has also done some truly reprehensible things.

Toback plays up these contradictions through his use of split-screen; He will focus on Tyson from one angle saying one thing, then he'll overlay a different interview on top of the original, then another on top of that. This, combined with the often jarring way in which the interviews are cut together, create the impression of a man whose head is filled with many different voices talking at cross purposes. It's a simple but effective technique that nimbly allows the film to create a sense of what it must be like to be in Mike Tyson's head.

The central problem with the film, though, is that whilst Tyson seems to be filled with genuine remorse about what he became - going from a young man who found escape in boxing to a sociopath who lost all love for the sport - the film tries very hard not to apologise for the things he did. Toback clearly has a personal friendship and fascination with Tyson - he cast Tyson as himself in two of his dramatic films, When Will I Be Loved and Black and White - which must have helped in getting such access to him, but when it comes time to discuss the darker side of Tyson's life and persona, Toback blinks and tries to obfuscate the issue.

Tellingly, the rape of Desiree Washington is discussed by juxtaposing footage of Washington acting flirtatiously with Tyson whilst he describes her as a "wretched, filthy excuse of a woman." Too often the film whitewashes parts of Tyson's past (and his possible future, which is summed up with a disgustingly upbeat happy ending), creating a one-sided hagiography that undercuts the fascinating moments when Tyson talks openly about what it was like to be at the top of the world, and what it was like to lose it all.

Whilst it can be frustratingly disingenuous, for the most part Tyson is a fascinating window into the mind of a monstrous figure. Ultimately the film's message seems to be that whilst we can judge him, we may never understand him, and anyone going into the film will probably not come out with their perspective drastically changed. Still, you may gain some insight into what the maelstrom looks like from the eye of the storm.
By Edwin Davies
Labels: film review
Newer Post Older Post Home