You mean I'm not even a quarter of the boy my brother was? 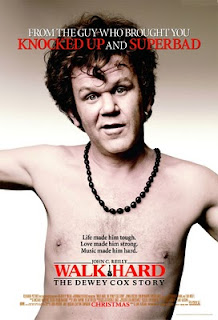 As Walk Hard: The Dewey Cox Story begins, a runner is trying to find the titular Cox, (John C. Reilly) a legendary country musician, so that he can go on-stage. Finding him standing alone, leaning on a wall, the runner is told to leave Dewey alone, because he has to remember his entire life before he plays. It's at this point that the film unfolds as an extended flashback, taking us back to Dewey's Depression-era childhood, which was marred by tragedy when Dewey accidentally cut his more talented brother in half during an ill-fated machete fight, through his success in the 50s and 60s, and eventual drug and relationship problems.

Right off the bat, the film associates itself with the Johnny Cash biopic, Walk The Line. Not in order to humourlessly replay scenes from that film, a la Epic Movie, but because director Jake Kasdan and co-writer Judd Apatow use Walk The Line to highlight the cliches of the music biopic genre in general; a tragic childhood, battles with drug addiction, infidelity, a last minute redemption, these are all standard aspects of biopics, and Kasdan and Apatow use the blueprint of Walk The Line to highlight their foibles.

On top of the ridiculous dialogue and characterisation - Dewey's first wife, played by Kristen Wiig, repeatedly tells him that he will never succeed, even after he's had several number one records, and his father constantly tells Dewey that "The wrong kid died!", regardless of any other circumstance - the film-makers add an extra layer of irony to proceedings by making the film look gorgeous. At the risk of falling foul of that old cliche about praising a comedy for its production design probably means the film isn't all that funny, Walk Hard is a seriously good-looking film. The entire production has the sheen of an Oscar contender, and the level of detail and care that has gone into making it look just right contrasts nicely with the silly one-liners and puerile jokes.

And in casting John C. Reilly, a man who has appeared in both crowd-pleasing comedies and Oscar-worthy fare, the film gets someone who can reconcile both aspects of its humour. He gives a completely committed performance that makes Dewey feel like both a real character with genuine pain and a completely silly caricature. In the middle of a fight with his wife, Reilly can say lines like "Edith I told you I can't build your candy house! It will fall apart, the sun will melt the candy, it won't work!" with a deadly seriousness that is far, far funnier than an intentionally wacky delivery. It helps that he can also sing the film's songs, which are all pitch-perfect musical parodies that make for lovely compositions on their own. Walk Hard is at its best when it mixes the ridiculous with the sublime.

However, for all the good of the film there is a paradox at its heart that is never comfortably resolved; it links itself overtly to a specific film, yet it aims to be a satire on a entire genre. Whilst the first half draws primarily on Walk The Line, its second half adopts a more scatter-shot approach. There's an internal consistency to the start that comes from being based on a single source, and that consistency makes the jokes about the cliched nature of biopics all the sharper. Once you have scenes of Dewey meeting the Beatles, as a Brian Wilson surrogate conducting a psychedelic jam, and holding a press conference looking and acting like Bob Dylan circa Don't Look Back, (Reporter: What do your parents think about your protest songs? Dewey: What do your parents think about my protest songs?) that consistency disappears. It's still funny, but it all seems so toothless.

Incidentally, as someone who has always maintained a healthy skepticism regarding the genius and cult of Bob Dylan, the moment in which one character asks what a song with the lyrics "The mouse with the overbite explained/how the rabbits were ensnared" is about, whilst another argues that the song is "very deep", amused me a great deal.

Whilst it never quite matches the comedic heights of its opening half, Walk Hard is a superior spoof in an age when they are few and far between. The love and attention that has clearly gone into the film does much to compensate for its comedic shortcomings, though it does not quite redeem its drop-off halfway through.