The Princess and the Frog

Louis: You sure this is the right blind voodoo lady who lives in the boat in the tree in the bayou?
Ray: Pretty sure. 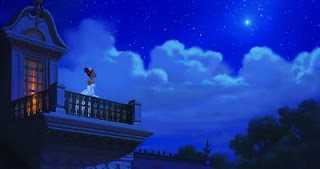 I grew up during the American Animation Renaissance of the 1980's and 90's and I clearly remember the sheer joy and excitement I felt every time a new Disney animated film was released. Trips to the cinema to see films like Beauty and the Beast - the first film I ever saw in a cinema -, Aladdin and the Lion King were almost holy experiences for me growing up. That same childish sense of wonder came over me as I sat down to watch Disney's return to hand-drawn animation, The Princess and the Frog.

I mention all of this so that you will know just how strongly I feel about these films. Please keep my love of Disney in mind when reading this review, not because it blinds me to the flaws of the film, but because I hold the films to which The Princess and the Frog aspires in very high regard and I went in with very high expectations. Despite those expectations, I came away feeling giddy and joyous. It's almost too good to be true. Like a fairytale, in fact.

Enough dewy-eyed reminiscing, to the plot.

The princess of the title is not a princess at all, but a poor working class black woman named Tiana. (Voiced by Aniki Noni Rose.) Tiana is a poor waitress in New Orleans during the Jazz Age, and has worked all her life to fulfill her late father's dream of opening a restaurant. Her dream seems on the brink of falling apart when she learns that she has been outbid, and she's in need of a miracle.

Whilst wishing on a star, of course, Tiana spies a frog. Asking the frog if he wants a kiss, he replies "Kissing would be nice". No, this is no mere frog, this is Prince Naveen (Voiced by Bruno Campos.), a philandering young fellow who has been turned into a frog by a local voodoo man (Voiced with gusto by Keith David.) who plans to use the stolen form of Naveen to make himself very wealthy. Tiana and Naveen strike a deal: Tiana will kiss Naveen, in doing so turning him back, and Naveen will give Tiana the money she needs to buy her restaurant. Things don't go according to plan, though, since the kiss turns Tiana into a frog as well, and the two find themselves lost in the bayou as they try to break the curse, aided by a firefly who is in love with the moon (Yes, really.) and an alligator who just wants to play trumpet in a jazz band.

The worst thing that could be said The Princess and the Frog is that it doesn't stretch the animated musical beyond what has been done before. Watching it is like watching a potted history of Disney animation: Evil wizard. Check. Bickering male/female leads who start out hating each other then fall in love. Check. The guarantee of a song and dance number every few minutes. Check . To denounce it for that is to miss the point - it's a big, glorious celebration of an artform that Disney excelled at in the past and, on the basis of The Princess and the Frog, still excel at.

The script, written by co-directors Ron Clements and John Musker, is incredibly funny. There's plenty of delightful sight gags, witty spins on traditional Disney tropes, a sincerity to it that, like the best of Disney, pulls at the heartstrings without tearing them out and enough moments of darkness to scare kids. The relationship between Tiana and Naveen has just the right level of prickliness to add friction to their scenes, but not so much that their eventual romance feels forced, and the sentimentality is never allowed to trample the gags or the songs.

Having said that The Princess and The Frog doesn't reinvent the animated musical, it does slip a few little surprises in: The music, rather than being inspired by pop or classical music, is largely gospel and jazz-derived, giving it a different feel to previous Disney outings. Randy Newman's score and original songs create a rich aural texture to match the beautiful hand-drawn animation.

Time will tell whether or not this will usher in Disney's third golden age or go down as John Lasseter's folly, but let's forget history for a moment and appreciate how magical it is to see a film like this being made. Anyone who grew up with Disney will fall in love with The Princess and The Frog. I know I did.
By Edwin Davies
Labels: animation, cartoon, Disney, film review, John Lasseter, musical, Pixar, The Princess and The Frog
Newer Post Older Post Home