Dear Zachary: A Letter to a Son About His Father

A tribute to those lost, and to those left behind. 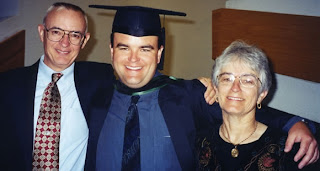 In the interesting but slapdash documentary Manufacturing Dissent, the great Albert Maysles says that one of the basic tenets of making a documentary is affection, or at least sympathy for the subject, since only those emotions can force a film-maker to depict their subject as they truly are. I can think of few films that exemplify that idea better than Kurt Kuenne's documentary Dear Zachary.

On November 5, 2001, Dr. Andrew Bagby was shot five times at point blank range by his ex-girlfriend, Dr. Shirley Turner. He was killed more or less instantly, and was discovered the next day. Despite being the prime suspect in the murder, Turner was able to travel to Canada, where she fought against being extradited to the United States. It's a sad, sad tale of hate and malice.

That is far from the end of the story, though. Whilst awaiting trial in Canada, Turner revealed that she was four months pregnant with Andrew Bagby's child. Realising that this last remnant of Andrew would never know his father, Kurt Kuenne - who had grown up with Andrew and whose first films had starred Andrew - set out to interview the people who had known Andrew in life, his friends, family and co-workers, so that he could then assemble all the footage into a tape for the newborn child, Zachary. He hoped that by making one more film with Andrew, he would keep some part of Andrew alive and show Zachary who his father was.

Starting out as a touching tribute to a good man who died senselessly and tragically, Dear Zachary gradually opens up into a much grander, but no less personal film. Kuenne's love for Andrew shines through in his editing: he creates a portrait of a man who was loved by pretty much everyone he met, who dedicated his life to treating others and trying to do good in the world. The many interviews that make up the film give us a real sense of who Andrew was, how his background shaped him and what he meant to the people he loved and who loved him. As the film progresses, though, another emotion starts to shape the narrative: anger.

As Kuenne conducted his interviews, Andrews' parents David and Kathleen were in Canada, fighting for custody of their still unborn grandchild. Kuenne documents their trials and tribulations with a force and emotion that is equal to the tender affection with which he describes Andrew. As the Canadian justice system repeatedly fails the Bagbys, first by allowing Shirley Turner to walk free, and then by repeatedly stopping them from getting custody of Zachary. Their frustration - as well as Kuenne's - is expressed visibly and vocally. At several points throughout the film, David Bagby rails against the woman that killed his son and the system that failed to acknowledge that fact. They are moments of explosive, raw emotion that are heartbreaking to watch, and the sort of unchecked outbursts that a documentary made by someone more removed from the story might have left out.

Kurt Kuenne's presence is felt in every frame of the film. As well as being director, editor and composer, he also narrates the entire film. His breathless voiceover unites the disparate elements of a story which is by turns a haunting biography, a compelling true crime story, and a complex, involving legal drama. Kuenne never tries to hide his feelings about the subject - at one point he is so overcome with emotion that his voice breaks and he has to start a line again - and whilst there is a certain manipulative aspect to his choices that only becomes apparent at the end, you never doubt that you are watching someone working out their pain, rage and grief on screen in the most beautiful and heartbreaking way.

I have been deliberately vague throughout this review about the film since there are things about it which I would not want to divulge, because to do so would remove much of their power. The story twists and turns throughout in ways shocking and gutwrenching, and to reveal them would be to deprive the film of much of its unexpected power. All I will say is that it's an intimate and provocative film that has stayed with me far longer than most. It's one of the best documentaries, nay, best films I've ever seen.
By Edwin Davies
Labels: Dear Zachary, film review, murder
Newer Post Older Post Home