Up In The Air

A bout of heavy turbulence would probably be preferable to an existential crisis. 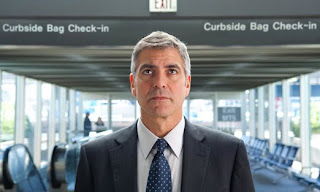 Ryan Bingham (George Clooney) is a man who is always on the move. Bingham is a corporate downsizer; he is hired by companies to fire their employees because "people will do crazy shit" when they lose their jobs, and bringing in a third party to carry out the termination seems the safest option. Ryan spends the majority of his time in airplanes, airports or hotels, rather than the apartment that he owns in Omaha, Nebraska, where his office is actually based.

His no commitment, no responsibilities lifestyle is put under threat by the arrival of two women in his life; Alex (Vera Farmiga), who shares Ryan's traveling life and as such is able to form a connection with him, and Natalie (Anna Kendrick), a young ambitious woman who is trying to institute a 'new media' termination process at his company. This would allow Ryan and his ilk to stay at home and fire people over the internet. Ryan believes that this would take away the aspects of the job which he considers noble, as noble as being a corporate downsizer-for-hire can be, and he and Natalie go out on the road so that she will be able to see what the job really entails.

I really liked Jason Reitman's two previous films, Thank You For Smoking and Juno, and Up In The Air combines the best elements of those films to deliver his most mature work to date. The film mixes the caustic, biting humour that typifies Thank You For Smoking with the well-formed relationships and emotional arcs of Juno. (Though without the occasionally grating Diablo Cody dialogue.) Much of the humour derives from Clooney's laconic voiceover (which starts off as the dominant voice of the film but which slowly fades out as the story takes hold) and its delivery of Bingham's philosophy, a misanthropic creed that sees all human relationships as excess baggage and values 'freedom', even if that freedom results in an existence of complete emptiness, and an obsession with loyalty schemes and minutaie over actual people.

Considering that it is a story about people traveling in planes, the film is solidly grounded by the dynamics of the characters. The development of Ryan's relationship with Alex feels very natural, largely due to the undeniable chemistry between Clooney and Farmiga but also because the writing makes it seem possible that these two characters could actually happen. The growing attraction between them, starting from a shared isolation and blossoming into a genuine connection, feels very real and makes for some of the film's most touching and warmly funny moments.

The key dynamic in the film, though, is that between Ryan and Natalie, since they spend the most time with each other. It is Ryan's exposure to Natalie's optimism and belief in love, even after she is unceremoniously dumped by her fiancee halfway through the film, that brings him to question his very existence and the meaning of his life. Plus, their sparkling exchanges result in the film's biggest laughs. Reitman make good use of natural Clooney's timing by contrasting it with Kendricks ability to deliver unintentionally biting dialogue in a believably naive way,

Clooney is just marvelous. With his customary charm turned up to 11 and his greying temples, he really does resemble the modern-day Cary Grant that he has so often been called. The way he defuses possibly tense situations, such as firing an employee played by Reitman favourite J.K. Simmons, is effortlessly cool. But it's his vulnerability that is most important to the film as a whole. Beneath the veneer of cool and platitudes you get a real sense that this is a man who has always been in control of his life facing a life-changing series of events. Clooney's performance perfectly captures the essence of someone trying to stay cool in the face of change, and without his steadying presence the film would not work.