Out of the Blue

A bolt from the blue. 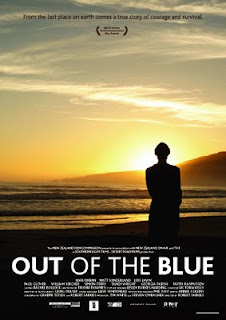 If you went in to Out of the Blue not knowing anything about it, you could be forgiven for thinking it was a completely different film to what it is. Based on the first twenty minutes, the film seems like a quaint comedy-drama about the people living in a New Zealand town. It's only once local 'eccentric' David Gray (Matthew Sunderland) starts sighting people up with an automatic rifle, then murders a family in cold blood, that the film reveals itself for what it is.

Based on the real-life Aramoana Massacre, which took place on November 13th and 14th 1990, and saw Gray kill 13 people, wound three others and commit the deadliest shooting in New Zealand history, Out of the Blue is a tense and chilling docudrama that recreates the horror of violence breaking out in the sort of place no-one expects these things to happen, but in which they often do. The progression of the film from its bucolic opening, in which director Robert Sarkies lovingly details the charming routines of Aramoana's residents, to the chaos of Gray's killing spree which, with its burning buildings and oppressive darkness, resembles nothing short of Hell on Earth, is perfect. It captures a genuine sense that this group of ordinary people are experiencing something so terrible as to be beyond their comprehension.

What raises Sarkies' film from being merely a top-notch thriller - though that's no mean feat in itself - is his grasp of character. Rather than delivering on the immediacy suggested by the title, Sarkies spends the first twenty minutes of the film introducing us to the townfolk whose peace is about to be so explosively shattered. Amongst them are the local policemen, played by Karl Urban and William Kircher, a couple who decide to move in with each other (Simon Ferry and Tandi Wight), and an old woman whose son has come to visit (Lois Lawn). Showing the gentle humour and wit of the people, as well as what will soon be lost, raises the stakes much higher than if the film had leapt right to the shooting. It also helps that Sarkies has gathered together a large, talented cast who all inhabit their roles completely, particularly Karl Urban, who is hugely convincing as a man trying to keep it together when confronted with something he could never have prepared for, and Matthew Sunderland is terrifying as the inscrutable murderer.

Lois Lawn steals the film, though, as Helen Dickson, an old woman who tries to save a man after he is wounded by Gray at the start of his spree. Despite having recently had hip surgery, Helen crawls to her house to phone the police, dryly saying that she might be a while, then crawls back to comfort the injured man, before finally holing up in her house. Lawn plays Helen with grace, wit and charm, and I found myself becoming incredibly protective of her as the body count started to mount.

Like United 93 and Elephant, Out of the Blue is more concerned with depiction than explanation. Outside of a few scenes in which we see Gray shouting at a clerk in a bank and sitting in his house, remembering a visit from the police concerning a peeping tom incident, we never get a sense of why he does what he does, only how, which makes the film ultimately more chilling. The matter of fact nature of Sarkies' unfussy direction and the lack of emotion on the part of Sunderland does much more to show us the unexpected nature of mass shootings than any number of trite speeches or psychological profiles.

This approach also makes the film unbearably tense. Shorn of typical thriller gloss, sequences in which Gray stalks the town, firing indiscriminately at innocent bystanders or playing a cat-and-mouse game with the police under cover of night are lent a reality that is shocking. Not only is it shocking, but the film itself feels like it is in shock: There's a deadened atmosphere to the whole film that suggests the feeling of having experienced something without being able to process it. Sarkies really makes you feel every impact and share the fear of the people as they run for their lives, or try to stay as still as possible until the danger passes. An old woman hiding under a blanket has never been so fraught with tension.
By Edwin Davies
Labels: drama, film review, Karl Urban, New Zealand, real life
Newer Post Older Post Home