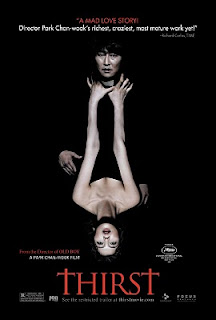 Vampire stories, with a few exceptions, are all about sex. From Count Dracula to Edward Cullen, the image of the vampire penetrating their victim with their teeth has been a simple and effective metaphor for sex, and the desire for blood a lusty stand-in for other earthly pleasures.

Thirst, the latest film by Park Chan-Wook, the South Korean auteur renowned for his violently poetic works, has a more literal take on the "Vampire/sex" concept. When a priest (Song Kang-Ho) is turned into a vampire after an experimental treatment for a deadly disease goes awry, he not only starts to lust after blood, but also his friend's wife (Kim Ok-bin). What then unfolds is a curious mix of horror, romance and Double Indemnity-style crime story, with a rich undercurrent of dark comedy and tragedy coursing through its veins.

Park's films have always resisted easy classification and, despite being part of an established and popular sub-genre, Thirst is no exception. Like all of his films, it manages to be several different, even contradictory things at the same time. To illustrate this, let's consider one of the most iconic images from the film; Priest Sang-hyeon drinking the blood of a comatose patient through an I.V. drip. This image is both inherently funny, since the act of feasting on a man's blood is equated to that of drinking a milkshake, but it's horrific for exactly the same reasons. The idea is also tragic because we know how good a man Sang-hyeon is and understand how far he has fallen.

The dramatic weight of the tragedy at the heart of the film stems from Song Kang-Ho's soulful performance as Sang-hyeon. From the moment we are introduced to this young idealist who is willing to sacrifice himself to help his fellow man we know that he is a good, decent man. The essential goodness never leaves him. Even when he is co-opted into helping a vampire he sired kill innocent people we still feel that he is a man who has not lost his faith or his soul. It's that central conflict between Sang-hyeon's good intentions and his evil actions that allows Park Chan-Wook to indulge his visual flair and let the plot meander; the film is always grounded by Sang-hyeon.

The meandering of the story is the greatest knock against the film. Though the film doesn't at any point bore, it does drag, particularly after the first hour and a half when the film enters a holding pattern as it prepares to reach its climax. However, once it enters the final act it recovers any lost momentum and ends on a moment of real beauty.
By Edwin Davies
Labels: film review
Newer Post Older Post Home