Things are going to be a little different around here... without Don. 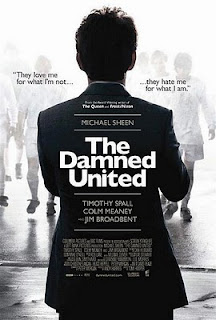 On the face of it, The Damned United doesn't seem like a story that would make for a compelling novel or an equally compelling film. Brian Clough (Michael Sheen) was one of the most talented and successful managers in the history of English football, whose prodigious talent and outspoken personality made him controversial and beloved. Why would someone make his infamous 44-day stint as the manager of Leeds United, the lowest ebb of his career, the focus of a story? Because David Peace knew when he wrote the novel that people are only at their purest when they are at their worst, and there was no purer distillation of Clough than when he floundered at Leeds.

The film jumps between two timelines; Clough's time at Leeds in 1974, and his time at Derby County from 1968 and going up until a few weeks before he took the job at Leeds. The two timelines serve to illustrate how Clough's career developed as a result of his obsession with Don Revie (Colm Meaney), the man who preceded him at Leeds. Revie casts a long shadow over the film; he only spends a handful of scenes with Clough and they barely exchange any lines but Clough is always thinking about him, trying to work out how he can beat him. And all the while his success feeds his ego, which feeds his further success, until he flies so high that he can only fall.

As Brian Clough, Sheen so dominates the film that it does run the risk of turning into a one-man show. None of the Leeds players feel all that real because they are featured so rarely, and even Don Revie, who is the closest the film has to a villain, is mostly seen on television screens. However, that is the point of the film; it doesn't need villains because the greatest threat to Clough is Clough himself. His ego and hubris are what ultimately lead to his downfall and he needs no help from anyone to destroy himself.

Everyone in the film is defined by their relationship to Clough, and if he doesn't care about them, then neither should we. That the only character of real substance besides Clough is his assistant manager, Peter Taylor (Timothy Spall), whose decision not to follow his friend to Leeds plays a major part in his downfall, supports this. Clough cares about Taylor, so we are given time to grow to care about him too. But at the end of the day, he is only as important as Clough considers him to be; as soon as they have a fall out, Taylor disappears and Clough is left to face the barbs and the spotlight and the failure all on his own.

A very human story about a man whose professional and personal lives are almost destroyed by his own obsessions, The Damned United is a fascinating character study that both fans and non-fans of football can enjoy.