He was dead...But he got better. 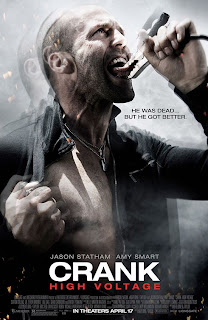 Crank, directed by Mark Neveldine and Brian Taylor, released in 2006 and starring Jason Statham as Chev Chelios, a hitman who is given a poison that will kill him if he doesn't keep his heartrate up (it's Speed, with a man!) was a bizarre delight that somehow got past the parts of my brain that make me hate stupid action films and hit me square in the part that makes me giggle like an idiot. Much of my enjoyment from the film stemmed from the fact that Crank was a deliciously knowing film that was aware of how silly it was and so felt no compunction to treat its ridiculous plot with even a cursory level of seriousness and instead focused its considerable energy on delivering a visceral and unhinged piece of cinematic silliness. Could the sequel possibly match the boundless energy and lunacy of the original? I'll let the plot synopsis answer that question.

When last we saw Chev Chelios, he had just fallen out a helicopter without a parachute, landed heavily on a car, and more or less died. However, as the film begins, Chelios is being kept alive so that the Triads can steal his indestructible heart (This is all true) as well as his other organs. To keep him alive, they replace his real heart with an artificial one with a limited battery life. When Chelios escapes from the Triads in order to get his "fucking pumper" back, he has to give his battery a jump every so often by any means necessary.

Yes, it is every bit as mad as that sounds. Buoyed by Statham's game performance, Neveldine/Taylor's frenetic direction and a script that veers between awful and brilliant at the drop of a hat, Crank: High Voltage matches its predecessor in many ways, and even brings some bizarre new tricks, but it also brings some unwanted subtext to the party.

Crank: High Voltage has been accused of being misogynistic. If anything, that is too light; it should be accused, tried and convicted of being misogynistic because it undoubtedly is. The scene in which a stripper is shot through the breasts and silicon bleeds out over her chest has been cited by many as an example of this, but the overall tone of the film and its portrayal of women is much more damning. Neveltine/Taylor display a commitment to portraying women as only strippers or whores that would make Frank Miller balk. Amy Smart, returning as Chelios' girlfriend Eve, is probably the best representation of femininity in the film, in that she does at least get to beat a man up, but even she is a stripper whose main role in the narrative is to have sex with Chelios on a racecourse. And Smart doesn't quite make up for Bai Ling, who plays a Chinese prostitute who is so incomprehensible and annoying that I, somewhat shamefully, found myself cheering when she was hit by a car. It's not just a film that seems to hate women, it is a film that somehow makes its audience hate women.
Yet for all its obvious sexism, it's hard to take the film seriously as a misogynist tract because it is so thoroughly ridiculous and the tone of the film is so over the top that the misogyny only really forms a part of the film's bizarre milieu. Crank was a pretty manic film, but High Voltage is downright certifiable. It takes the energy that drove the original, increases it to a dangerous level, then adds a dose of surrealism into the mix. Neveltine/Taylor seem to have reached a point where they suspect that someone, somewhere is going to realise that people as obviously insane as they are shouldn't be given $20 million to make a film and have decided to just completely go for broke this time around. So you get sequences in which Chelios, having been kicked into the control box of a power station, envisions a fight as a Godzilla-style battle between a giant version of himself - complete with distorted giant face - and a giant version of Johnny Vang, the man who stole his heart. As Fish Halman, the news reporter played by Star Trek: The Next Generation fave John de Lancie, says at the start of the film, "It can only be described as implausible".
The self-reflexivity of the film is also quite wonderfully odd. As the above quote from Halman (which is used in reference to the events of the first film) indicates, the film is well aware of its own ridiculousness. In the way that it constantly brings attention to how strange it is, and the way in which it repeatedly makes references to events in the first film in the most offhand and cavalier way, it's almost a parody of its predecessor and of itself. These are not always successful - one moment in which an old woman says that Chelios looks like the guy from the Transporter films is a painful and awkward moment of self-awareness - but for the most part they hit home and make the moments when High Voltage retreads the plot of the original feel fresh and new again.
The sheer giddy abandon that applied to the first film is very much in evidence the second time around but High Voltage runs out of juice about twenty minutes from the end. The opening hour is so frenetic that when it stops for just an instant it stops completely dead and, unlike Chev Chelios, it does not have the resilience to come back. For that first hour, though, it is one of the most glorious batty cinematic experiences out there. And my, is it out there.
By Edwin Davies
Labels: film review
Newer Post Older Post Home