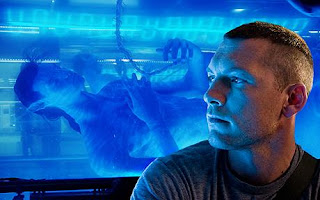 Comparisons are already being drawn between Avatar and Cameron's previous film, Titanic. This is understandable since it's the first film he has made in twelve years and the last film he made was (unadjusted for inflation) the highest grossing film at the U.S. box office. It's a lot to live up to. Though Avatar more readily fits in with his science fiction work since it examines similar themes as those, such as the relationship between man and technology, Titanic is probably the best comparison because of the romance at its centre and because, like Titanic, it only really gets good at the end when everyone starts to die.

Because for much of its running time, Avatar is a bit of a slog. Not an unenjoyable slog, but a slog nonetheless.

The main reason for this is the plot, which is predictable to the point of parody. Jake Sully (Sam Worthington) is a crippled ex-marine who, for reason both too complicated and too stupid to explain, is going to the world of Pandora to take his twin brother's place in the avatar project, in which he will be given control of a sort of mechanical-organic hybrid creature that resembles the 12-foot tall, blue Na'vi that populate the planet's surface. The aim of Grace Augustine (Sigourney Weaver), the project leader, is to better understand the Na'vi and study their world, whilst the aims of the company funding the project, represented by company man Giovanni Ribisi, and their military cohorts, represented by gloriously insane commander Stephen Lang, is to use Jake and his fellow avatars to open a line of communication with the Na'vi so that they can then force them to leave their homes and get at the rich deposits of unobtainium (what, did you just forget to come up with a fucking name, Jim?) that lie underneath the huge tree in which they live.

Things don't run quite to plan, though, as Jake is left alone and isolated when he is attacked by one of the many beasties that populate Pandora's lush forests and is saved by Neytiri (Zoe Saldana), a Na'vi who takes a shine to Jake and starts to show him the ways of the Na'vi.

Mark Kermode so perfectly described the experience of watching Avatar that I'm going to have to paraphrase him because I have not found a more apposite way of summing it up: it's akin to watching an ocean liner turning 360 degrees; it's impressive, but you can see where it's going and it takes such a long time to get there. You can see the plot points far in advance of them happening - you can see that Jake and Neytiri are going to fall in love, that he will be forced to choose between the Na'vi and his own people, and that it's all going to end in a bigass battle - and much of the running time is spent waiting for things to happen up to an hour after you've already figured out that they are going to happen.

Cameron, if we are being very, very charitable, could be described as an inelegant writer. It is telling that all the films of his which are remembered for their strong characters and plots (Terminator, Aliens) are the ones which he co-wrote, and the ones which are remembered for their predictable plots and paper-thin characterisations (Titanic) are the ones on which he has sole writing credit. Avatar falls very much into this latter category. The characters, apart from Lang's Colonel Miles Quaritch, who is simply fantastic, are all quite flat and forgettable, falling into well-worn stereotypes (the evil industrialist, the kind-but-firm scientist, the badass pilot) who spout reams of expositionary, cliched dialogue with only a modicum of effort. Admittedly, Sigourney Weaver acting with only a modicum of effort blows most other actors out of the water, but Sam Worthington just isn't charismatic enough to carry off his role. He's good, but you never get the sense that he is conflicted at any point, since he seems just as committed to helping the Na'vi as he does to destroying them and there is no sense of progression for his character. The only reason his decision to switch allegiances makes sense is because we know he's going to do it anyway.

I can understand why it is so simplistic, though, because Cameron is savvy enough to know that if you are going to introduce audiences to a new technology and world then you should couch it in easy, understandable terms. And what he brings to the table does need to be seen because it is quite stunning. Pandora is a thoroughly convincing world, full of bioluminescent plants, hideous yet fascinating monsters, and as we see Jake running through it or flying high above it it is easy to get lost in Pandora. It's just a shame that Cameron does as well, fetishising his own creation by staging endless shots of plants and animals, like a child showing off his drawings to a parent. "Look at the drawing I done!", he cries, to which the parent replies, "That's very nice, Jim, but why don't you attach it to a compelling narrative?"

Anyway, I don't want to be completely against the film because I wasn't bored at all during its entire running time, but I only really got involved when the action kicked in at the end and for the most part I didn't really care all that much. It is very, very pretty though.
By Edwin Davies
Labels: film review
Newer Post Older Post Home