Old man, look at my life/I'm a lot like you were 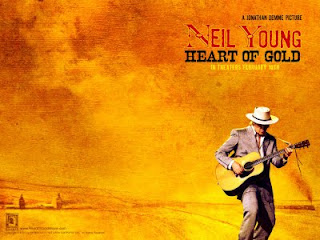 Jonathan Demme's film begins with a series of interviews with Neil Young and various members of his backing group (including the likes of Emmylou Harris) discussing how they met and the recording of his 2005 album, Prairie Wind. We learn that the album was written in the aftermath of the death of Young's father, the writer Scott Young, and that it was during the recording process that Young was diagnosed with, and treated for, a brain aneurysm. After this initial talk of what has been, we are told that Young and his band are on their way to the live premiere of Prairie Wind at the Ryman Auditorium in Nashville, Tennessee, and we then watch as Neil Young performs the album almost in its entirety and then follows it up with a set of old songs.

These initial interviews at first seem out of place in the film since they appear to set the film up as something else. Based on the beginning and its emphasis on talking about Young's career, I was expecting the film to be akin to Martin Scorsese's "The Last Waltz", in that it would mix together songs and documentary sequences to show the audience something about Young as an artist. However, after the interviews the film consists solely of the performance and that introduction then seemed out of place in what was otherwise a straight-forward concert film.

However, as the concert progressed and Young performed more and more songs from Prairie Wind, I realised that the opening was essential to the film since the tiny amount of context it gives to the performance lends the film a power and resonance that it would otherwise lack. Prairie Wind is an introspective album about someone looking back on their life and the people who are no longer in it, and knowing in advance that Young has both lost his father and been forced to face his own mortality in such close proximity to the concert causes every song to brim with life and sadness. It even adds to the old songs, as lyrics like the repeated refrain of "and I'm getting old" in 'Heart of Gold' are given an entirely different meaning being sung by a man in his 60s who has had a brush with death to when they were being sung by a healthy guy in his 20s.

Not that the film wouldn't have any power without the introduction, of course, because at its centre you still have Neil Young, a man who - on his best days - is just one of the most beautiful songwriters ever and is a scintillating live performer even in his 6th decade. That fine tenor, always so fragile yet so unshakable, still retains its power to cause the hair on your arms to rise and your soul to soar, and even when he occasionally struggles to hit the notes (something that happens on occasion in the second half of the concert) it's actually quite charming. He's supported by a group of friends that he loves dearly and is playing to a rapt audience, both in the theatre and at home.

Demme, as he did with Talking Heads on Stop Making Sense (for my money the single best concert film ever made), lets the music speak for itself, often allowing performances to unfold in long, unbroken takes, and resisting constant cutting or fancy camerawork in favour of direction that serves the performance entirely.

There is little in Heart of Gold to convert anyone who isn't already a fan of Neil Young. If you don't like country in general or Neil Young in particular, then this is not the film for you. However, it is not a film intended as an gateway for newcomers; it is unashamedly a love letter to one of the most prolific and influential figures of the last four decades of American music* and its intention is to display the man in full flow and delivering up a wonderful concert. It's a film that hits every note perfectly, even if Young himself occasionally doesn't.

*And yes, I know full well that he's actually Canadian, but he is a figure on the American music scene, a fact that is hammered home by the film's Nashville setting)
By Edwin Davies
Labels: film review
Newer Post Older Post Home