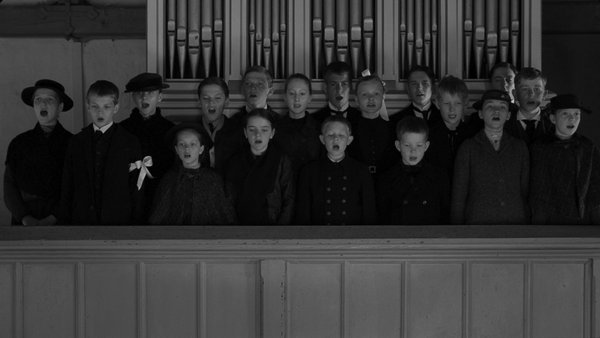 The village of Eichwald, in the year 1913, is a seemingly idyllic place in a seemingly idyllic time, home to good, honest German people who display good, honest German values. The children are well behaved, the people respect the class system and are happy to serve under the local Baron, and everyone goes to church. The village becomes uneasy, though, after the local Doctor suffers an accident that has every sign of being a deliberate attack, and subsequent bizarre incidents give the impression that someone, for some reason, is punishing the people of the village. But who is doing it, and why?

That mystery and its resolution are, ostensibly, the centre piece of Michael Haneke's Palme d'Or-winning film. However, much like his earlier film, Hidden, the mystery is not the point of the film. In fact, it's so thoroughly unimportant to the film that even the characters forget that there is a mystery for much of the running time. It is not so much the point of the film as it is the framework within which Haneke can explore his chosen theme to its fullest extent. The theme this time around is whether there was something already existent in the German psyche prior to World War One that foreshadowed the atrocities of the 20th Century.

Haneke has always struck me as more of an essayist than a dramatist, in that he is more concerned with making a point than telling a story, and in that vein it is fair to say that The White Ribbon is his most mature and fully realised essay to date. Using the villagers and their various relationships, Haneke - much like Jean Renoir in La Regle Du Jeu - creates a snapshot of a society on the precipice of a period of incomprehensible and irreversible change. Showing us how the characters interact with each other, whether with their friends, their social betters or within their own families, Haneke offers up a variety of possible explanations as to why the generation of children represented in the film would grow up to support Hitler and allow their country to be party to an epoch of brutality and violence.

Could sexual repression, demonstrated by the relationship between Martin (Leonard Proxauf) and his pastor father (Burghart Klaußner), have led to the sublimation of sexual desire until it could only be expressed through outbursts of violence or tacit approval of violence? Did the rigidity of the class structure and the willingess of people to tolerate small-scale acts of violence to maintain the status quo later find a fuller expression in the willingness of ordinary people to follow a forceful leader and tolerate large-scale acts of violence? What of the role of religion; is the refusal of the church to acknowledge possible goings on in the village reflective of the wider Church's refusal to condemn the acts of the Nazis?

These are just some of the possibilities that Haneke offers up but, crucially, he does not offer us any one clear conclusion, instead giving his audience the chance to reach their own conclusions from the material presented. His typically austere style - accentuated by beautiful, stark black and white photography - keeps us at a distance throughout, but rather than decrying our voyerusim (as he did in Funny Games) he actively wants us to observe. To observe, to judge, and to attempt to understand what it was about this society that made it so full of "malice...brutality, apathy...and perverse acts of revenge".

Yet for all this talk of the intellectual rigour of the film and its studied academic approach, The White Ribbon is almost certainly Haneke's warmest and most human film. Or at least his least overtly cruel film. For once, he provides us with a central character (Christian Friedel's schoolteacher, who both investigates the mystery as a young man and narrates ruefully about it from an unspecified point in the future) who remains likable throughout and even gets to take part in a surprisingly sweet and awkward love affair. Even outside of this relationship we see sparks of humanity amongst the film's wide and deep cast. Even within dynamics that are otherwise shown to be quite harsh, such as the pastor's family, we see displays of love and affection that are genuinely heartwarming and despite their clear, creeping unease about what is happening in the town, most of the people seem happy in their lives. Though this happiness could itself be part of the wider comment the film is trying to make; as long as people are happy, and no one causes too much of a fuss, they'll let anything happen.

Anyone going in hoping for a compelling and satisfying mystery will leave disappointed, since Haneke is clearly more interested in evoking a mood and a time than in sating our desire for mysteries with simple answers. The film follows this approach to a fault, reaching its intellectual climax 20 minutes before its narrative climax, which winds up feeling almost perfunctory and like more of a confirmation than a revelation. Then again, if the preceding meal is so rich, why quibble over the after dinner mints?
By Edwin Davies
Labels: drama, film, film review, Michael Haneke, Oscar, Oscar contender, Palme d'Or, The White Ribbon
Newer Post Older Post Home