We're going to be fine. 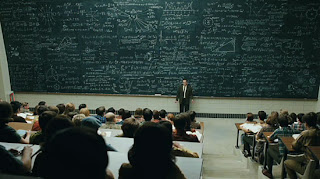 Larry Gopnik (Michael Stuhlbarg), a maths professor with a family and a good job, sees his entire life fall to pieces around him as first his wife (Sari Lennick) seeks a divorce so that she can marry one of Larry's best friends (Fred Melamed), then he discovers that someone has been sending letters to his University to try to dissuade a review board from offering him tenure, and his brother (Richard Kind), who may very well be some sort of Maths genius, is, when he isn't sleeping on Larry's couch, constantly in his bathroom draining his sebaceous cyst. Amidst his trials, he seeks spiritual guidance from a number of Rabbis, each of which offers him some advice, but none of which seems particularly useful.

The Coen Brothers' latest has been compared to their earlier film, Barton Fink, and it's easy to see where the parallels can be drawn. Both have Jewish protagonists, both examine a particular time and subset (1930s Hollywood versus 1960s suburbia) and both focus on individuals whose existence slowly comes to represent their own personal hell (albeit in a far more literal sense in Barton Fink). As with that earlier film, there is a certain misanthropic glee inherent in seeing Larry failing to comprehend what is happening to him. The comedy of the film - and it is, despite all appearances to the contrary, a comedy - is bleak, bleak stuff. It's a film about family, faith and spirituality in which all three are revealed to be hollow and unsupportive as each in turn fails Larry. It is very much in keeping with the Coens recent output in that it is nihilistic veering on malevolent. It may even be darker than anything they've ever done since all the terrible things that happen do so to someone who is completely undeserving of them.

The main point of comparison between A Serious Man and Barton Fink, from my perspective, is that both are, to a degree, inscrutable, and this inscrutability is what makes them so fascinating. Throughout its running time, A Serious Man sets up a number of running themes and sub-plots, some of which are explored, and others which aren't. Which are and which aren't is not really important, yet it is absolutely vital. The film is about the malaise of Larry's life and the stasis that he has reached. His repeated refrain of "But I haven't done anything", is both a plea and an accusation. He may have not done anything to get himself into this situation, but neither is he prepared to do anything to get himself out of it. The sub-plots that the film establishes are vital in showing us how thoroughly inert Larry is and how his community, rather than supporting him, has incarcerated him.

Larry is, by all accounts, a good man who tries to do right by everyone, but he's also a man who is good kind of by default since, although he never does anything bad, he never does anything particularly good, either. He is content to coast along and his inability to act when confronted with an array of personal and professional crises is indicative of his general stasis in life. Michael Stuhlbarg is great as Larry; he's able to perfectly capture the essence of a man who is trying his hardest to make sense of his life and who is completely failing to, making his frustration at life in general palpable. Though he is outshone by Fred Melamed as Sy Ableman, Larry's softly-spoken adulterous friend, It is Stuhlbarg who shoulders the weight of the film (and, seemingly, the world).

I don't think I've got the full measure of the film after a single viewing, but I've not stopped thinking about it since I watched it, which is a recommendation, of sorts.
By Edwin Davies
Labels: film review
Newer Post Older Post Home