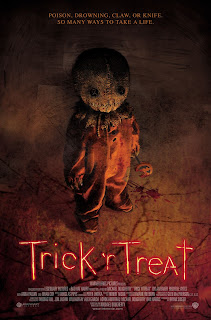 Michael Dougherty, who is perhaps most famous for being one of the co-writers of X2 and Superman Returns, wrote and directed this homage to EC Comics and Halloween in general back in 2007, only for Warner Bros. to sit on it and stop it from being released for well over two years, despite the film being very well liked by pretty much everyone who was given the chance to see it. It's finally limping its way onto DVD this month but I was fortunate enough to catch it on the big screen as part of the Celluloid Screams Festival in Sheffield.

Essentially an anthology film in the vein of the George A. Romero/Stephen King collaboration Creepshow, it tells us five horror stories that all take place in one town on Halloween night; a young woman (Leslie Bibb) finds herself attacked when she takes down Halloween decorations early; a seemingly normal principal (Dylan Baker) sidelines as a serial killer; a group of kids go down to a quarry to investigate a local legend; a virginal girl (Anna Paquin) in a red riding hood outfit is chased by a vampire; and an old man (Brian Cox) is terrorised in his home by a young boy with a sack on his head, who also crops up in the other stories in one way or another.

The stories themselves are not terribly new or inventive - even the nice take on the Little Red Riding Hood story during the Anna Paquin sequence feels like something that has been done a lot of times before, it certainly has a similar feel to Neil Gaiman's 'Snow, Glass, Apples', without the subtlety - but Dougherty's direction is so alive and stylish and his cast are so exciting that the lack of originality quickly falls by the wayside and the film gets down to being damned entertaining.

The stories fall into two categories: someone disrespects the traditions of Halloween and is duly punished, which are really creepy, and 'twist in the tale' stories that are darkly humourous and a tad malicious. Both kinds work well but the twists at the end of the latter kind are quite obvious - though there's a certain gleeful malice to the Dylan Baker ending - so I found myself enjoying the more atmospheric, campfire story sections more since they were genuinely effective and got under my skin, occasionally making me laugh, whilst the 'twists' made me laugh but never got under my skin.

The standout performers are Dylan Baker, whose delivery of the words "candy apples" will long haunt my dreams, and Brian Cox, whose segment is easily the creepiest, largely due to its all too literal interpretation of the 'blade in the candy' myths of Halloweens gone by, but also because he really sells the fear that his character is feeling. He plays an old man who scares children so much that they drop their candy on his porch and run off, allowing him to steal them. However, this brings the wrath of Sam, the 'Spirit of Halloween' of the film, on his head, and he is subjected to a harrowing 20 minutes or so in which he is repeatedly harassed and mutilated in some really quite unpleasant ways.

Though that section is creepy, the film as a whole is not terribly scary, instead settling for an atmosphere of light dread that I associate with a really well-told ghost story. The fun comes more from the exuberance of the actors, the intentionally melodramatic tone and look, and that cerebral enjoyment that comes from watching a really good, well made horror film and appreciating how good it all is. Dougherty is very energetic in his direction and playful in his writing, giving each scene a brisk feel and refusing to let the film slow down too much between outbursts of eeriness.

The order of the stories and the way in which they are edited together did bother me somewhat, though. Several segments are interwoven with each other whilst others aren't, so you get the sense that half of the film is just a series of loosely interconnected events and the other is an anthology of scary stories. This may have been done to give the Brian Cox section more time to breathe, since a lot would have been lost if the film had cut away from it to something else, but I couldn't help but think that separating them all cleanly and making it into a real anthology film would have made it a tiny bit better. Though, as it is, it's a well made and really enjoyable bit of fluff that is well worth checking out.
By Edwin Davies
Labels: film review
Newer Post Older Post Home