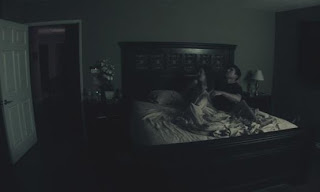 A bit of background for anyone unfamiliar with the story of Paranormal Activity and who, unlike me, doesn't spend a little too much time reading about box office performance.

In 2006, Oren Peli decided to make a film about a couple being haunted by an otherworldly force in their home. After taking a full year to prepare for the film - even redesigning his house to fit the story - Peli screened it at festivals and began giving out DVDs in the hope of finding a distributor. Eventually, one DVD wound up on Steven Spielberg's desk and he was suitably impressed enough to agree to fund a big budget remake. Then something weird happened. The film got such strong reactions from a screening with an audience that the remake was canned and the original was released. As of the time of writing, a film made for only $15,000 has grossed over $40 million and rising.

Knowing all this going in, I had very high expectations. Its surprise success suggests that Paranormal Activity has captured the imagination of America in a way that few recent films have and a lot of the buzz suggested that it would be TEH SCARRIEST MOVY EVAH! but would it meet these expectations?

Initially, I didn’t think that it had. I left the cinema thinking "that was okay, nothing special", having enjoyed the film but not been bowled over by it. Then I started walking home, and realised that I was looking over my shoulder, my heart was beating quite fast and I was purposefully taking the long way home so as to keep to well-lit main roads. Clearly, the film had gotten to me.

Why did it affect me so? It's hard to say. It certainly wasn’t the story, which isn’t especially new; a couple hear things at night and the boyfriend (Micah Sloat) decides to set up a video camera in their room to see if anything weird happens, which it promptly does. We hear banging, doors move of their own accord and Katie (Katie Featherston) suffers violent nightmares, all accompanied by an ominous and oppressive white noise. This is a story that has been done before in the likes of The Orphanage and, most obviously, Poltergeist (they even bring in a psychic at one point) so there is little surprising about the plot.

Was it the intimate style of the film that got to me? Again, I wouldn’t say so. The film is presented as in-camera footage of Micah's recordings, which consist of night-time observation and day-time aftermath, which mostly consists of Micah and Katie fighting over how best to deal with their intruder and the strain its presence has on their relationship. Off the top of my head I can think of half a dozen fairly recent films that use that same or a similar conceit and most of them did it much better, though none as economically.

What sets the film apart, though, is its atmosphere and the relationship at its centre. The film features no music, almost no blood and relies almost entirely on in-camera effects. These create a believable environment for the film, maintaining the verisimilitude of the concept, and Peli uses them to very slowly build the tension. It wasn't until about 20 minutes in that the film got a reaction from me, but it shocked me because I hadn't realised how engaged I was and how much I was dreading the next night-time sequence. Dread is really the key word here since Peli's ability to establish and maintain that sense of dread is crucial to the ambience of the piece; its strength lies in the way that it often frustrates your expectations by giving you the set-up without the punchline to keep you anxious, making the moments when the scares come all the more effective. Then again, it's not that scary, it's got more of a creepy atmosphere to it which is actually more effective.

Micah and Katie are central to the film, being pretty much the only characters on screen throughout, and the way in which they interact with each other really feeds into the growing sense of doom that suffuses the film. Early on, as is so often the case in films that use the 'real event, handheld camera' idea, they are quite annoying as we see them being overly jovial for the camera and joking about their endeavour. As the film progresses, though, it takes the audience closer and closer to them, taking away the wall that separates us and letting us see the characters as they really are; terrified and powerless in the face of forces they can’t possibly comprehend or hope to defeat.

Micah, in particular, is a great example of this aspect of the film. He presents this alpha-male ‘this is my house and I’ll fix the problem’ machismo, which manifests itself in his repeated goading of the demon, but when anything actually happens he is completely helpless to stop it. Furthermore, he’s so afraid of being emasculated, either by the demon or by any experts he might call in to help fight it, that he winds up making the situation much worse for the real victim, Katie. His powerlessness, even if he can’t perceive it himself, ultimately defines the film.

It is a film that is almost destined to divide people – at the end of the screening I attended someone proclaimed loudly that the organiser of the festival should get his money back – but if it works for you then it'll really get into your head. It clearly worked for me, which is why I am writing this in a very brightly lit room and is also why I am acutely aware of even the slightest noise being made in my house at the moment.
By Edwin Davies
Labels: film review, films, Paranormal Activity, reviews
Newer Post Older Post Home