The Imaginarium of Doctor Parnassus

"Nothing's permanent, not even death" 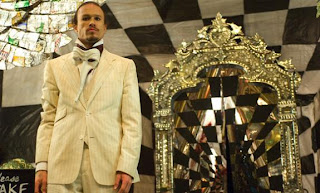 I'm a big fan of Terry Gilliam; his animation was one of the first things that really drew me to Monty Python (and it's those grotesque cut and paste designs that are probably the most enduring part of that series) and I feel that he is one of the most frustrating and sporadically brilliant film-makers working today. Even when his films, such as The Adventures of Baron Munchausen, don't work I still find something interesting in them and I look forward to each of his new films with relish.

It should come as no surprise to anyone who knows me that I followed the development of The Imaginarium of Doctor Parnassus with great interest when the project was first announced in 2007. The concept art that was put online suggested that Gilliam had once again hit upon an idea that would allow his singularly creative mind and eye to work wonders and create worlds that his audience would not have seen before. Everything seemed to be going fine for a director whose name is rarely associated with trouble-free projects.

Of course, we all know that things did not remain fine and the project was seemingly
dead in the water, apologies for the metaphor, after the tragic death of Heath Ledger on January 22, 2008. Ledger was not only the star of the film, playing the charming but shiftless Tony, who joins the traveling circus of Doctor Parnassus (Christopher Plummer) and becomes involved in a bet between Parnassus and the Devil (Tom Waits), he was also one of the main reasons that the film had received funding in the first place.

At this point, my interest in the film reached a fever pitch as I, along with many Gilliam fans, wished for the film to be saved, for some good fortune to go the way of someone who has had simply rotten luck when it comes to getting films made. And this salvation came in the form of Johnny Depp, Jude Law and Colin Farrell, who took on the role of Tony as he appears once he travels through the Imaginarium, a magic mirror that brings the imaginations of anyone who passes through it to life, allowing for Ledger's performance to remain intact and the film to be completed.

After so much, can the film live up to the expectations that are placed upon it?

The short answer is a reluctant "No", though it is one that needs qualification.

Visually, the film is a real tour de force and showcases some of Gilliam's best use of CGI to date, having previously struggled with digital effects on the mis-judged Brothers Grimm. The film takes place in present day London and in the Imaginarium and both have incredibly different feels to them. Gilliam shoots London as a dark and grimy netherworld full of drunken louts and kids with DSs who aren't interested in the magic and old-style of storytelling that Parnassus has to offer - you have to wonder if this is how Gilliam perceives himself these days - and these sequences have real texture and substance to them.

The Imaginarium stands in stark contrast to reality, which is to only expected, since it is looks much more like a cartoon world, though it depends on who is going through the Imaginarium at the time. It could be a world of giant perfume and shoes, of bubbles and balloons, of seas of bottles and vast deserts, all are possible and all are realised to stylish effect.

Unfortunately, the merits of the Imaginarium sequences, i.e., their visual splendour, also comprise part of their downfall. The worlds don't just look cartoonish, they have cartoon physics to them; Tony can climb a giant ladder which breaks in two, then use the halves as stilts to walk great distances, fall over and remain unharmed. These sequences, which play host to some of the more dramatically important and exciting set-pieces of the film, are largely devoid of drama and excitement because they feel so fake and struggle to create any tension.

This constitutes a major problem for the film since at least a third of it takes place within the Imaginarium. When used sparingly, such as during Johnny Depp's turn as Tony, they can make for magical little vignettes, but any extended time in the Imaginarium deprives it of its power. This is perfectly illustrated in the film's first Imaginarium sequence; a drunken man, having chased Parnassus' daughter Valentina (Lily Cole), finds himself in a dark forest made entirely of cardboard trees (a possible nod to Jean Cocteau's 'La Belle et la Bête'). He stumbles and finds himself lying in a lake of beer bottles in a dank and muddy underworld. It's a brilliant sequence because its short and because it uses a more realistic visual style, complete with physical sets and brooding lighting, to portray a surreal incident that is completely at odds with the plastic sequences that pepper the rest of the film.

(Incidentally, Johnny Depp's scene is probably the highlight of the whole film. In it, Tony talks to a woman about celebrities who died young, saying that she should not be sad about their passing since "they will never grow old, never grow sick" and will live on forever in the minds of those they knew and inspired. It is as touching a tribute to Heath Ledger as has been paid by almost anyone, yet it doesn't feel like something that has been crowbarred in for the sake of it, instead fitting the contours of the story nicely.)

The story is problematic as well since, by its very nature, it breaks a little too neatly into little bits of film, never quite coalescing into a fluid narrative. Like Munchausen (which was also written by Gilliam and his Parnassus co-writer, Charles McKeown) it feels much too episodic and whimsical, with the whimsy and the dirt being too cleanly separated from each other. Gilliam's best work has always had whimsical flights of fancy underpinned (and undermined) by a dark, often bleak, reality: whether it's Sam Lowry's dreams of flights occurring against Brazil's dark dystopic dreamscape or Tideland's uncomfortable mix of childish fantasy with drugs and death, Gilliam's work needs that connection between the two to really flourish.

It also doesn't help that the story is muddled and the rules of the Imaginarium are never really explained. You pick them up as things go along, which is perfectly fine, but towards the end I found myself asking some rather obvious questions that were never resolved, such as, "If Doctor Parnassus has to be in a trance for the Imaginarium to work, how can he show up in the Imaginarium at the end?", which then led me to questions like "And why didn't he appear at an earlier juncture and stop bad things from happening?" There are probably explanations for these questions out there, but they aren't in the film and it seems at best clunky and at worst amateurish for these little bits of plot to be left dangling.

It's hard to watch the film and not wonder what it would have been like had Heath Ledger lived. The scenes featuring him and the scenes that don't feature him are so hugely different in look and texture that it looks as if Gilliam may have brightened up the colour palette to contrast with the feelings that he and his crew must have been feeling after the death of their friend. Then again, maybe those sequences were always meant to be like that and I'm just trying to find an explanation that will allow me to simultaneously criticise the film and absolve it by saying it's not really Gilliam's fault.

I've focused too much on the negative here, and gone on far too long, so let us finish with the positives. The cast are all great, particularly Tom Waits, who oozes cool and barely concealed menace as Mr. Nick, and Lily Cole, who is really quite luminous as Valentina; the visual effects are really very good throughout even if I don't necessarily feel that they are put to good use; and the story, whilst muddled, does have moments of real sweetness in there that briefly ground the film before it flies off into the realm of the fantastical.

So, back to that question posed earlier; does The Imaginarium of Doctor Parnassus live up to expectations? No, but there is a lot to like in there and, for all its problems, it has moments of brilliance and invention that justify it. Like a lot of Terry Gilliam's work, The Imaginarium of Doctor Parnassus is as frustrating as it is enjoyable. For every problem there will be two or three moments of visual poetry or a great flourish by Waits that will redeem the film, if only briefly, and those moments of grace are worth waiting for.
By Edwin Davies
Labels: film review
Newer Post Older Post Home