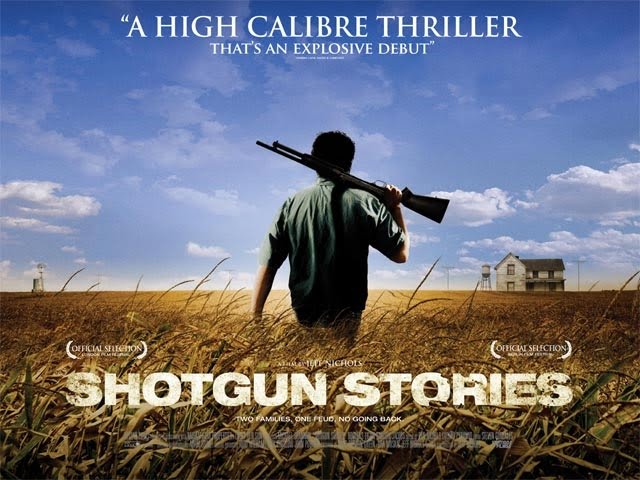 In a small town in Arkansas, two groups of half-brothers are engaged in a feud that started years before when one half of the family - consisting of Son (Michael Shannon), Boy (Douglas Linon) and Kid (Barlow Jacobs) - was abandoned by their father, who then went on to sire the other half of the family involved. The father's sudden death reawakens the slumbering rivalry, and an ill-timed outburst at his funeral sets all his sons on a path of increasingly violent reprisals.

That synopsis suggests that Shotgun Stories, from first time writer-director Jeff Nichols, is a simple film that retells a story that has been done time and again. The latter part of that sentence may indeed be entirely true, since there have been countless tellings of the "feuding families commit acts of violence upon each other" story over the years. However, to suggest that it is a simple film is to do a great injustice to one of the best American films of the last few years and a startlingly accomplished debut.

The story may be familiar, the visual style may be sparse and the dialogue even sparser, but far from reducing the power of the film they actually heighten it. There is an almost classical sense to the film, a sense that it is an elemental story carved in stone, etched into the very ground itself. There is an air of high tragedy to proceedings as the characters wend their way towards their seemingly inevitable demises. We see their blood feud escalate from one ill-judged comment to a quick brawl at a petrol station to murder, knowing from the start that the film was always going to go this way, and half-suspecting that we know where it will end.

Nichols surprises us, though, by actually giving his characters that same sense of futility, rather than making it solely the knowledge of his all-seeing audience. Even early on, one of the rival Hayes boys tries to keep the peace by talking to everyone and saying that he doesn't want there to be any violence. Obviously he fails in this and blood is spilled, but the fact that he knows this is going to happen speaks to the awareness the characters have of their hatred for each other, how destructive it is, and how it will eventually destroy them if left unchecked. This is beautifully encapsulated in a later scene in which Son goes to see his mother and tells her that she "raised us to hate those boys, and we do. Now it's come to this." This one line captures the depth and power of the film, its sense that the characters are trapped by their pasts and driven by it even though they know that they should not be. The tragedy is heightened because they know that things could be better, they just don't know how to break free of the cycle that was started by their parents and which they now have to live through. Yet the film has the strength and humanity to offer a chance of redemption at the last possible moment.

The film isn't drab and portentous, though. It is shot through with moments of humanity and humour, with the brothers engaging in quiet, familial banter. Nichols peppers the early part of the film with seemingly disparate events, such as the radio in Boy's van being broken, co-workers discussing the shotgun wounds on Son's back, or Kid's friend wanting to leave his car on their property, that paint the film as a wry comedy of manners about the working class in America's backwater towns. However, as the film progresses and the seriousness of the brothers' rivalry starts to claim casualties on both sides, these early comedic moments take on a greater resonance, forming crucial plot points - the friend has to keep revisiting Kid so he can impart information about what the other boys are up to - and adding poignancy to the film's more despairing moments.

The whole cast are great, delivering performances that hint at the obvious Western influence without appearing arch. Michael Shannon radiates a weary toughness reflected in his physical scarring and he has a real chemistry with Linon and Jacobs, a sense that they all know each other so well that they don't need to talk about their feelings all the time, or talk at all. That the film stumbles whenever they do talk about their feelings, such as a scene in which Son offers Kid relationship advice, underlines just how powerful it is in its non-verbal moments.

Shotgun Stories is a funny, tense and powerful film about violence, revenge and family that I heartily recommend to anyone looking for a piece of intelligent American cinema that does away with the irony and postmodern archness to tell a strong, allegorical story in a way which is engaging, enriching and enjoyable.
By Edwin Davies
Labels: film review
Newer Post Older Post Home