"I spent ten years building this industry up, and I've spent the last 35 years trying to tear it down" 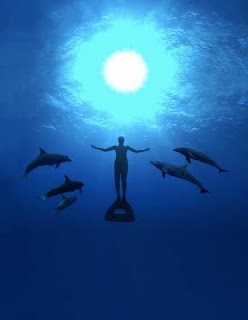 I wasn't quite prepared for The Cove. I wasn't prepared for it to be quite as exciting as it is, nor was I prepared for how much of an emotional impact it would have on me, bringing me to the verge of tears several times during the course of the screening I attended.

The Cove is a truly harrowing documentary about dolphin hunting in the town of Taiji in Japan. Every year from September to March hunters spend day after day capturing dolphins, some of which are chosen to be taken to be put into captivity in parks all over the world, but most are taken to a secluded cove where they are slaughtered. The film follows Ric O'Barry, who in the 1960s more or less created the dolphin trade through his work on the Flipper TV show, as he and a team of dolphin enthusiasts try to get footage of what takes place in The Cove. What follows is equal parts passionate nature documentary and heist film, as O'Barry and the director, Louis Psihoyos assemble a team of experts to place hidden cameras in the cove and expose what goes on there to the world.

The triumph of The Cove is its ability to be a number of different things simultaneously. On one level, it is a documentary about the dolphin trade and the damage that it does not only to the creatures themselves but also to the eco-system. We are shown many scenes of dolphins languishing in captivity as O'Barry and a host of experts lay out for us the abuses of the trade and the harm that it does to these majestic creatures. In order to best illustrate how the dolphin trade works, the film dissects the I.W.C. (International Whaling Commission), the body which is intended to protect cetaceans from being overhunted. Early on we learn how toothless the organisation is - thanks to a loophole in its charter, dolphins are not protected so Japan has been allowed to increase dolphin hunting as their whaling has been curtailed - as well as the extents to which Japan will go to try and get the ban on whaling overturned; we learn that the Japanese government has been paying off bankrupt countries that have no stake in whaling so that they will join the I.W.C. and vote with Japan. The film paints a picture of a paranoiac industry full of conspiracy, intimation and, on some occasions, murder, with O'Barry citing two specific examples of his colleagues being killed for trying to stop whaling in countries such as Russia. This part of the film is frustrating, passionate and powerful.

The other way in which the film works is as an exhilarating caper movie. In order to get footage of the cove in Taiji so that they can expose what the fishermen are doing to the world, and with no legal means of doing that, Psihoyos and O'Barry are forced to use illegal means, i.e., placing hidden cameras and recording equipment in The Cove at night. To accomplish this they have to bring together a team of experts, from divers to engineers who can construct fake rocks for them, and plan out how they are going to achieve their goal. The hostility of the villagers to any incursion, coupled with the sheer terror of breaking into a secret compound at night, adds a palpable sense of dread to the raids and makes their eventual success all the sweeter, even though the results are so very bitter.

The scenes of the slaughter are unsurprisingly devastating, but what shocked me was how beautiful some of the other moments of the film are. It's easy to be blasé about dolphins since we have seen them so often in nature documentaries before, but the footage of dolphins in the wild, complimented by interviews with members of the team in which they talk about swimming with dolphins with pure beatific joy and contrasted against footage of them in captivity, adds a power to the film that I was not anticipating and which ultimately makes the violence at its core all the more terrible.

At the heart of the movie is O'Barry, whose guilt and remorse are palpable. He has dedicated his life to trying to save dolphins because he played, or at least he believes that he played, such a large part in bringing about the current level of slaughter. We learn that O'Barry has been arrested numerous times for trying to free dolphins and has become a sworn enemy of the very industry that he helped create. He is a tragic figure who may very well never achieve his dream of stopping this monstrous practice in his lifetime, but his efforts and willingness to put himself on the line are awe-inspiring.

A passionate, brave and dangerous piece of film-making, The Cove is absolutely stunning and deserves to be seen by as many people as possible. If it affects you as deeply as it did me, visit these websites and see how you can get involved.