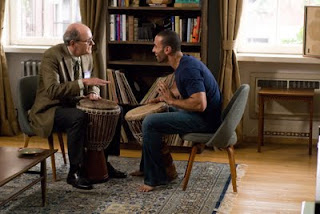 By rights, The Visitor should be a bad film. Not 'bad' in the old Pauline Kael, it's a great piece of trash sort of way, but genuinely terrible. On paper, it seems like the sort of woefully misguided film that would be described using that most unctuous of terms, ''life-affirming''.

Richard Jenkins plays Walter, a widowed economics professor living in Connecticut who has to go to New York for a conference. He does this against his wishes since he wants to do his one class, work on his book and do as little as possible. He goes to New York and opens the apartment that he has owned for many years, but which he has not visited in a long time. Walter discovers that Tarek (Haaz Sleiman) and Zainab (Danai Jekesai Gurira), a pair of illegal immigrants, have moved into his apartment.

Having read that synopsis, which only covers the first 20 minutes or so of the film, you would be forgiven for thinking that the film was a worthy slice of Oscar-bait primed to induce tears (of bleeding-heart liberalism or boredom) come February. And certainly the film seems to follow in that mode since, after an initially hostile confrontation between the characters, they learn to get along despite their inauspicious introductions and cultural differences (the film points out that Tarek and Zainab are both Muslim), particularly Walter and Tarek, who bond over a love of Afrobeat drumming. And the film features numerous scenes of the two men wordlessly drumming together, enjoying the rhythm of their playing.

These ingredients could very easily made for either an overly earnest and dour awards contender or a dangerously flippant comedy of manners, but it winds up being neither, turning instead into a genuinely affecting drama that, whilst dealing with complex issues, is not actually about complex issues.

Thomas McCarthy, who wrote and directed the film, has a real ability for making these kinds of films, i.e. films that, when taken down to their constituent parts, sound like they should be really terrible. His debut, The Station Agent, could best be summed up as a film about a dwarf who moves to a small town, makes friends and changes peoples' lives. That sounds sickeningly twee, but the result is a subtle, melancholy and beautiful piece of cinema that must surely rank as one of the best films of the decade. The Visitor, whilst not quite attaining those heights, does get very close.

McCarthy's writing plays a big part in making the film so great. There are no trailer-worthy lines in the film, no sections of dialogue that could be used as a tagline, only real, honest language and conversations between characters that seem wonderfully real. Certainly, they are heightened to an extent and the situation that serves as the jumping off point of the story - old man allows immigrants to stay in his house having only known them for a matter of minutes - does test the bonds of believability, but the understated language and characterisation make the story feel much more organic than it might at first seem.

It also helps that McCarthy has assembled a terrific central cast. Richard Jenkins, who deservedly gained an Oscar nomination for his role, is just marvelous. His initial reticence and stagnation are quickly overcome by the joie de vivre of Tarek, who overflows with enthusiasm and becomes fast friends with Walter. Their friendship, evolving as it does out of a mutual sense loss - Walter for his wife, Tarek for his father and homeland - and love of music forms the basis for the first half of the film and makes it all the more gut-wrenching when Tarek is picked up by immigration and put in a detention centre.

It is here that the film really comes into its own, as Walter is revealed to be an American hero in the mold of Atticus Finch, albeit an Atticus Finch who has had his spirit broken somewhere down the line. He tries everything in his power to get Tarek out of the centre and to get him citizenship. He rails against the system not necessarily because of a hatred of the government or similarly trite reasons, so much as because he wants to do what is right after doing nothing for so long. Jenkins' performance is measured and haunting but also allows for some moments of great warmth and humour, a combination he also managed in Burn After Reading.

Thomas McCarthy has only made 2 films in 6 years (you can add a .33 onto that for his story credit on Up) and, even though I would love to see him make films every year, I kind of hope that he keeps up this pace. If it means we will see films of this quality every few years then it'll be worth the wait.
By Edwin Davies
Labels: film review
Newer Post Older Post Home