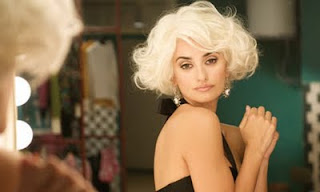 Harry Caine (Lluis Homar), a blind writer for hire, is approached by Ray X (Rubén Ochandiano) to help him pen a script about Ray's recently deceased father. Harry decides not to work with Ray, and that would seem to be the end of it. Except nothing is what it seems; Harry is in fact Mateo Blanco, a successful director of dramas who, 14 years earlier, began work on his first comedy, a farce called 'Women and Suitcases' and began an affair with Lena (Penelope Cruz), the mistress of a rich businessman (José Luis Gómez).

Broken Embraces feels like a very personal film for director Pedro Almodovar. He has dabbled in films about film-making in the past, most notably on his censor-bothering masterpiece, Bad Education, which also revolves around a director looking back on his past, but this feels even closer to his heart. The film-within-a-film, Women and Suitcases, is a none too subtle homage to his first international hit, Women on the Verge of a Nervous Breakdown, right down to having actors from that film reappear (in different roles) in Women and Suitcases. Under the noir trappings of the plot is a film that clearly must mean something to Almodovar if he is willing to flag up the connection between his work and Mateo's.

What that connection is is harder to identify. It's certainly an emotionally draining film, one whose noir-inflected plot heightens the drama between the characters. The story of Mateo and Lena is beautiful yet inherently tragic; we see this young couple fall in love and find something in each other that they have not found in anyone else, yet we know from the segments set in the present day that they don't end up together, and the mystery at the centre of the film is what was it that prevented them from living happily ever after.

It's a propulsive and intriguing plot that manages to keep the movie fascinating even when Penelope Cruz isn't on screen. And her absence is noticeable since she completely dominates the film. Lena is a tragic heroine caught between her love for Mateo and her lover, a man that she admits to finding repulsive. She cannot leave him, though, since he is bankrolling Mateo's film, so she has to stay with him if she wants Mateo to finish the film that they have been working so hard to make. Cruz is absolutely mesmerising, projecting the strength and vulnerability that won her an Academy Award nomination for her previous project with Almodovar, Volver. He clearly know how to get the best out of her and her performance here ranks with the best work she has ever done.

Lena's obsession with completing the film, essentially prostituting herself for her art, is indicative of the concerns of the film as a whole. It is a film about the transcendent, redemptive power of cinema. Both Lena and Mateo obsess over the film to their detriment, yet we never question their commitment because we understand that their art is what defines them, and Mateo losing his sight, becoming a well-paid but unfulfilled writer, is almost as tragic, if not more so, than the fact that he and Lena can never be together.

Considering that its main character is blind, it shouldn't be a surprise that the film is concerned with sight and the visual nature of cinema. It is one of Almodovar's most beautiful films to date. His use of colour, always so strong and vivacious, is at its sensuous best here, and his camera glides through the film, luxuriating in all the details for our delectation.

For all its positives, the film seems to lack whatever it is that makes Almodovar's films so special. It seems to be retreading ground that he has covered before and, by evoking the memory of his earlier work, it simultaneously highlights how far he has come as an artist, how subtle and nuanced he can be, whilst demonstrating how this film as a whole seems to be something of a step backwards for him, or at least a step sideways. It lacks the texture and richness of his last few films, and even though Penelope Cruz and Lluis Homar anchor the film, they spend too much of the film apart and she spends too much time completely absent, depriving the film of life and vitality that mystery and intrigue cannot replace.

Perhaps it is just too personal. Maybe he is trying to say something about his own art and, in doing so, has made a film which is more for himself than for anyone else. It's not an empty film, indulgent or terrible by any stretch of the imagination, I just can't help but think that he has erected a wall around the heart of the film and that we can only peer over the top, glimpsing something great and only perceiving something good.
By Edwin Davies
Labels: film review
Newer Post Older Post Home