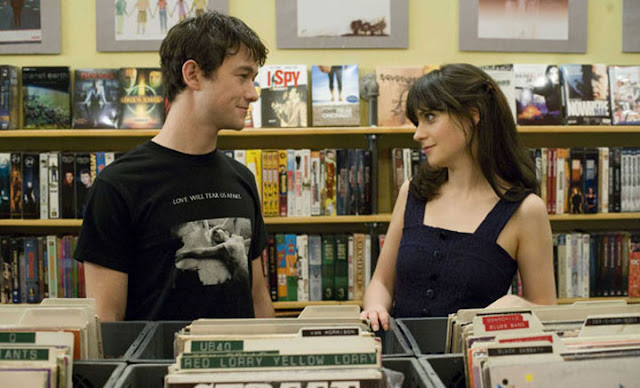 Tom (Joseph Gordon-Levitt) is a 20-something who works at a greeting card company, though he trained as an architect, and is muddling along at a fairly lacklustre pace when he meets Summer (Zooey Deschanel), the girl of his dreams. They like the same music, they have the same sense of humour, they seem tailor made for each other. Except Tom believes in true love and fate, and Summer doesn't. They break up, and Tom starts looking back on their time together.


Watching (500) Days of Summer was an odd experience. I've often watched films and thought that the film I was watching was not made with me in mind. This applies to films I like and films I don't like. The notion that films are not aimed at me, that they are something I can come to from a completely separate set of experiences and still appreciate, is something that I think is central to filmgoing.

(500) Days of Summer is the first example of a film that seems to have been made specifically for me, or at least for people like me. For the first time, I felt like I was being treated like part of a demographic, that someone somewhere had sat in a room and thought 'what would 20-something, vaguely Indie types like to see in a film?' then reeled off a bunch of cultural references that would be pleasing to the theoretical 'US' of which I am, apparently, a part. Everything about the film seems pitched at a certain type of person, from the hip, but not too hip, music choices (the film opens with 'Us' by Regina Spektor, the main characters first connect over a mutual love of The Smiths, etc.) to the look of the film, a look which could best be described as the Fox Searchlight look - square angles, bright palette, no sense of the place within which the story is set - and the nature of the film's narrative, which jumps around to no particular purpose, all conspire to craft a film that should, by all rights, be as cynical a product as Transformers 2, except aimed at the people who hate Transformers 2.

Even the casting seems to have been focus grouped. "Let's get Joseph Gordon-Levitt in, he's a bit famous but a bit edgy at the same time, people like him. And Zooey Deschanel. She's sort of famous and the dream girl of pretty much everyone who would see this film." And both of them are perfectly fine and do their jobs perfectly well, but you expect that the reason for their presence in the film is more mathematical than artistic. There's a distinct air of artificiality about the film, one that has nothing to do with the way in which the film breaks the fourth wall every so often. It's all so calculating.

And yet, I liked it.

Maybe it's because I established an honest relationship with the film very early on; it would manipulate me, I would acknowledge the manipulation and move on. Every time Doves came on the soundtrack or we were told that Summer had put a Belle and Sebastien quote in her high school year book I rolled my eyes then let the matter drop, content to let the film depict a fairly vacuous relationship between two people who are not so much characters as the sum of their Facebook profiles. It wasn't profound in its discussion of life and love, yet it wasn't trying to be, so I was happy to let it be and found myself enjoying the gentle wit of the script and the genuine chemistry between its leads.

It might have been that, but what is closer to the truth is that there are moments of boldness that litter the film that suggest a genuinely interesting idea at its heart, behind all of the money men rubbing their hands with glee. There were scenes in it which really encapsulated some essential truths about being young and being in a relationship that were expressed in a provocative way. Whether it be having Tom, after sleeping with Summer for the first time, look in a car window to check his reflection to see Han Solo reflected back at him, then engage in a big song and dance number with passersby, or the use of split screen to show the vast difference between Tom's expectations of what will happen at a party and what actually happens. These moments are inventive and expressive of a personal vision that is lacking from the rest of the film, hinting at what could have been if it wasn't so vigorously pursuing the Hipster Pound.
By Edwin Davies
Labels: film review
Newer Post Older Post Home