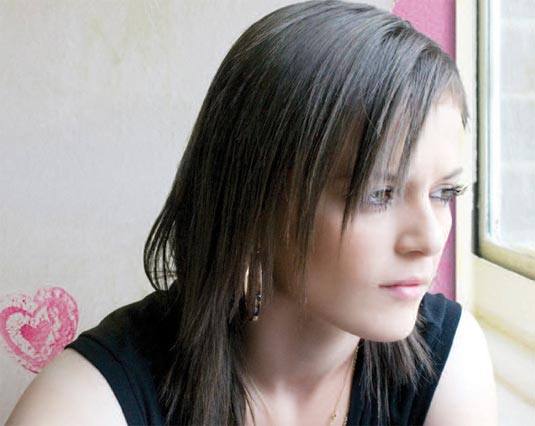 Andrea Arnold's second feature is, without a doubt, one of the most uncomfortable films I've ever seen. That's not to say that it is a 'tough' film or a 'difficult' film, in the way of something like Irreversible, but rather that it is so close and claustrophobic, so intensely intimate that I found myself feeling very, very uneasy throughout.

Mia (Katie Jarvis) is a young girl living on a council estate. Having been excluded from her school and fallen out with most of her friends as a result of her volatile behaviour, Mia spends her days walking around the estate, getting into fights and dreaming of becoming a professional dancer. She lives with her mum (Kiersten Wareing) and younger sister and Mia feels ignored by everyone. This starts to change when Mia's mother brings home Connor (Michael Fassbender), a charming and friendly man who pays attention to Mia and takes an interest in her dreams of dancing. As they spend more time together, inappropriate feelings start to arise in Mia that could have dire consequences.

As I said, Fish Tank is an uncomfortable watch. The growing infatuation between Mia and Connor forms the background for the first half of the film as it moves inexorably towards the seemingly inevitable consummation of their feelings for each other. Or at least Mia's feelings for Connor, since it is not entirely clear what Connor feels towards Mia. The tension between the two leads and ambiguity about how they really feel about each other which, on top of the already great discomfort that arises from seeing a 15-year old girl and a man in his 30s flirting with each other, generates the first level of discomfort that we must pass through to experience the richness of the film.

Much of the credit for this should be given to Jarvis and Fassbender, who both make their characters feel incredibly likable. If they were as abrasive as Mia seems initially or as sleazy as Connor's character could be then the dynamic of the film would fall completely flat as it would be difficult to care about either of them. Both performers avoid these pitfalls by offering up performances that are honest yet guarded; they are both putting on fronts to protect themselves, but in doing so they reveal themselves to the audience. It's a delicate balance that they manage superbly and which ad considerable power to the sequences when their masks slip.

Arnold and her cinematographer, Robbie Ryan, create a look for the film which is harsh and digital, yet also evocative and sweet. The handheld style of shooting they employ takes us right down to Mia's viewpoint, giving the world of the film a realistic feel, but they use a very limited depth of field, so that anything much beyond what is immediately in front of the camera, which translates into anything that is beond Mia, is out of focus. This lends the film a terrific intimacy, making it so that the only things that seem important the audience are those things that are within Mia's immediate grasp and ensuring that we can never focus on something other than what is happening to Mia or what she is doing to others.

I can't really describe what is great about the film beyond the first half, sadly, since that would involve ruining many of the plot points that came as a surprise and a shock, but I can say that what is most impressive about the film is that it manages to maintain momentum after Mia and Connor's interest in each other runs its course. Once that plot strand has been explored, Arnold takes the film in strange and unexpected directions, including an excursion over some fields that is absolutely riveting. What starts out as a seemingly familiar story ends up as one of the most exciting and refreshing films of the year.
By Edwin Davies
Labels: 2009, Andrea Arnold, British Cinema, film, film review
Newer Post Older Post Home