You always wanted too much from me, and I'm very mad at you. 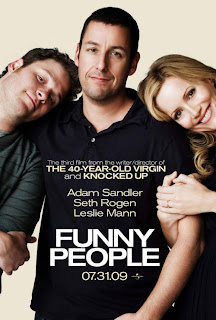 Before reviewing Funny People, it's best to consider it mathematically.

Funny People is two-thirds of a good film, in that the first two thirds are really strong and the last third is knuckle-chewingly terrible, but the opening two-thirds are riddled with problems which in turn make them only two-thirds good to one third bad, whilst the final third does have enough redeeming features in it to make it about one-quarter good. So, we have two-thirds of two-thirds, which is 44%, and 25% of one-third, which is 8.33(recurring). Add this together, and we can conclude that Funny People is 52.33% good to 47.67% bad.

Let's consider the good two-thirds. The relationship between Ira (Seth Rogen) and George (Adam Sandler) is fascinating, largely thanks to Sandler's ability to play an embittered and angry rich man isolated by his wealth and confronted by his own mortality and his profound existential loneliness. He needs Ira in order to get by on a daily basis, yet he hates having to depend on someone so there is a constant sense of antagonism in their friendship that frequently veers from joking into abuse. It's a relationship that feels very volatile and real, something that could only have come into being during such heightened circumstances as George facing his own death.

It also works as an examination of Adam Sandler, albeit through the cypher of George Simmons. The parallels between the two men are manifold, from their level of success to the types of movies that they made their money with (I could easily see My Best Friend Is A Robot, co-starring Owen Wilson, being made as a Sandler vehicle) and the film even opens with real footage of Sandler making prank phone calls when he was younger (keep an eye/ear out for super-young Janeane Garofalo, Ben Stiller and Judd Apatow). I don't know how aware Sandler was of what Apatow was doing with the story, but the fact that he is prepared to be so thoroughly unpleasant and to utilise so many of his usual tricks (you want annoying voices? He's got 'em!) to that end suggests that the two of them were in cahoots when it came to deconstructing Adam Sandler, the comedy icon, though I think that one or both of them did mediate it to prevent it getting too dark, which is more the pity.

The film represents a crossroads for Apatow as he moves into dramatic territory that he has dabbled with in previous films but never to such an extent. Rather than wholly embrace that ethos and strike out for something new(ish) and make what he clearly wants to make, a James L. Brooks weepy mixed with a Hal Ashby subdued comedy, he relies on his standard dick-and-fart jokes as a crutch. However, rather than propping up the film they frequently trip it up. Whenever things get to serious or interesting, someone will swear or say something stupid, not so much cutting the treacle as burning the whole cake. It's very, very frustrating.

And that's without even getting on to the stand-up in the film which, for a film with 'funny' in the title, is painfully un-so. Often this is intentional, with comics like Randy (Aziz Ansari) serving to illustrate what Apatow considers to be bad stand-up, but that practiced by Ira and George isn't much better. There are some good routines in there, but most often they're just crass and dumb. Maybe it's just my taste in stand-up but I for one found it really tough to sit through so many routines that had so little impact.

The number of celebrity cameos in the film is also incredibly distracting, to the point that you end up with a scene in which George gets life lessons from Eminem, who then proceeds to scream abuse at Ray Romano. A sequence that is delirious in the moment, but really has no place in the film.

The number of routines and cameos showcases the other problem with the film; its general lack of focus. When the film was announced, many people seemed to think that it had the potential to be Judd Apatow's Annie Hall, the film that took him from being just a comedy film-maker to a film-maker of substance. Sadly, it isn't his Annie Hall, it's his Anhedonia. At two and a half hours, the film is way, way, way too long and there are so many bits that do nothing to enhance the story. Subplots such as a romance for Ira with another stand-up, footage of the sitcom that his roommate (Jason Schwartzmann) is on and the entire final third (in which a long-lost love plot is introduced) only serve to distract from the central relationship. You can't help but think that if Apatow had had what Woody Allen had, i.e., a really tough editor who could say ''this is terrible. Cut in half, get rid of the murder mystery and focus on the relationship with Annie'', then he could have delivered a film which was so much more potent and focused, not muddled and indigestible.

I think that people should see Funny People since, if nothing else, it boasts some great performances (I've not mentioned Eric Bana because he's only in the awful final third but he is great and is the only reason that that part of the film could be left in) and, for all its frustrations, it remains above all other things a very interesting failure.
By Edwin Davies
Labels: adam sandler, comedy, film review, films, funny people, judd apatow, Movies
Newer Post Older Post Home